Taiwan: A Copyright Case About Mascots For Soup Dumplings

In a recent decision on a copyright infringement dispute, the IP Court judges once again demonstrated their adeptness in interpreting problematic contractual wordings in the light of commercial context and purpose of transaction.  Polylight Design Co., Ltd. v. Din Tai Fung Restaurant Co., Ltd., 107 Min Zhu Shang 18 (Taiwan's IP Court, May 2020).  The second-instance judgment delivered by an IP Court panel led by Judge Han-Ching Wang readily drew the attention of Taiwan's IP people and food fanciers, because the defendant Ding Tai Fung (hereafter simply "DTF") is one of the most admired Taiwan-born restaurant franchises and the dispute pertains to the mascots for their signature dish, i.e. soup dumpling also known as "Xiao Long Bao."  DTF was held not infringing; yet this decision might have been appealed to the Supreme Court at the time of this report.

The contract in dispute is a "Consent Form Regarding 3-D Trademark" signed by Polylight the plaintiff in July 2009, which contains the following wordings:

We [Polylight] being the owner of the copyrighted works "DTF Baozai" and "DTF Longzai", considering that the 3-D trademark comprising the said works along with the Chinese, English & Japanese character names for DTF being used by DTF ... in the aim of gradually accumulating brand value and enhancing business image [through this use], hereby agree that DTF may apply for registration of a 3-D trademark containing the 3-D marks "DTF Baozai" and "DTF Longzai" with respect to promoting services related to serving soup dumplings and other foods, so as to accommodate DTF's needs in pursuing a thorough brand protection. The above-mentioned goods that we agree to be designated by the trademark application shall be produced exclusively by us during the term of the trademark rights.

According to the findings of the court, Polylight is a design studio which created the twin mascots Longzai and Baozai in summer 2008 without DTF's funding or commissioning.  The two parties did not begin a formal contractual relationship until several months later with the execution of a "Reciprocal Cooperation Contract" under which Polylight started to supply to DTF customized Longzai and Baozai dolls in different sizes for DTF to display and sell them. This is a smart arrangement of Polylight to build stronger control over their copyrights and products, because, among other things, it keeps DTF away from qualifying a "commissioning party" permitted by the Copyright Law to at least use the work he/she orders to an extent determined by the purpose of the commissioning relationship (if not simply becoming the economic rights owner of the work through a special agreement.)  As such, when the mascots along with their two-dimensional equivalents DTF developed showed strong trademark potential in 2009, DTF felt the need to procure a license from Polylight, hence the above quoted "Consent Form" which was drafted by DTF except for the last sentence which was added by Polylight. Obtaining the Consent Form from Polylight, DTF filed a series of trademark applications in 2009 for the two mascots and their 2D equivalents. As can be imagined, Baozai and Longzai got more freedom in the Flatland, appearing in a wide list of goods ranging from tableware to postcards and umbrellas, although it seems only a small fraction of DTF's goods bearing these 2D works were supplied by Polylight. This business relationship continued for another 6 years with DTF's use of the 2D devices remaining unaddressed in any legal instrument.  Soon after DTF ended their cooperation with Polylight in 2015, Polylight came to realize that this omission was problematic and hence made allegations of copyright infringement against DTF.  The critical question put before the IP Court is: did the license DTF obtained through the Consent Form extend to cover the 2D equivalents?  Particularly, was DTF licensed to register these 2D devices? 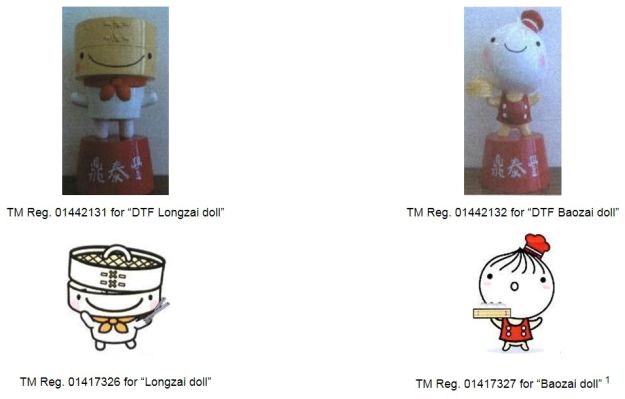 In the Copyright Law, there is a provision that, at first glance, sides with Polylight's argument that silence is not consent.  Article 37.1 of the Copyright Law reads: "The territory, term, content, method of exploitation, and other particulars of the license shall be as stipulated by the parties; particulars not clearly covered by such stipulations shall be presumed to have not been licensed."  However, the judges indicated in Polylight v. DTF that this rule can be applied only after certain conditions are fulfilled:

Yet Article 98 of the Civil Code provides, "In the interpretation of an expression of intent, the real intention of the parties must be sought rather than the literal meaning of the words." ...

When determining the scope of a copyright license, one should first examine the language of the license agreement and, where no explicit language is found or a loophole or ambiguity exists, one should further look into the real intent and purpose behind the contract [language] or explore the possibility of an implied consent.  If ambiguity is found in the text in terms of the scope of a copyright license, or if the text is inconsistent with the purpose of the license, then one should interpret the license scope in accordance with the intended purpose of the license. .... Only after it is concluded that the parties' real intention is not clear, no implied consent can be ascertained, and the purpose of the license cannot be determined, will it be allowed to make a no-license presumption accorded by Article 37.1

In fact, the IP Court's cautious attitude to the application of Article 37.1 does not begin with this judgment.  Before Polylight, IP Court judges had adopted this approach (which they called "copyright transfer purpose theory") in no less than 5 copyright cases to take an explanation in favor of the licensee and thereby precluded the application of Article 37.1.  So, what was the purpose the parties intended to achieve through the Consent Form?  The judges said:

The Consent Form was executed for the primary purpose of enabling DTF to obtain registration of these trademarks for DTF's use in promoting services related to serving Xiao Long Bao and other foods, in the aim of accumulating brand value and enhancing the corporate image. Simply put, the Consent Form was executed for the purpose of promoting DTF's services. As such, the Consent Form does not support an interpretation under which Polylight's license to DTF was meant to preclude registration of non-3D trademarks.

Given the two parties' cooperation of nearly seven years and in view of the usual circumstances in commercial transactions, Polylight should have known that DTF applied for and obtained registration of the 2D trademarks. However, during this time period, Polylight never expressed any objection [to the said trademark registration]. It was only until DTF notified Polylight that the partnership would be terminated on August 25, 2015 that Polylight first claimed that it did not consent on the registration of the 2D marks. Such continued silence is enough to cause DTF to form a justifiable reliance that Polylight had agreed to the trademark registration. All in all, after examining the long-term business relationship between the two parties and the common concept of the general public about such transactions, we found that the Polylight's interpretation of the Consent Form does not hold true and therefore should not be adopted.

In addition, 13 days before the Consent Form was signed, a staff of Polylight (and also a relative of its CEO) sent to DTF's contact window an email which contained a sentence expressing "in fact, we do not see any big problem in the part of trademarks." This correspondence was considered by the court as evidence showing that the parties did not intend to limit the license to merely 3D or 2D marks.

Perhaps owing to factors related to legal tradition and language system, contract interpretation in Taiwan's IP court, at least in some panels, seems to show a mild tendency toward a kind of contextualism approach.  Another recent example is Unity Opto v. TongFang (see our report) in which an ambiguous indemnity clause was interpreted also in light of the commercial context and purpose of transaction.

1. All pictures in this article were from the public trademark database operated by Taiwan's IP Office (TIPO).