Luxembourg: What Happens Now To Royal Warrants Of Appointment?

The death of Queen Elizabeth II on September 8, 2022, and the accession of King Charles III have shone a light on the system of Royal Warrants of Appointment: what they mean, how they are given and what happens in the event of succession.

The late Queen Elizabeth II reigned as monarch of the United Kingdom and 14 other Commonwealth realms for more than 70 years, and so people in these countries have grown very accustomed to seeing her Royal Arms adorning a variety of everyday goods: from mustard to dog food to tea bags. With the closure of the second-longest rule of any monarch in history, it is little wonder many are at something of a loss as to what this means for those products that proudly display that they are sold "By Appointment to Her Majesty The Queen."

Royal Warrants are not unique to the Commonwealth, with the royal families of Spain, Romania, Thailand and other monarchies issuing them. At present, there are about 875 Royal Warrants in the United Kingdom, held by about 800 Royal Warrant holders. Gaining one is a mark of prestige – functioning, quite literally, as a seal of approval from the head of state or one of their family members. Such recognition is highly coveted as it inspires trust among consumers and may also boost sales. Popular products that carry Warrants include Burberry clothing, Bendicks mints, Cadbury chocolate and Kellogg's cereals.

What is a Royal Warrant?

The first thing to note is that Royal Warrants of Appointment are not a form of Intellectual Property (IP) and are not regulated by the United Kingdom Intellectual Property Office. Rather, they are granted directly by members of the British Royal Family or their households to individuals or companies who supply them with goods or services. Each Warrant is granted for a period of five years and can be renewed after that. 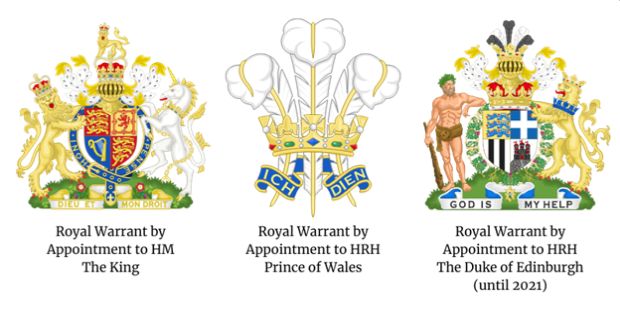 The emblem associated with a Royal Warrant of Appointment depends on the title of the grantor. (Image source: Wikipedia)

Royal Warrants date back to at least the 15th century when the printer William Caxton received one of the first in 1476. In the centuries since, the procedures for granting, displaying and renewing them have become well established.

The grantors of Warrants are determined by the monarch. Recent grantors included The Queen, The Duke of Edinburgh and The Prince of Wales (now King Charles III). All transactions are on a commercial basis: Grantees of Royal Warrants do not have to pay for them and receive no preferential treatment from the Royal Family. Grantees can display the Royal Arms of the grantor along with information about the goods and services provided. The rules of use are set out in detail by the Lord Chamberlain, and a Royal Warrant may be canceled at any time if they are not followed. It is worth recognizing that Royal Warrants are not issued for professional services such as those rendered by a law firm or to newspapers and similar publications.

Many grantees are members of the not-for-profit Royal Warrant Holders Association, but this is not obligatory. The Association states that about 20 to 40 Royal Warrants are canceled yearly, and a similar number are added.

What will change now?

According to the Association, when a grantor (such as Queen Elizabeth II) dies or abdicates: "The Royal Warrant document will become void, but the company or individual may continue to use the Royal Arms in connection with the business for up to two years, provided there is no significant change within the company concerned."

We can therefore expect to continue to see products carrying the Royal Arms of Queen Elizabeth II until 2024, as well as Warrants bearing the name of the former Prince of Wales. After this time, the insignia will either be removed – if the Warrant is not replaced – or updated to indicate the new grantor. However, the Association also states that the Royal Household will review Warrant grants upon a change of sovereignty.

Given that two grantors – The Queen and her husband, Prince Philip – have died in the past two years, the new King Charles III may decide to add more grantors, likely Prince William or The Queen Consort, Camilla. They, in turn, will then be able to designate new Royal Warrant holders.

What can we expect from King Charles III?

At this very early stage in his reign, it is too soon to predict what changes King Charles III would make. However, the Royal Warrant system will likely continue to function the way it does now, given that it benefits businesses and individuals as well as the Royal family. Many existing grantees will probably have their Royal Warrants renewed as they will continue to supply goods and services to members of the Royal Household. Those that received Warrants from The King when he was Prince of Wales can reasonably expect his continued patronage in his new role. 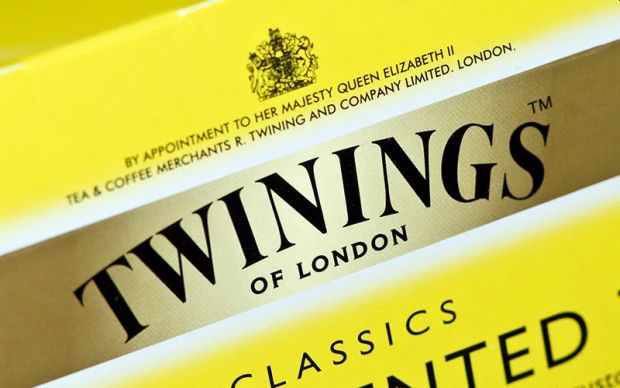 Product lines currently displaying an Appointment to Queen Elizabeth II have up to two years to amend or remove the mark, depending on whether King Charles III issues a new Warrant.

During his time as Prince of Wales, The King was known for supporting environmental and ethical trading. So it will be interesting to see whether more Warrants are granted to sustainable and organic products in the future. This could be an innovative and progressive use of the Royal Warrant – similar to the use of some certification marks, which are considered a form of IP.

On that note, it can be added that King Charles III has some experience in branding, having set up a non-profit company called Duchy Originals Limited to market organic food grown on his estate. The company was most famous for its biscuits but expanded to many other products.

Duchy Originals Limited owns various UK word and figurative trademarks for "Duchy Originals" and "Duchy Organic," dating back to 1992. The brand established a partnership in 2009 with the supermarket Waitrose, which sells food such as vegetables, meat, eggs and cheese under the Waitrose Duchy Organic brand. Some of the profits generated are donated to various charitable causes through The Prince of Wales's Charitable Foundation.

The power of Warrants

In a constitutional monarchy such as the United Kingdom, commentators often talk about the "soft power" that the king or queen wields. Royal Warrants are a good example of that: A long-standing, trusted, but relatively informal system enabling the monarchy to support certain businesses and individuals.

As with other aspects of his reign, the new King will probably continue the system of granting Royal Warrants, but he is also likely to be open to gradual change, for example, in the types of products endorsed and the identity of the grantors. We will find out about the extent of any changes over the next few years.