South Africa: Another Colour Row - The Case Of Mondelez And Nurture Brands

The article deals with the fact that Mondelez is upset because a smallish vegan snack-maker called Nurture Brands is offering a cocoa bar that's called "The Primal Pantry" and sold in lilac/purple coloured packaging. Mondelez sent a cease-and-desist letter to Nurture Brands. 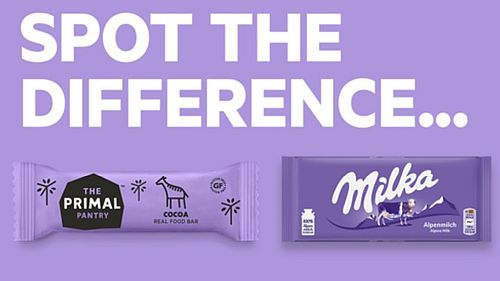 Mondelez's concern is that The Primal Pantry product looks too similar to the Milka product. The Primal Pantry bars were launched in 2016 in a range of colours, although it's not clear from the report when use of the lilac/purple packaging started.

As contests go this one really is a bit of a mismatch. Mondelez is, of course, the multi-national giant that gobbled up Cadbury a few years back, whereas Nurture Brands is a plant-based snacks business that employs some 26 people in its head office in London, with a manufacturing operation in north-east England.

does Mondelez have a case?

Nurture Brands clearly believes not. A company spokesperson is quoted as saying that "Mondelez has not provided evidence that the packaging colour is similar enough to infringe on the Milka trademark".

The spokesperson goes on to say that "we don't think it is the same colour or even in the same spectrum...if they can prove to me the colour is in the range I will work with them but I'm not going to throw away all our products in the EU." The spokesperson makes the point that recalling the products would cost the company between GBP30 000 and 50 000, and that's excluding any fines it might have to pay. The company is seemingly also irked about the way Mondelez has handled the matter: "They've not sought any facts and gone in all guns blazing".

According to the article Mondelez has given Nurture Brands six months to change the packaging, which it seems to me is a generous period. These remarks from the Mondelez spokesperson are also interesting:

"As a matter of practice to protect the values of our brands which we have worked hard to build over hundreds of years, we express our concerns to third parties when we feel they are using a protected brand element...we have opened up conversations with Primal Pantry to try and resolve the matter amicably."

The Mondelez spokesperson said this: "We own a colour trademark in Europe for the distinctive lilac Milka colour for food products".

so what exactly does this mean?

It's well known that Mondelez has had real difficulties securing an EU trade mark registration for the colour in which it chooses to market its chocolate. The company famously lost an appeal which followed protracted litigation involving rival Nestle. In this case, the court said that the trade mark lacked "the required clarity, precision, self-containment, durability and objectivity to qualify for registration".

So when the Mondelez spokesperson says that "we own a colour trademark in Europe" what exactly do they mean? Is the spokesperson simply saying that Mondelez has unregistered / common law rights to a colour, rights that it thinks it can enforce by way of a passing-off case, or perhaps an unlawful competition action?

The issue of colour constituting a trade mark is vexed. We have in a previous article looked at the EU case of Glaxo v Sandoz, where the court held that a trade mark registration described in very specific terms - the "colour dark purple (Pantone Code 2587C) applied to a significant proportion of an inhaler and the colour light purple (Pantone Code 2567C) applied to the remainder of the inhaler" - was held to be invalid, being insufficiently clear, precise and unambiguous.

Yet there are some colour trade mark success stories. In Germany, for example, there was a case involving the bank Santander, where the court held that a trade mark registration for the colour red for banking was valid – in this case a consumer survey proved to be critical, with some 70% of those surveyed agreeing that the colour was an indicator of source or origin.

so how is this likely to end?

We don't think this will end up in court. We do think that some arrangement will be reached. What that arrangement consists of remains to be seen.

If you think that the colour or colour combination you use for your product or service functions as a trade mark, you may wish to explore the possibility of trade mark protection.