The start of 2021 saw Morocco welcome a raft of major developments. Mid-month the third container terminal of the Tangier Med Port became operational with a capacity to handle 1.5 million containers per year, aiming to increase the capacity of the port and strengthen the country's logistics sector. In parallel, the construction of the Agadir Technopark is nearly complete. The project is intended to support entrepreneurship and innovation, creating over 24,000 jobs, and boosting infrastructure development. Morocco is also looking to digitise the tourism space given the decline in visitor numbers over 2020. To minimise the effects of the Covid-19 pandemic, the Moroccan National Tourism Office has created a virtual platform – B2 Marruecos – to attract Spanish tourists and promote the tourism industry in the Spanish market through online workshops. Given the emphasis which Morocco is placing on maritime trade and infrastructure, the country also partnered with the World Bank in late January to launch the Regional Coastal Scheme in promoting the sustainable development of the coastline. 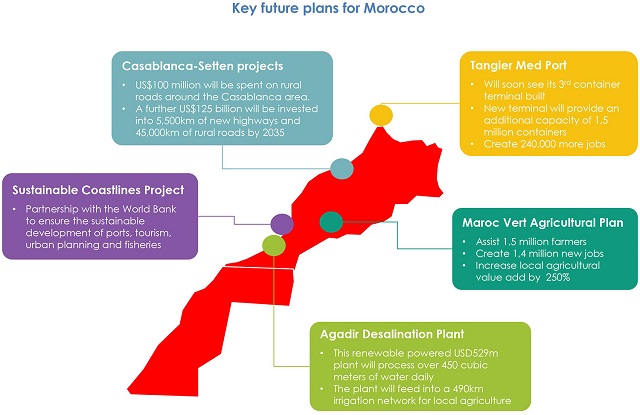 In January, the Egyptian government inked a number of deals with Europe's largest industrial manufacturing company, Siemens AG, to develop its transport and energy infrastructure. As a starting point, Egypt and Siemens have signed an agreement to design, install and commission the country's first ever high-speed rail system, consisting of a 1,000km rail network with a 460km high-speed line to the cost of US$3 billion. The high-speed rail will connect the developing cities of Alamein and Ain Sokhna, transporting freight to foster economic growth. At the same time, an agreement was signed to initiate discussions on the implementation of a project for the production of green hydrogen. The agreement aligns with Morocco's strategy to expand green energy and increase the contribution of renewables as part of the electricity mix.

Several countries in West Africa are moving forward with gas developments as part of energy mix diversification. In Nigeria, Enyo Retail and Supply, a leading downstream energy company, has launched its project to invest in 20 liquefied petroleum gas (LPG) plants. The project will increase the usage of gas while providing a cleaner energy source. The company will also invest in its first autogas filling station, as Nigeria shifts to a gas-driven economy. Concurrently, Globeleq, an independent power generation company, has expanded its power business in Nigeria, by acquiring a 74% stake in CPGNL, a Nigerian power business. Globeleq's vision aligns with the country's agenda to veer away from oil usage and towards cleaner power solutions such as gas. Further west, Ghana too is gearing toward the greater use of gas as part of the energy mix with the arrival of a floating regasification unit. The unit will allow Tema LNG Terminal Company, a liquefied natural gas (LNG) company, to deliver LNG to Ghanaians and increase gas usage as part of the energy mix. 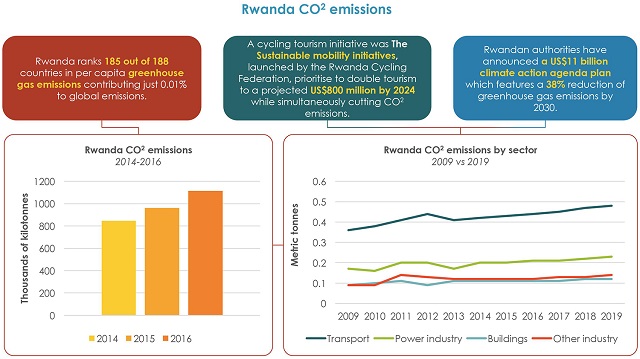 The African tourism sector has seen an uptick in developments this month, as countries seek solutions to the ongoing Covid-19 pandemic. Nigerian start-up Afriktrip launched an online marketplace to provide travellers with a seamless booking process. The marketplace will enable tourists to discover and book tours across Africa offered by both private companies and local tour guides. The island nation of Seychelles has also revealed that it is reviewing its entry requirement procedures in making the country more accessible to tourists in 2021 and beyond. Unvaccinated visitors will have to meet certain conditions to gain entry as the country seeks solutions to reinvigorate its tourism sector. Cooperation between nations is also high with the Rwanda Development Board and Rwanda Chamber of Tourism recently signing an agreement with the Kenyan Association of Travel Agents and the East African Tourism Platform to develop business and leisure travel in the region. 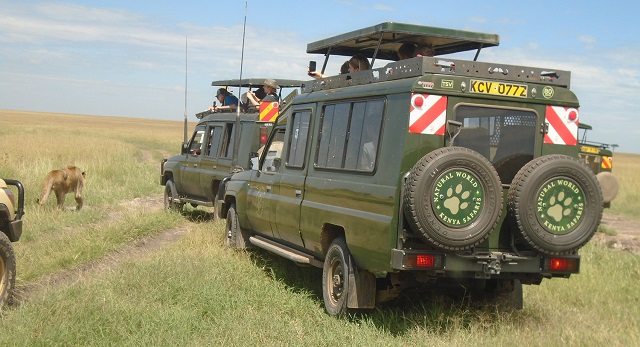 Safari tours in Kenya's Masai Mara. This month Kenya and Rwanda have cooperated to develop business and leisure travel in the region. Image courtesy: NaturalWorldKenya/WikiCommons

Several countries across Africa have looked to promote transitions to cashless economies with the introduction of virtual cards. In Uganda, Airtel, a mobile communications service provider, has partnered with MasterCard to launch a virtual debit card. The virtual card allows Airtel customers to make payments to local and global online merchants that accept MasterCard, increasing convenience within a secure platform. The partnership will drive digital inclusion in the country as customers without a bank account can access the service. In parallel, FNB, a leading South African bank, has launched its virtual card service to all individual and business customers. The virtual card relies on QR Code payments, accessible on the customer's smart device. As a result, customers will have a wider choice of payment methods, increasing convenience and safety while promoting a cashless economy. Meanwhile, cybersecurity multinational Kaspersky has revealed that due to the ongoing pandemic and economic turbulence, Africa is vulnerable to an increase in cybercrime in 2021.

The Kenyan government has recently published the draft Film Bill, which is currently undergoing public review. The proposed bill looks to introduce more guidelines and procedures as the country's film industry has been an area of much debate in terms of licensing and broadcasting. The draft bill details the government's Film Policy and National Film Plan, which includes monitoring the implementation of the plan, while also providing further details on the establishment of National Film Entities, including the Kenya Film Commission, Kenya Film Academy, Kenya Film Classification Board and Kenya Film Fund. The bill is designed to enhance Kenya's film industry by promoting local filmmakers, providing equal opportunity, and creating avenues for growth. Improving infrastructure and training is also feature in the bill, which could catalyse the development of Kenya's film industry not just regionally but internationally and a meaningful contribution to the economy. 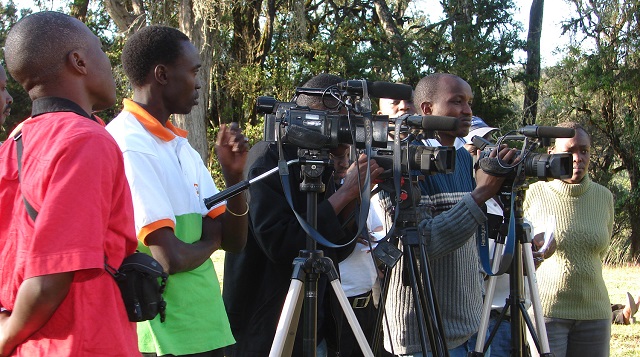 A Kenyan film crew capturing wildlife images. This month the Kenyan government has introduced the draft Film Bill, its aim is to introduce more guidelines and procedures to enhance the country's film industry. Image courtesy: RonaldRobert/WikiCommons

The beginning of 2021 has been fruitful for South Sudan's oil sector, as new agreements and initiatives have been established to ease economic challenges post-pandemic in the region. In mid-January South Sudan and neighbour Sudan signed an agreement to increase oil production in the former's northern oil fields from 170,000 to 300,000 barrels per day within the next three years. The agreement will strengthen bilateral relations. Simultaneously, both countries have agreed to a draft deal to target the development of oil management skills in South Sudan, in which Sudan will offer training services to South Sudanese technical engineers. South Sudan's Ministry of Petroleum has also invited a shortlist of companies to bid for the environmental audit of the country's oil fields as part of a strategy to reduce oil pollution and strengthen environmental enforcement and regulatory oversight.

An innovative device developed in South Africa could be a game-changer for oxygen delivery to Covid-19 patients. Umoya, a South African humanitarian organisation, has joined forces with Gabler Medical, a specialist medical device manufacturer, to establish the Umoya-Gabler consortium, which has developed the Oxygen-Efficient Respiratory Aid (OxERA). This device is portable, cost-efficient and can deliver consistently high levels of oxygen to prevent patient lungs from collapsing. OxERA could make a difference in situations where patients outnumber skilled staff, and there is a lack of intensive care units as well as insufficient bulk oxygen supplies. The device has been approved by the South African Health Products Regulatory Authority and has shown to be successful in both rural clinics and specialist hospitals.

The Coca Cola Foundation has backed the Replenish Africa initiative, a scheme set up to help restore South Africa's struggling catchment areas and aquifers by clearing invasive species. The plan employs youth in economically deprived rural areas in five different locations around the country, including the Mpofu Dam that feeds Nelson Mandela Bay and the Wemmershoek Dam which plays a key part in the wart supply for Cape Town. To date, the initiative has cleared 3,400ha of invasive plants and ensured the additional supply of 1,5 billion litres of water annually. The South African initiative forms part of a broader continental strategy, which has been operating since 2009. Coca Cola's overarching goal in supporting this project is more than simply philanthropic. With a physical presence in nearly every African market, and an absolute dependence on fresh water for its operations, the Coca Cola company and its RAIN Programme has become a key stakeholder in the future of potable water on the continent. 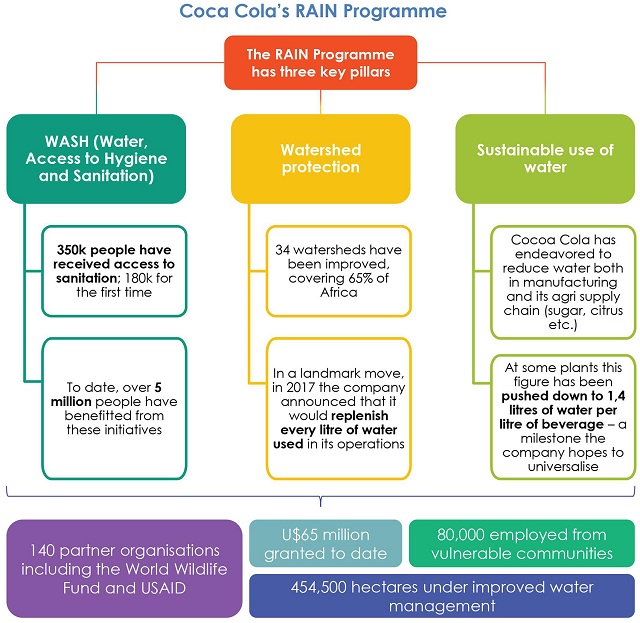 On 11 January, the One Planet Summit for Biodiversity, co-organised by France, the United Nations and the World Bank, was held, introducing several proposals aimed at benefitting Africa's environment, wildlife and agriculture spaces. This included the Great Green Wall (GGW) for the Sahel and Sahara, which received around US$10 billion in new funding to fast-track efforts to restore degrading land, save biological diversity and create green jobs while building the resilience of the population in the region. The GGW is located along the southern margin of the Sahara Desert, stretching from the Atlantic coast to the Red Sea. During the summit, the International Agroecological Movement for Africa (Iam Africa) was also launched. This multilateral coalition between Europe and Africa will focus on the development of the agro-pastoral sectors on the continent, and will also aim to strengthen agricultural cooperation between the continents while maintaining biodiversity.

The start of 2021 has been politically tumultuous for Uganda as the country went to the polls in mid-January. Before voting began, Uganda and Facebook were involved in a tug of war as accounts of government officials were banned, due to 'manipulating public debate'. This resulted in the government shutting down social media and cutting off the internet for the duration of the election. Incumbent Yoweri Museveni was declared the winner with 58.64% of the vote as opposition leader Bobi Wine, who secured 34.83%, disputed the results and was placed under house arrest.

Egypt has reopened its airspace as well as resumed maritime navigation with Qatar. This comes after the 41st Gulf Cooperation Council summit held in Saudi Arabia resulted in the Al-Ula Gulf Declaration. The signatories, which include Egypt, have committed to re-open all sea, land and air ports after three years of severed diplomatic ties with Qatar. In 2018, Bahrain, Egypt, Saudi Arabia and the United Arab Emirates accused Qatar of supporting terrorism and meddling in their internal affairs.

Ethiopia, Sudan and Egypt talks on GERD break down, again

The new year has resulted in more of the same for Grand Ethiopian Renaissance Dam (GERD) negotiations. A new round of talks between Ethiopia, Egypt and Sudan has broken down once again, with Sudan indicating that it has objected to Ethiopia's intentions to fill the reservoir, whether an agreement is reached or not. On the other hand, Ethiopia and Egypt have blamed Sudanese objections to the framework of the talks for the new deadlock.