South Africa: Yes, You Can Have Lime With This

It's been a while since we discussed a ruling of the South African Advertising Regulatory Board ("ARB").

In the ad (click here to watch), two blokes are on a video call (yes obviously they should be in a bar but these are not normal times). They're having one of those deep male conversations.

Bloke One: "Hey where are you?"

Bloke One: "Better be a real one. Remember when you asked for this?" As he says this, Bloke One holds his thumb and forefinger some 5cm apart. Then we see a visual of that earlier time when Bloke Two ordered a beer whilst doing the thumb-and-forefinger-5cm-apart thing, during which he also uttered the apparently controversial words "Can I have a lime with this?" To which an agitated Gerard Butler responded by saying "Hey, that's a Windhoek, that's 100% pure beer you don't need any...lime." Following which a suitably-chastened Bloke Two took a sip of his beer and clearly enjoyed it. To which now-satisfied Gerald Butler responded with a "Keep it real, Joe." 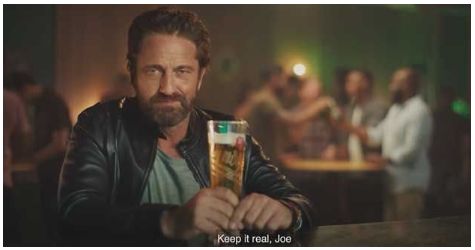 So, in short, we're talking about a TV advert for Windhoek beer that tells you not to add lime to your beer. An advert that features famous actor Gerard Butler (who's seen as quite macho), and, as Bloke Two, a person who's neither famous nor macho, but there will be some more detail on him later. An advert that has that sparkling dialogue you read earlier – all that's missing there is a load of "boets", but it might be that the scriptwriters thought that Butler (who's from Scotland) might have struggled with that little South Africanism.

An individual, Aadila Agjee, filed a complaint with the ARB. She claimed that the advert was offensive and that it belittled people (particularly women) for their personal preferences. She cited various provisions of the Code of Advertising Practice, including Clause 3.5 of Section II (unacceptable advertising – gender).

What Heineken had to say

Heineken argued that the point of the advert was to get the message across that Windhoek is 100% pure. There is, said Heineken, nothing wrong with suggesting that you shouldn't add lime to your Windhoek because the product does not need any flavouring.

There's no offence or shame in the advert because Bloke Two in fact realises that he likes Windhoek without lime. And Gerard Butler is not discriminating against women.

The Directorate saw things very differently. It found that the advert breached Clause 3.5 of section II. What follows is some of its reasoning:

A depiction of a macho world. "The Directorate understands the basis of the Complainant's discomfort. While it is never spelt out there is an undertone of real men drink real beer." This comes from the "masculine interactions and the all-male cast – it is almost impossible to imagine a woman teasing her friend for ordering a lime slice with the beer, or insisting that her friend order real beer." There is "unspoken dialogue" and this is further emphasised by the use of Gerard Butler, an actor associated with macho movie roles; and by the use of the words Keep it real, Joe." This is in contrast with Bloke Two, a "gentle-looking red-headed man – two characteristics that might typically make him a target for teasing in a toxic environment."

A lack of humour. "It is a completely serious communication, the unavoidable out-take of which is that real men drink real beer."

A depiction of a fit-in culture. The Directorate was "disturbed by the 'fit in' culture communicated by the commercial; not only is the character publicly shamed and belittled about his request for a lemon or lime in his beer, but he is also still being teased about it after the fact."

The implicit nature of the message. The advert never says "real men drink real beer", it simply implies it: "The reality is that it is exactly the unspoken nature of the communication that makes it particularly dangerous – the gender stereotype portrayed as so normal that it does not even require explanation."

Toxic masculinity. "It is the entrenchment of the role of men as having to behave in a certain way with which the Directorate takes issue. It is also the entrenchment of male behaviour that is bullying, and what has come to be labelled as 'toxic masculinity'. The advertisement, rather than drawing attention to the purity of the taste of their product, paints a clear picture of an aspect of the target market; and that market is a stereotyped macho male who buckles to the pressure of his peers to fit in."

PC (woke even), or a judgment that reflects the values of 21st century South Africa? You decide.