In 2013, KSA introduced its first levy payable by employers for every foreign employee over and above a 1:1 ratio with Saudi employees. This measure has now been supplemented by a new fee payable by employers and introduced from 1 January 2018, for each foreign employee employed regardless of the ratio of foreign employees to Saudi employees. Together with the dependent levies introduced on 1 July 2017, this new measure is likely to have an impact on the Saudi labour market and employers' operating costs in the Kingdom. This article further explains these new developments.

Since 2013, employers have had to pay a fee of SAR 200 per month (2400 a year) for each foreign employee above a ratio of 1:1 of foreign employee to Saudi employee in the employer's workforce. This fee whilst expressed as a monthly sum was in fact payable in one lump sum for the year at the time a work permit and residency visa were granted (with no reimbursement if the authorisations were cancelled or the relevant ratio went down to 1:1).

In July 2017, fees on individuals sponsoring dependents were introduced as set out in the table below with the fees announced in the January 2017 National Budget and set to increase incrementally for the next three years. These fees are payable by individuals themselves and not employers. However, many individuals will look to employers to support or to cover these fees in order for them to continue being based in the Kingdom. Whether or not an employer does so is entirely at its discretion with some anecdotal evidence pointing towards employers covering these costs for employees based in the Kingdom long term but not for new recruits. 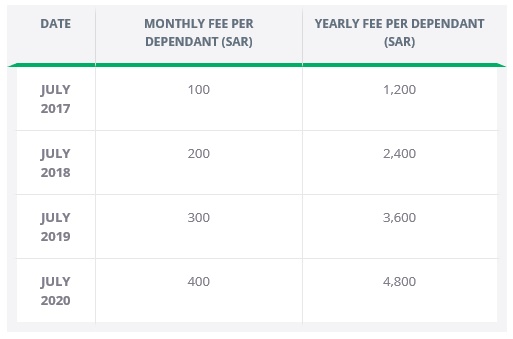 Whilst these fees are expressed as being per month, they are payable in one lump sum and from 1 July 2017 were applied, where residency visas were renewed, requested for first approval and also were exit and reentry permits were applied for and granted. In addition, while these applications may have been made after 1 July 2017, where the period of authorization crossed into an increased fee period (e.g. 1 year residency being granted in August 2017 would go into the increased fee period from July 2018) the higher fee was applied for the relevant period.

On 5 December 2017, the Ministry of Labor and Social Development ("MoL") published a Ministerial Resolution relating to work permit fees and employer fees applicable from 1 January 2018. This resolution introduced a new fee payable by employers for each foreign employee engaged, with these fees set to increase incrementally each year for the next three years by SAR 200 a month. Whilst the fee is payable for each foreign employee, it is increased where the ratio of foreign employee to Saudi employee is above a ratio of 1:1.

This new fee is in addition to the fee introduced in 2013 which remains in place. The table below sets out the new fee and how it will operate over the next three years.

Fees are payable and shall be collected annually upon issuing or renewing work permit and they are calculated on a daily basis.

All work permits issued or renewed prior to this resolution coming into effect will not be subject to the new fees, but on 1 January 2018 a bill will be issued for the period covering 2018 for any existing work permits. This bill will be payable within 3 months and if not paid on time, all of the employer services would be suspended.

In addition, overdue fees for previous year(s) shall be paid in accordance with the rate currently applicable to foreign employees and not as per the rate during the due date in 2018. The Ministerial Resolution also provides that special categories of Saudi employees under the Nitiqat system who typically count as more than one employee e.g disabled GOSI registered employees, released convicts within two years of release, certain categories of students, Saudi owners registered with GOSI, will all be considered as one (1) Saudi employee for the purpose of calculating fees, unlike how they are calculated for the purpose of Saudisation.

All fees shall be paid through commercial banks using the SADAD services.