by Saud Al-Ammari and Scott Burrell
Blake, Cassels & Graydon LLP
Your LinkedIn Connections
with the authors

Welcome to the Gulf Cooperation Council (GCC) Investment Outlook 2014, published by Mergermarket, in conjunction with Dr. Saud Al-Ammari Law Firm in association with Blake, Cassels & Graydon LLP. Many changes have occurred in the global economy since this report was last published in 2010, and the GCC now stands out in the emerging markets category with a robust growth forecast and an abundance of opportunities for foreign and direct investment in the various sectors of the GCC countries, comprised of Bahrain, Kuwait, Saudi Arabia, Oman, the UAE and Qatar.

The report reveals attitudes and opinions of key dealmakers and executives in the Gulf region on vital matters such as regulation, the impact of the opening up of the Tadawul (Saudi Arabia's Stock Exchange) and the reduced dependency on oil & gas.

All of the six economies remain heavily reliant on revenue derived from hydrocarbons, but diversification efforts are increasingly bearing fruit, to varied degrees, across the GCC. Forty-five percent of survey respondents believe that the opening of stock markets to foreign direct investment will be one of the main drivers for regional growth, while 36% consider increased demand for infrastructure funding to result in increased investment activity.

The Gulf nations are seeking to leverage their strengths in areas such as sourcing capital and functioning as a springboard into the growing consumer markets of the Middle East. Vying to present themselves as ideal start-up locations for new businesses and expansion targets for European and Asian retailers, the UAE, Bahrain and Saudi Arabia have made great strides in improving corporate governance while also tackling economic reforms and labour challenges.

Having weathered the global economic downturn, these markets contain growing consumer classes and are equipped with robust legal infrastructure – both of which should entice North American, European and Asian investors looking to start up or expand businesses.

In addition, survey respondents anticipate an increasing number of international joint ventures as well-capitalized publicly listed national companies in sectors such as transportation, telecommunications, and real estate are expected to develop their presence both regionally and internationally. Over the next 12 to 24 months, 73% of respondents expect publicly listed companies to be the most active investors in the GCC region.

Meanwhile, 62% of respondents said that public-private partnerships are best suited to fund large industrial and infrastructure projects as governments are aiming to match capital with foreign expertise and technology. Notably, respondents believe that scheduled mega projects such as Saudi Arabia's US$1.1 trillion projects, under way or planned, or the Dubai Expo 2020 and the FIFA World Cup in Qatar in 2022 will underpin regional growth not only in the infrastructure sector but also in sectors as diverse as real estate and tourism and present plenty of joint venture opportunities. Fifty-one percent of respondents think real estate will be among the top sectors to target for diversification away from hydrocarbon-related industries.

The majority of survey respondents in the GCC region also believe that closer integration between the six countries will be vital to the growth of the region as a whole. Projects, such as the regional high-speed rail link and a new causeway between Bahrain and Saudi Arabia announced in September, are expected to enhance the flow of goods and labour. Additionally, further economic reforms in the individual countries are sure to spark investor interest.

In terms of M&A activity, it is perhaps unsurprising that survey respondents expect most dealmaking over the next 12 to 24 months to take place in the oil & gas sector. However, real estate, financial services, infrastructure and retail sectors also figure highly as dynamic sectors in the M&A market.

Oil & gas revenue still constitutes the majority of GDP in the GCC. But, as governments step up their efforts in their perennial quest to diversify their economies and channel funds to jumpstart other sectors, the rewards are solid growth projections and the promise of foreign direct investment in the region. Developing a competitive advantage in one or more industries remain a serious challenge for every GCC country.

We hope you enjoy this report and the in-depth analysis on the above findings and other specific facets of GCC investment activity, including deal structures, drivers of M&A activity and financing trends. We think you'll find this survey both useful and informative, and as always, we welcome your feedback.

As the six countries of the GCC aim for sustainable growth through the diversification of their still heavily oil-reliant economies, attracting foreign investment remains of key importance. The region's future will also largely depend on the GCC's ability to maximize regional cooperation in the areas of transportation, electricity and oil & gas pipelines, tackling labour challenges and implementing efficient policies to encourage private-sector activity.

At 40%, more than one-third of respondents believe the level of economic integration in the GCC will determine future growth. Expectations are in place for a full customs union in 2015 that would enhance the flow of capital, goods and labour and give the GCC a distinct competitive advantage as a trading block. Closer integration of the Gulf markets will also assist diversification of the economy and support the growth of non-oil industries, which 40% of respondents considered as important as economic integration.

One respondent states that: "Diversification and the growth of nonoil industries will help shape a better economic environment for the GCC region."

GCC's non-oil sectors, specifically the construction and retail-related segments, will continue to buoy economic activity, the International Monetary Fund (IMF) said. Private-sector credit and significant spending on infrastructure are the drivers. On the other hand, the IMF warned that non-oil revenues, in terms of the overall numbers, are still limited and recommended looking at alternate sources including corporate income or value-added taxes. In fact, asset management firm Alkhabeer Capital recently said that the spending on the annual budgets of GCC countries is still mostly derived from revenue that is based on the export of hydrocarbons even though non-hydrocarbon industries' contribution to the region's overall GDP has already risen considerably. For instance, Alkhabeer said Qatar's and the UAE's non-hydrocarbon revenues have reached over 40% of the countries total revenue. This is much higher than Saudi Arabia at 10%. As a comparison, the firm also brought up other resource-rich economies such as Norway where oil-related income comprised roughly 30% of the government's revenues.

Hence, 31% believed that strong global oil prices remain an important factor as it determines government spending, and 27% said domestic economic reform played a vital role for enabling growth. Only 9% saw geopolitical risk as a determining factor — given the tensions in the wider Middle East region, this is a particularly optimistic finding and highlights the growing stability in the GCC.

Respondents estimated a growth rate of between 4% and 9%, with the majority projecting an average of 5% to 6% growth. This is slightly above the IMF's estimate of an average of 4.2% GDP growth for the GCC in 2014. This forecast compares very favourably with a number of other emerging markets. According to data from Bloomberg, the GDP growth figure of 4.2% is higher than powerhouses such as Brazil (2.6%), Mexico (3.7%), Russia (2.5%) and South Africa (3.05%).

In addition to the factors stated above, it is also worth noting the fast-growing and youthful demographic within the region. According to recent research from the Economist Intelligence Unit (EIU), the GCC has one of the fastest-growing populations in the world. It is estimated that by 2020, the population is set to increase by one-third to 53 million people. More than 45% of these will be between 15 to 64 years of age.

At a time when many developed economies are struggling to cope with an aging population, these demographics present serious opportunities for corporates in a variety of sectors, particularly the technology and consumer industries.

Which of the following factors will be most important to determining future economic growth in the Gulf Cooperation Council (GCC)? (Select top two) 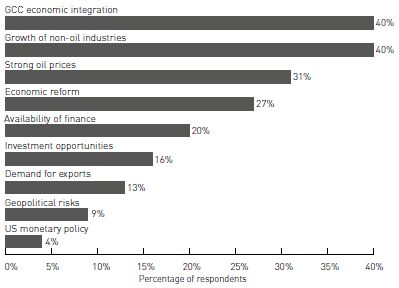 In the GCC region overall, which of the following sectors do you think will see the most rapid future growth? (Select top two) 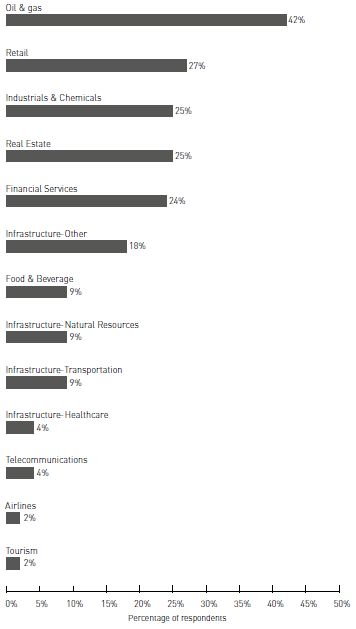 Despite efforts to minimize exposure of the Gulf economies to changing global energy demand patterns and volatile oil prices, 42% of respondents said the oil & gas sector would still see the most rapid future growth. Respondents were also confident about the growth of the retail sector (27%), industrials & chemicals sector (25%) and the real estate (25%) and financial services (24%) sectors.

Diversification efforts over the past decade are starting to bear fruit in some GCC countries, where the total contribution of oil & gas towards the national GDP is slowly making room for rising revenue from non-oil-related industries. For instance, in Kuwait, real non-oil GDP growth is expected to reach 3.9% in 2014 versus 2.7% in 2013, according to an IMF report on GCC economies released in June. This increase was mainly due to government investment in both infrastructure and refineries.

Despite the findings, many respondents in the survey acknowledged that, anecdotally, both the telecom and infrastructure sectors are also seeing rapid growth. One executive stated: "Infrastructure in healthcare is a sector into which the GCC is diversifying to reduce the dependency on oil and natural resources output."

Meanwhile another respondent felt that: "The telecom sector is growing with the entry of telecoms businesses from Europe. And, infrastructure demand is also on the rise, mainly because of the expansion of businesses who feel they have lesser scope in domestic areas."

Foreshadowing the infrastructure boom that is expected to take place before the arrival of the World Expo in 2020 in Dubai and the FIFA World Cup 2022 in Qatar, 18% of respondents said infrastructure will see the most rapid growth. Some respondents also expected preparation for these events to act as a catalyst for other sectors, with growth spilling over into higher demand for labour and materials.

"The industrials & chemicals sector will mainly grow alongside the subsectors of building materials and fixtures, considering the need for new infrastructure. The real estate sector is also expanding with commercial construction as the need for domestic housing increases," one respondent said.

What are the main drivers of investment in the GCC region overall? (Select top two) 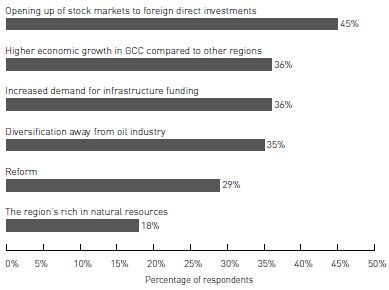 Overall, 36% of respondents think that the increased demand for infrastructure funding will be one of the main drivers for investment in the region. An equal number thinks that higher economic growth in the GCC, compared to other regions where recovery following the downturn is slower to emerge, will be a main catalyst for overall investment in the region.

"The food and beverage and retail industry will grow in the GCC region based on consumer demand, and European firms who are in need of speedy growth will approach GCC countries as there is ease in developing a startup," one respondent commented.

However, the opening up of stock markets to foreign direct investment is rated even higher, with 45% of respondents considering this as the main driver for investment. Here the expectation is that, in 2015, foreign investors will inject fresh cash into the economy by being allowed to participate in Saudi Arabia's Stock Exchange, Tadawul, which is worth approximately US$530 billion.