MSD the patentee and plaintiff was awarded a permanent injunction that forbids CCPC, a Taiwanese company, from manufacturing its generic drug "Ezetity Tablets 10 mg" (hereafter Ezetity) which the court found infringes MSD's patent TW I337083 under the doctrine of equivalents. Ezetity is a generic equivalent to MSD's cholesterol-lowering drug "Ezetrol Tablets 10mg" (hereafter Ezetrol).

The dispute started with a Paragraph IV Declaration CCPC made to the Taiwan FDA in January 2020, asserting that Ezetity pending approval from TFDA does not infringe the two MSD patents listed for Ezetrol and that the patents should be invalid. Apart from the '083 patent, the other patent in dispute is TW I337076, both listed with TFDA's new drug information system soon after the patent linkage system took effect on August 20, 2019. For a snapshot of Taiwan's patent linkage system, please refer to the chart below.

Upon receiving CCPC's Declaration, MSD filed the lawsuit instantly, triggering a 12-month suspension of TFDA's issuance of drug approval of Ezetity. The suspension was scheduled to end on January 13, 2021, less than two weeks from the date the IP Court decision was made.

In this first-instance decision, the judge (Judge Jo-Wei HO) tackled several questions the IP community had been eager to see answered since the inception of the patent linkage system. What follows is an overview of the Judge's holdings.

1. The Judge held that a new drug patentee (or an exclusive licensee) has the right under the Patent Law to file a preemptive lawsuit for permanent injunction based on a duly listed patent against an equivalent generic drug even if the latter has not yet been actually manufactured or sold.

As we commented, the patent linkage system provided in the Pharmaceutical Affairs Act does not clarify the nature and scope of remedies that patentees may seek in litigations filed in response to a Paragraph IV Declaration. After MSD v. CCPC, it becomes clear that the remedies are basically permanent injunctions. The Judge pointed out that even if no actual infringement has taken place, preemptive permanent injunctions are allowable upon a showing of necessity based upon known risks.

In fact, the Taiwan IP Office (TIPO) proposed a Draft Amendment to the Patent Law on January 30, 2020 to set an explicit legal basis for preemptive lawsuits for permanent injunctions in the context of patent linkage system (as well as for declaratory judgments that generic drug companies may file as a counter-attack.) While the amendment bill is still pending in Taiwan's Congress, the pendency is not an actionable ground against MSD's permanent injunction claim, the Judge said, because this claim can be deduced all the same from Article 96.1 of the Patent Law, which says a patentee has the right to "demand a person who is likely to infringe the patent right to prevent such infringement."

2. However, the Judge also held that the scope of such preemptive permanent injunctions is to be limited to forbidding only the "manufacture" of generic drug, unless there is proof that risks to justify a broader scope have emerged.

According to Taiwan's patent linkage system, only when the court renders a final and non-appealable judgment in favor of the plaintiff within the 12-month stay period will issuance of the generic drug approval be further deferred (until after the patent for the new drug expires.) It is simply impossible for a seriously litigated patent lawsuit to go through all three court levels in just 12 months.

Time is not on the patentee's side for another reason. As the Judge rightly indicated, the TFDA's examination of the generic drug approval request is not stopped in the 12-month period, neither are the other relevant administrative proceedings. As such, soon after the 12-month period ends, the generic drug company will be entitled to a TFDA approval for manufacturing and selling the drug.

3. The Judge also held that the preemptive permanent injunction is instantly enforceable upon MSD's placing a bond of NT$500,000 (approximately US$19,000), and CCPC may prevent the enforcement by placing a counter bond of three times the value of the enforcement bond.

It seems the amount of the bonds was decided by the Judge exercising her discretion; whether the parties had had a chance to argue on the bond amount issue is not clear.

4. The instruction for use (IFU) of Ezetity accepted by the TFDA played an important role in this patent linkage lawsuit.

As no sample of the disputed generic drug was available to MSD (despite an evidence preservation order), the Judge allowed the infringement analysis to be conducted based on the IFU of Ezetity, especially the part about the indication for Ezetity. This practice seems to have a good chance to become a norm in patent linkage lawsuits.

Taking this approach, the Judge held that Ezetity does not infringe the '076 patent which claims certain compounds for the treatment of sitosterolemia. Because Ezetity, per the IFU accepted by the TFDA, is for the treatment of hypercholesterolemia, which the Judge deemed to be a different illness from sitosterolemia, despite MSD's allegation that such an omission in the drug description is simply a way to circumvent infringement.

No public comment from CCPC on this decision is available yet. Nevertheless, even if CCPC opts not to appeal, it will not lose much. Chances are that this patent dispute will be solved by itself even before an appellate decision is rendered, to say nothing of a Supreme Court decision, because the two MSD patents will both expire on January 24, 2022. 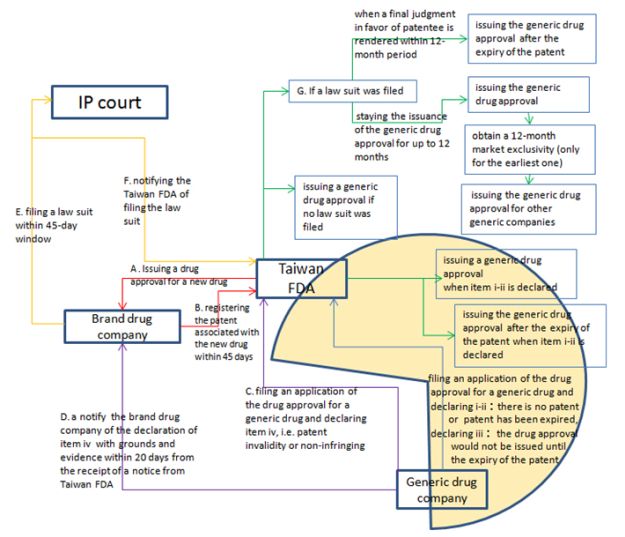 ARTICLE TAGS
Taiwan Intellectual Property Patent
POPULAR ARTICLES ON: Intellectual Property from Taiwan
Patent Law in India
Anand & Anand
The Patents Act 1970, along with the Patents Rules 1972, came into force on 20th April 1972, replacing the Indian Patents and Designs Act 1911. The Patents Act was largely based on the recommendations of the Ayyangar Committee Report headed by Justice N. Rajagopala Ayyangar. One of the recommendations was the allowance of only process patents with regard to inventions relating to drugs, medicines, food and chemicals.
Compulsory Licensing In India
Khurana and Khurana
WIPO defines patent as an exclusive right granted for an invention, which is a product or a process that provides, in general, a new way of doing something, or offers a new technical solution to a problem
All You Need To Know About "Well-Known Trademarks"
Khurana and Khurana
With coming up of the new Trade Mark Rules 2017, a new procedure has been created that allows the Registrar to proclaim a particular trademark as "well known".
Concept Of Fair Use And Fair Dealing In Copyright
Singh & Associates
Fair use supports "socially laudable purposes," typically, if not exclusively, involving the use of the copyrighted work by a second author
Patents Law In India - Everything You Must Know
Vaish Associates Advocates
The presentPatents Act, 1970 came into force in the year 1972, amending and consolidating the existing law relating to Patents in India
A Study On: Novartis AG v. Union Of India
Khurana and Khurana
Intellectual property is an intangible form of property while a ‘Patent' is a subset of intellectual property.
FREE News Alerts
Sign Up for our free News Alerts - All the latest articles on your chosen topics condensed into a free bi-weekly email.
Register For News Alerts
Article Tags
Taiwan Intellectual Property Patent
Related Articles
Trademarks Comparative Guide Saint Island International Patent & Law Offices
Is Non-Profit Use Non-Trademark Use? Saint Island International Patent & Law Offices
Sanyu's Paintings Provide A Window Into Taiwan's Civil Lawsuits Saint Island International Patent & Law Offices
国際消尽適用に関する台湾裁判所の判例と傾向 Saint Island International Patent & Law Offices
Taiwan IP Court's Recent Decision On Patent Exhaustion And "Water Goods" Saint Island International Patent & Law Offices
Mondaq Webinars
Future Series: The Future of Employment Law in Canada - Current Trends and Predictions
CCPartners
Webinar Ontario Canada
How Executives Can Enhance Their IP Strategy and Performance in Switzerland
Swiss Business Hub UK + Ireland c/o Embassy of Switzerland
Webinar London UK
More Webinars
Comparative Guides
Cybersecurity
Data Privacy
Patents
Trademarks
Virtual Currencies
More Guides
Mondaq Advice Centres
Global
Trademarks in SAARC Countries
Global
Investment Immigration
More MACs
Upcoming Events
Mondaq Social Media