A bill of tax amendments submitted by the Executive Branch and approved by the Mexican Congress included changes to Article 5-I of the Value Added Tax Law (VAT Law), regarding the creditable VAT of fixed assets or expenses incurred in preoperative periods (i.e. before generating VAT income on its activities).

Under Article 5-I as it now applies, taxpayers may credit VAT paid on the purchase of fixed assets and/or on expenses incurred in a preoperative period.

Prior to the amendment, which will have effect from January 1 2017, taxpayers were allowed to request the refund of monthly favourable balances of VAT and, in general terms, in a 40-day period the taxpayer would receive the VAT refund. However, the government said this VAT crediting system was making it difficult for tax authorities to verify that fixed assets and/or expenses incurred in a preoperative period would eventually give rise to activities subject to VAT.

Under the changes made to the VAT Law, and according to the explanatory memorandum accompanying the legislation, if the taxpayer's activities do not result in a VAT, then the credit against the tax will be disallowed, and therefore the economic burden of the tax will be borne by the taxpayer as the final consumer.

From January 1 2017, the VAT associated with the purchase of fixed assets and preoperative expenses may be credited under one of the following two options:

It is important to mention that the provision defines the term "preoperative period" as the period of time in which the expenses and purchase of fixed assets are incurred, prior to the beginning of any activities by the taxpayer involving the sale of the goods, provision of services or leasing of the goods.

The VAT Law also defines that the preoperative period may have a maximum duration of one year from the date of the first VAT refund request, unless the taxpayer proves that its preoperative period will extend over a longer duration according to its business model. The tax administration must approve this plan.

However, there is no certainty for the taxpayer that the tax authorities will approve the extension to the preoperative period because there are no specific guidelines for such purposes. As a consequence, this could result in the extension being refused and the refunds being denied.

This amendment will generate a financial cost for investors because the VAT credit will only be allowed until the taxpayer:

For purposes of quantitatively illustrating the financial cost of the bill in the event that the tax authorities deny the request of the taxpayer for an extension, below is a comparison between the costs of a hypothetical investment under the current provisions and the financial costs considering the provisions in force from January 1 2017. The hypothetical investment has the following characteristics:

Table 1 illustrates the cash flow projection, taking into consideration the VAT crediting mechanism in force during the preoperative period, before the VAT changes apply.

As it may be observed in the chart above, the VAT credit is applied on an annual basis on years -3, -2 and -1, which is in the preoperative years of the project, while the resulting internal rate of return (IRR) is 8.3%.

On the other hand, Table 2 shows the cash flow projection under the VAT crediting scheme that will enter into force from 2017. This chart considers a denial of an extended preoperative period.

As it may be observed, the VAT credit is applied on the last year of the preoperative period and the resulting IRR is 7.8%, which is 0.50% lower than the IRR obtained under the VAT crediting scheme in force until the end of 2016.

From a financial standpoint, the fact that a positive inflow is delayed will reduce the profitability of the project as a whole, provided all other things remain equal. However, the actual reduction in the profitability will depend on the characteristics of each project.

The reduction in the profitability of the project, as described above, only derives from the change of the VAT crediting system. It does not consider any other possible impacts, such as the reduction of the cash flows of a project resulting from a higher financing cost.

In this sense, it is important to analyse the financing cost that the amendment of the VAT provisions implies. For such purposes, a hypothetical loan is considered for the project with the following characteristics:

Table 3 illustrates the amortisation of the abovementioned loan.

As it may be observed, the total interest expense in the six-year period is $227 and the annual payment is $205.

In comparison, Table 4 illustrates the amortisation of the loan, taking into consideration a 16% increase in the principal amount in order to finance VAT during all the preoperative periods of the project. An additional payment in year -1 is considered, once VAT from the preoperative period is recovered. The annual payment is recalculated to account for the additional payment.

As it may be observed, the total interest expense in the six-year period is $243, which represents an increase of 6.9% of the total interest expense on the original loan. Moreover, the annual payment in the preoperative period is increased by $32, which represents a 16% increase from the original amount. This increase will certainly have a negative impact on the cash flows of the project, reducing its profitability.

Moreover, the significant increase in the annual payment may complicate the conditions for the creditworthiness of the investor so that the latter may obtain the loan necessary to start the project and may lead the investor to search for better financial conditions in other countries.

Once we have analysed two key indicators of the profitability of a project, it is important to review certain comparative indicators for an investment project in Mexico.

In addition, the graphic below shows the behaviour of the exchange rate (Mexican peso v. US dollar) during the 2005-2015 period. 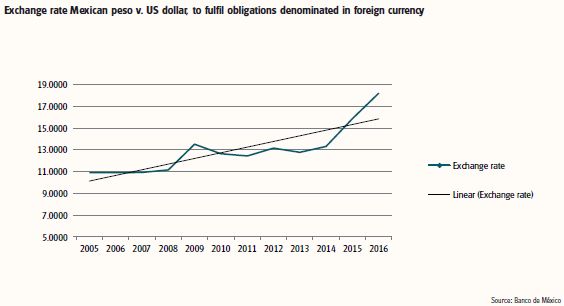 These indicators show that in general terms, Mexico is a country with comparatively high financial and tax costs, as well as a higher than expected increases in prices.

The fact that the financial costs are increased as a result of the changes to the VAT rules means Mexico has not helped its position as an attractive jurisdiction for investment.

Finally, it is important to note that in the explanatory memorandum of the 2013 tax bill, the VAT has favourable effects on investments, savings and employment and consequently on the economic growth of the country. This is because VAT does not tax the investment because it allows the credit on the VAT paid in the acquisition of fixed assets even in a preoperative period, avoiding an increase in the cost of capital and without establishing a limit for preoperative periods.

The modifications of the VAT provisions from January 1 2017 may significantly damage investment into Mexico by increasing the financial costs of an investment project, thus potentially decreasing both the domestic investment and the foreign investment.