On 6 March 2017, in New York, delegations of both countries signed, before the United Nations' Secretary-General and Portugal's former Prime-Minister, António Guterres1, the "Treaty Between the Democratic Republic of Timor-Leste and Australia Establishing Their Maritime Boundaries in the Timor Sea."

The new maritime boundaries between the two countries represent, after almost 50 years, Australian's renounce to the geological criterion for the definition of the extension of continental shelves based on the natural prolongation of the landmass2 and follows the principle of delimitation by mutual agreement and in accordance with equitable principles, particularly, the delimitation is made by the application of the median line, roughly the southern boundary of the current Joint Petroleum Development Area (JPDA).

The dispute now hadended commenced in 1972 with the rejection by Portugal, then the colonial power over Timor-Leste, of Australian claim following the agreement reached between the latter and Indonesia in the "Seabed Boundary Treaty" thus originating, with the establishment of the maritime border between Indonesia and Australia close to the "Timor Through", a gap, the "Timor Gap", between points A16 and A17 (in the map below TA-1 and TA-13), where the overseas Portuguese territory of Timor and, afterwards, the territory of Timor- Leste, stands.

The new maritime boundary (illustrated here) is aligned with Timor-Leste's longtime public claims and a welcome outcome of the Compulsory Conciliation process initiated by the small half-island State against Australia in April 2016 under Section 2 of Annex V of the United Nations' Convention on the Law of the Sea. 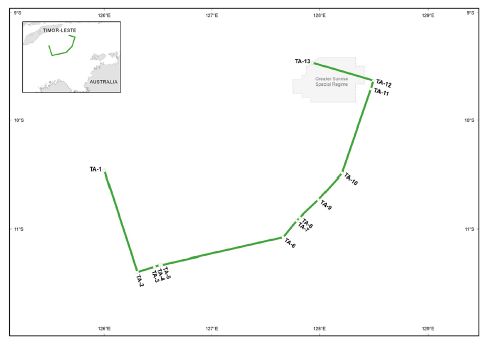 The Treaty establishes in its article 7 (as set out in Annex B) a special regime for the Greater Sunrise oil fields, instituting a "Special Regime Area" in which the Parties shall jointly exercise their rights as coastal States pursuant to Article 77 of the United Nations Convention on the Law of the Sea. This Special Regime will cease to be in force following the commercial depletion of the Greater Sunrise Fields.

The following is the depiction of the outline of the Special Regime Area and the Greater Sunrise Fields, used in the Treaty (for illustrative purposes only): 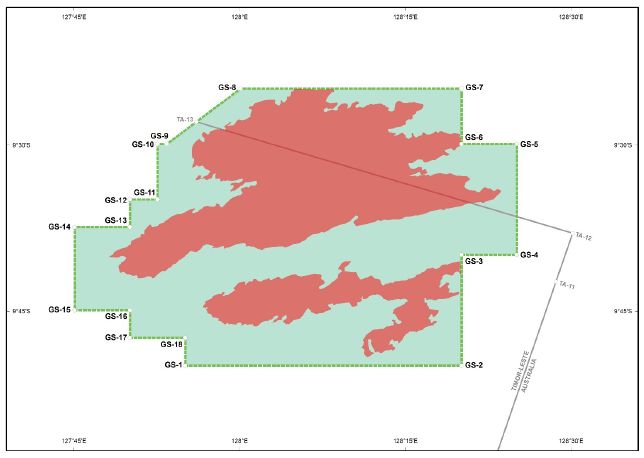 Article 2 of Annex B (Greater Sunrise Special Regime) lays down an upstream revenue share system (revenue derived directly from the upstream exploitation of Petroleum produced in the Greater Sunrise Fields), as follows:

To be noted that the development of the Greater Sunrise Fields by means of a pipeline to Timor-Leste is a longtime aspiration of the Timorese authorities and deemed very important for the viability of the ambitious Tasi Mane project3, outlined in the Timor-Leste Strategic Development Plan 2011-2030 and in which billions of dollars were already spent. Despite the Timorese Government previous position that it "(...) will only approve the field development of Greater Sunrise if its gas is piped to Timor-Leste onshore and an LNG plant is developed in Beaço."4 5, the Treaty subjects (Article 9 of Annex B) the production of petroleum from the Greater Sunrise Fields to a Development Plan in accordance with the Development Concept approved by the Governments in the two countries, to be submitted by the Contractor to both the Designated Authority and the Governance Board, and to be approved by the latter.

However, the Condensed Comparative Analysis of Alternative Development Concepts (attached to the Treaty), concludes that for the Timor Gap's concept (i.e. a pipeline to Timor-Leste's south coast) to "achieve an acceptable rate of return on the downstream project without exceeding the tolling fee that the upstream concept could actually bear.", a direct subsidy of the project's capital expenditure of an estimated 5,6 billion USD, or, roughly 1/3 of Timor-Leste Petroleum Fund would be required. Thus, the option for the pipeline to Timor-Leste appears to be a remote one.

With the implementation of the new Special Regime, the current applicable twofold regulatory framework will be harmonized and replaced by a single Special Regime framework, namely the existing titles (PSC's JPDA 03-19 and JPDA 03-20 and Retention Leases NT/RL2 and NT/RL4) will be converted into one single PSC – the Greater Sunrise Production Sharing Contract.

The Treaty establishes a two-tiered regulatory structure (Article 5) for the regulation and administration of the Greater Sunrise Special Regime, consisting of a Designated Authority responsible for carrying out the day-to-day regulation and management of Petroleum Activities in the Special Regime Area. Pursuant to Article 6(2)(a) of the Treaty, the Designated Authority is the Timor-Leste National Authority for Petroleum and Mineral Resources, or "ANPM". This Authority acts on behalf of Timor-Leste and Australia and reports to the Governance Board (Article 7). The Governance Board is composed by three members, being two appointed by Timor-Leste and one by Australia.

The other petroleum fields within the JPDA or in the Australian exclusive zone (prior to the Treaty) - Bayu-Undan, Kitan and Kitan relinquished areas and the Buffalo – are subject to transitional provisions laid down in Annex D to the Treaty.

This transitional regime (Article 1 of Annex D) establishes that the Petroleum Activities entered into under the terms of the – now revoked – Timor Sea Treaty and the International Unitisation Agreement, shall continue under conditions or terms equivalent to those currently in force, with the necessary adjustments resulting from the fact that such fields will now be deemed us being situated on the continental shelf of Timor-Leste, with the exception of the Buffalo oilfield that will be subject to a new PSC to be negotiated and executed between Timor-Leste and the Contractor (such PSC, shall reflect in conditions equivalent to those in place, as determined by agreement between the parties, the security of the title and any other rights held by the titleholder).

Notwithstanding the fact that the Treaty has not addressed all matters under discussin between the two countries (notably there's no final decision on the Timor south coast pipeline and no comprehensive framework on local content was put in place) it is, nonetheless, a remarkable developed and achievement for Timorese diplomacy and it ends a half-century dispute over the Timor – Australia maritime borders.

Pursuant to the execution of the internal ratification procedures (in the case of Timor-Leste, due to the current political gridlock, ratification shall not take place before the next Parliamentary Elections scheduled for 12 May this year), it is broadly expected the opening for the first time since 2006, by Timor-Leste, of new areas, previously covered by the JPDA and/or Australian jurisdiction, for oil and gas exploration.

For the same political reasons, we would expect that the whole process is not launched before there is a clear outcome of next May elections, with a newly elected Parliament and new Government.

Ultimately this means, in our opinion, that the more optimistic scenario is that the possible award of such new areas will never take place before 2019.

Taking into account that some of those areas have proven significant potential, such opening, in addition to the new stability achieved by the two countries in terms of political and diplomatic relations and the establishment of a stable framework applicable to the oil and gas offshore exploration, and production appear to be conducive to a new era in the oil and gas industry in the Timor Sea that will, hopefully, bring new opportunities of growth and development to the small Southeast Asia country.

1 As Portugal's Prime-Minister, Guterres campaigned for United Nations' intervention in Timor-Leste in 1999, after the then Portuguese Colony voted for its independence in August of that year.

2 On this topic, amongst others, Francisco Pereira Coutinho and Francisco Briosa e Gala, David and Goliath Revisited: a power tale on the agreements between Timor-Leste and Australia over the Timor Sea, p. 5.

4 This quotation can be found in Timor Gap's website at https://www.timorgap.com/databases/website.nsf/vwAll/FAQs.