In August 2008, the Bunga Melati Dua,1 a vessel owned by MISC,2 was on a voyage from Malaysia to Rotterdam carrying a cargo of biodiesel when it was hijacked by pirates in the Gulf of Aden. The ship and its crew were taken into Somali waters. The vessel was released less than six weeks after her capture on payment of USD2 million in ransom. The value of the vessel and her cargo amounted to USD80 million. It was common ground between the cargo owners and their insurers that the theft of the cargo and seizure by the pirates were insured risks. Some 11 days before the release of the vessel, the cargo owners issued a notice of abandonment, claiming actual total loss or constructive total loss of the cargo. The owners contended that, on the capture of the vessel by the pirates and its removal into Somali waters, the cargo became an actual total loss within the meaning of s 57(1) of the Marine Insurance Act 1906. The High Court of England held that there was no actual total loss.

On appeal, the cargo owners argued that:

(a) the capture by the pirates created an immediate actual total loss, whatever the prospects of recovery might have been, since the law would or could not take into account the payment of a ransom as a legitimate reason for calculating the possibilities of recovery; and

(b) that although payment of a ransom was not illegal, it was so undesirable from the point of view of public interest and universal principles of morality that it could be no part of an insured's duty to preserve his property from loss by succumbing to a ransom demand.

The insurer contended that:

(a) the statutory test for an actual total loss was that the insured should be "irretrievably deprived" of their property and, on the authorities, that would connote a physical or legal impossibility of recovery; and

(b) the cargo could not be said to be irretrievably lost when there was a good chance of negotiations for payment of ransom, which was neither illegal nor against public policy, being fruitful.

The Court of Appeal held that it could not be against public policy to pay a ransom to save property and the liberty or life of hostages, and observed that as long as there remained no practical alternative for shipowners and their insurers, the practice of paying ransoms would continue. The court also referred to an earlier decision,3 which suggested that a ransom paid could be recovered as sue and labour expenses in certain circumstances and that, therefore, the payment of a ransom could not be considered illegal.

The court made it clear that its judgment should not be construed as applicable in a case of an act of terrorism.

The principles established in the Bunga Melati Dua are likely to be adopted by the Malaysian courts. Although under Malaysian law, payment of a ransom is illegal under legislation relating to kidnapping,4 the provision did not extend to an extortion of a "private ship"5. It remains an open question whether a ship detained in an act of terrorism would render a demand for ransom in those circumstances illegal. Legislation relating to terrorism financing6 in Malaysia renders the payment of a ransom illegal and a criminal offence.

In January 2009, the chemical carrier Longchamp was forcibly taken over by Somali pirates in the Gulf of Aden. The pirates demanded a ransom of USD6 million. Following negotiations over 50 days, a ransom of USD1.85 million was paid by the owner. It was common ground between the shipowner and the cargo owners that the ransom paid was expenditure allowed in general average. However, cargo owners disputed the general average claim for other expenditure incurred during the negotiations that the shipowner sought to claim under Rule A and Rule F of the York-Antwerp Rules 1974. These expenditures included bunkers, crew wages and maintenance, media response services and telephone charges, totalling USD181,604.25.

There is a general average act when, and only when, any extraordinary sacrifice or expenditure is intentionally and reasonably made or incurred for the common safety for the purpose of preserving from peril the property involved in a common maritime adventure.

"In these morally muddied waters, there is no universally recognised principle of morality, no clearly identified public policy, no substantially incontestable public interest, which could lead the courts, as matters stand at present, to state that the payment of ransom should be regarded as a matter which stands beyond the pale, without any legitimate recognition. There are only elements of conflicting public interests, which push and pull in different directions, and have yet to be resolved in any legal enactments or international consensus as to a solution, save that of wary watchfulness, the deployment of naval resources as a form of law enforcement or policing operation, and a regard for a comprehensive approach, seeking to address political, economic and security aspects of the crisis in a holistic way."

The cargo owners argued that the disputed expenses should not be allowed as substituted expenses under Rule F as it only applied if the costs and expenses that would have been incurred would have been allowable as general average, which ought to be "reasonably ... incurred" within the meaning of Rule A. It was argued by the cargo owners that if the shipowners had paid the pirates' initial ransom demand of USD6 million without attempting to negotiate, the sum of USD6 million would not have been reasonably incurred.

The shipowners contended that the question of reasonableness had to be assessed on the hypothetical assumption that the alternative course, to negotiate the amount down, was not an available option.

The court agreed that the initial ransom demanded of USD6 million must be found to be reasonable under Rule A before substituted expenses under Rule F will be allowed in general average. However, the judge held that it was not possible to conclude that a ransom payment of USD6 million would not have been "reasonably... incurred" within the meaning of Rule F.

It was therefore held that the disputed expenses as are reasonably incurred during the hijack period in order to reduce the ransom would amount to substituted expenses and allowed as general average under Rule F.

The Longchamp is being appealed. 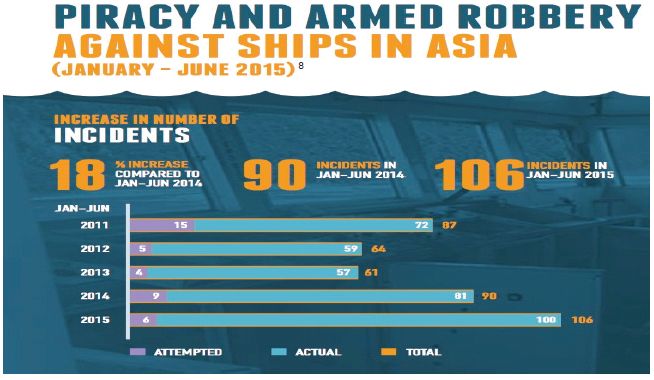 6 Sections 383 to 389 of the Penal Code and ss 2(1), 3 and Schedule 2 of the Anti-Money Laundering, Anti-Terrorism Financing and Proceeds of Unlawful Activities Act 2001

8 Extract obtained from the website of piracy watchdog ReCAAP:

ARTICLE TAGS
Malaysia Insurance Insurance Laws and Products Transport Marine/ Shipping
POPULAR ARTICLES ON: Transport from Malaysia
Drone Law & Policy Developments In India – Welcoming Drones In 2020
Nishith Desai Associates
Year 2019 kept a majority of stakeholders in the Indian drone ecosystem busy with the task of achieving new technical standards to become compliant with the regulatory framework for drone
Ship Arrests And Indian Maritime Law
STA Law Firm
India has a long-standing history in dealing with the sea and has had a distinguished tradition for several years with trade and commerce, both within the region and beyond its territorial borders.
Shipping Law Insights: Legal and market updates from our maritime lawyers around the world
Norton Rose Fulbright Australia
Shipping Law Insights provides commentary, addressing key client questions and topics of interest, to help manage risk.
Specific Operating Procedures On Exit Strategy For Airports, Airlines And Passengers For Commencement Of Domestic Flight Operations
IndusLaw
On March 24th, 20201, the Government of India initiated a nationwide lockdown for a period of 21 (twentyone) days, limiting movement of the general public as a preventive measure to contain the spread of COVID-19 pandemic in India.
The Drone Policy 2018
Khurana and Khurana
The Directorate General of Civil Aviation (the "DGCA") released the much awaited National Drone Policy, 2018 version 1 (Drone Policy) ...
Staying Aflight In The Time Of COVID-19
SKRINE
Air travel has been one of the hardest-hit industries in the time of the COVID-19 pandemic.
FREE News Alerts
Sign Up for our free News Alerts - All the latest articles on your chosen topics condensed into a free bi-weekly email.
Register For News Alerts
Article Tags
Malaysia Insurance Insurance Laws and Products Transport Marine/ Shipping
Related Articles
Staying Aflight In The Time Of COVID-19 SKRINE
MAVCOM Imposes Significant Financial Penalties On AirAsia, AirAsia X And Malaysia Airports (Sepang) SKRINE
The Cape Town Convention And Aircraft Protocol SKRINE
The Merchant Shipping (Amendment) Act 2017: A Sea Change? SKRINE
Selection Process On Track For Malaysia-Singapore High-Speed Rail Project Jones Day
Mondaq Advice Centres
Global
Investment Immigration
Global
Trademarks in SAARC Countries
More MACs
Upcoming Events
Mondaq Social Media