by Vijay Sirohiwal (Gurgaon) and Rahul Pandey (Gurgaon)
S&A Law Offices
Your LinkedIn Connections
with the authors
To print this article, all you need is to be registered or login on Mondaq.com.

The conception of Class Action Suits is one of the many improvement introduced in the Companies Act, 2013 vide Section 245. The concept of Class Action is not new but in Indian context it has found recognition and enforceability now only by means of Companies Act, 2013. The class action suit first time came to the highlight in the context of securities market was when the Satyam scam broke out in year of 2009. Subsequently, the Indian investors in India couldn't take any legal remedy against the company while their counterparts in USA filed class action suit claiming compensations from the company. This mechanism evolved to overcome the well known `Collective Action' problem, where suits by smaller stakeholders are not cost effective, and so may never get filed. As such, this is applicable not just in corporate law, but across the board.

It gained its momentum with "India's Enron"- Satyam Fiasco case: where lakhs of shareholders of Satyam Computer Services (now Mahindra Satyam) came together and sued the company. The shareholders claimed damages worth Rs.5000 Crore but India had no law enabling class action lawsuits (where a large group collectively¬ brings a claim to court and/or in which a class of defendants is sued). The shareholders went from the National Consumer Disputes Redressal Commission to the Supreme Court, and had their claims rejected. But the US Investors who owned American Depositary Receipts (ADRs) demand a settlement to the tune of USD 125m (about 700 Crore) by mounting a class action suit. Shareholders of Satyam were able to claim $125 million (about Rs 700 Crore) from the company.

WHO CAN FILE CLASS ACTION SUITS?

a) In case of a company having share capital, member or members:

b) In case of a company not having a share capital, member or members:

WHO MAY BE SUED THROUGH CLASS ACTION SUITS?

A class action suit may be filed against the following Authorities

WHICH RELIEFS MAY BE CLAIMED THROUGH CLASS ACTION SUITS?

Any member or depositor on behalf of such members or depositors may file a class action suit before the National Company Law Tribunal (NCLT) to:

(a) To restrain the company from committing an act which is ultra vires the articles or memorandum of the company;

(b) To restrain the company from committing breach of any provision of the company's memorandum or articles;

(c) To declare a resolution altering the memorandum or articles of the company as void if the resolution was passed by suppression of material facts or obtained by mis-statement to the members or depositors;

(d) To restrain the company and its directors from acting on such resolution;

(e) To restrain the company from doing an act which is contrary to the provisions of this Act or any other law for the time being in force;

(f) To restrain the company from taking action contrary to any resolution passed by the members;

(ii) The auditor including audit firm of the company for any improper or misleading statement of particulars made in his audit report or for any fraudulent, unlawful or wrongful act or conduct; or

(iii) Any expert or advisor or consultant or any other person for any incorrect or misleading statement made to the company or for any fraudulent, unlawful or wrongful act or conduct or any likely act or conduct on his part;

WHAT ACTION WILL BE TAKEN BY NCLT ON A CLASS ACTION SUIT APPLICATION?

1. On receipt of a class action suit application, the Tribunal will look into the following before admitting it:

2. If an application filed under sub-section (1) is admitted, then the Tribunal shall have regard to the following, namely:—

(a). Issue Public notice shall be served on admission of the application to all the members or depositors of the class in such manner as may be prescribed;

(b) All similar applications prevalent in any jurisdiction should be consolidated into a single application and the class members or depositors should be allowed to choose the lead applicant and in the event the members or depositors of the class are unable to come to a consensus, the Tribunal shall have the power to appoint a lead applicant, who shall be in charge of the proceedings from the applicant's side;

(c) Consolidate all similar applications prevalent in any jurisdiction into a single application and the class members or depositors shall be allowed to choose the lead applicant and in the event the members or depositors of the class are unable to come to a consensus, the Tribunal shall have the power to appoint a lead applicant, who shall be in charge of the proceedings from the applicant's side

PENALTY FOR NON-COMPLIANCE OF ORDER PASSED BY TRIBUNAL

Under Section 425 of the Companies Act, 2013 the Tribunal has also been conferred the same jurisdiction, powers and authority in respect of contempt of its orders as conferred on High Court under the Contempt of Courts Act, 1971.

The cost or expenses connected with the publication of the public notice shall be borne by the applicant and shall be defrayed by the company or any other person responsible for any oppressive act.

Any order passed by the Tribunal shall be binding on the company and all its members, depositors and auditor including audit firm or expert or consultant or advisor or any other person associated with the company.

Provisions relating to class action suits do not apply to a banking company.

Difference between application for prevention of oppression and mismanagement u/s 241 to 244 and Class Action Suits under Section 245 of Companies Act, 2013. 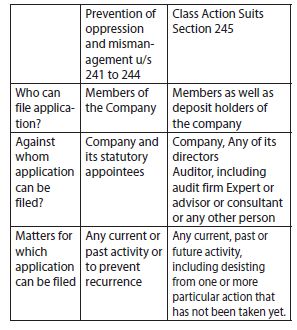 It may be concluded that class action suits will be a beneficial platform for members and depositors to raise their grievances against the management of a company including directors, advisors, consultants, auditors etc for acts or omission that is prejudicial, unlawful or wrongful to the interest of the company. Class action suits may be undertaken as a redressal tool by minority shareholders having common interest for promotion of transparent corporate governance.