India: Bombay High Court Holds That Each Component Of Design Need Not Be Tested For Originality And Novelty

by Vikrant Rana and Sanjeeta Das
S.S. Rana & Co. Advocates
Your LinkedIn Connections
with the authors

The Plaintiffs created a plastic bottle named PURO in May 2016. It got the bottle registered with the Indian Design Office on August 23, 2016, the corresponding registration number being 283345.

The Plaintiffs marketed the bottle in a two-toned color and the packaging it used had words like BPA Free, Insulated Water Bottle, Break Free, Leak Proof etc.

The Defendants launched a similar two-toned bottle in January 2017, which it called KUDOZ in the market with similar type of packaging containing the same words.

The Plaintiffs came to know about the Defendants bottle KUDOZ in the third week of January 2017 and filed a suit for infringement against them.

The Defendants claimed that the design used by Cello for their bottle PURO was a mere way of cobbling together several pre-existing known designs, or mere mosaicking. 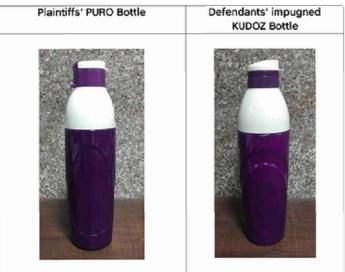 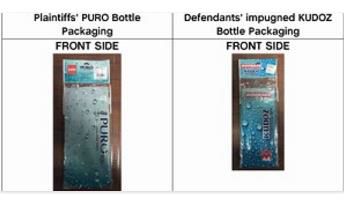 The Plaintiffs submitted that their bottle PURO was designed in compliance with the Indian Designs Act, 2000, and has a unique shape, configuration and surface pattern.

They further submitted that their bottle PURO comes with certain features described below:

They further submitted that the packaging used by them was also unique and had words like BPA Free, Insulated Water Bottle, Break Free, Leak Proof etc. printed on them.

The Plaintiffs asserted that they widely advertised their bottle PURO and had a sale in excess of 7 crore and claimed that their product was widely popular and successful.

Further, they submitted that the PURO bottle do not have any novelty nor originality and is only a mere cobbling together several pre-existing known designs, or mere mosaicking.

They further averred that no bottle is novel or original and it is just a bottle and so Cello can't claim its bottle as novel and original. It further submitted that the design it used for KUDOZ was derived from its various bottles which it had launched earlier to KUDOZ. It also submitted that the shape of PURO bottle is the natural shape of a bottle.

The Defendants claimed that the Plaintiffs have designed their bottle based on the previous design of the bottles manufactured by the Defendants themselves and concluded their arguments by submitting that the Bombay High Court did not have territorial jurisdiction to entertain the suit.

The Court observed that the response submitted by the Defendants that a bottle is a bottle cannot be accepted as it is not possible to accept that no vertical cylindrical fluid container can be novel or original.

The Court rejected Modware's defense of mosaicking and stated that it is not a requirement of the law in infringement or passing off cases in relation to a design that every single aspect must be entirely newly concocted and unknown to the history of mankind.

The Court observed that this is an instance of design infringement by Modware as Modware's product was confusingly and deceptively similar to that of Cello's registered design.

The Court further observed that there was passing off done by Modware because it deceived consumers in believing that the bottle originated from them.

Thereafter, the Court observed that Cello has satisfied all three probanda to induce passing off action namely, (i) reputation and goodwill in the goods; (ii) misrepresentation by the Defendants; and (iii) damages.

The Court concluded that Cello had a good reputation in the market as they were an old company and also the sales turnout of PURO bottle was very high and cello had even advertised their product and the product had achieved a great deal of commercial success.

The Court also observed that Modware was attempting to deceive consumers into believing that its products came from the house of Cello. In other words, it was an attempt calculated to deceive and there was a misrepresentation by Modware that Cello's product was their own and hence the action of passing off against Modware.