India: Co-existing Patent And Trade Secret For An Invention

by Saransh Chaturvedi
Khurana and Khurana
Your LinkedIn Connections
with the authors
To print this article, all you need is to be registered or login on Mondaq.com.

In a important decision the Delhi High Court stated that the patent and trade secret cannot co-exist. This decision was very important in the light of protecting the same invention under patent and trademark. The case is of Prof. Dr. Cluadio De Simone & Anr. v. Actial Farmaceutica SRL. & Ors.,  provides a better clarity on the interplay of trade secret and patent protection.

The facts of the case are interesting. The plaintiff was an inventor for a US patent. The patent, a De Simone formulation which is useful for dietary and pharmaceutical indications, expired in 2015. This patent was not registered in India. The patent dealt into the bacterial formulation consisting of strain selection and blending ratio which the plaintiff contended that it was maintained as trade secret. For effective marketing in India and having no patent as such, Plaintiff No.1 entered into a patent license agreement with Defendant No. 3 as a know-how agreement, which was to become effective upon the expiration of the Patent License Agreement. This was to ensure that Defendant No. 3 could continue to manufacture the formulation even after the patent expired. 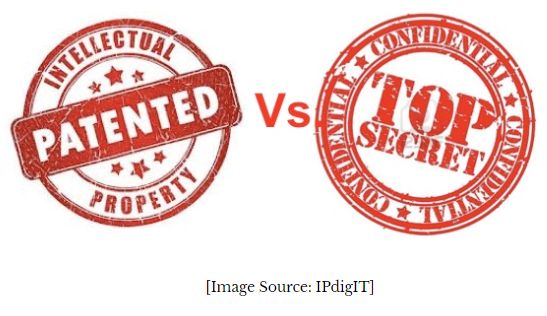 Gradually, the agreement was terminated after disagreement with plaintiff for using cheaper ingredients.  Eventually, since knowing the effective consideration for the drug, the defendant No. 4 made the counterfeit drug but they could not make the complete copy of the drug since they were not able to find exact bacteria. After the defendant publicise the new formulation, plaintiff sought injunction from linking it to De Simone Formulation.

The case delves into a question of getting into property rights for a non-patented product only by entering into a know-how agreement with a third party and claiming confidentiality. The court does answer in negative and rejected the contention of providing protection for unpatented product under trade secret. The know-how agreement that the plaintiff has sought for without having any such patent protection cannot be provided any such protection reiterating the fact that Indian laws does not equate trade secret with the property rights.

The plaintiff does not have any such patent on their product and even the patent has expired in the US, so ultimately the patent is in the public domain and so the disclosure being made in the patent is in the public domain which all can use while manufacturing the same formulation drug. Providing the trade secret protection will extend the ambit of patent law. The infringement for a patent totally depends upon the fact that the competitor's technology falls within the scope of claim of the patent.

Most of the patented drugs can be easily reversed engineered. Since while filing the patent, all the disclosure has to be made which mostly make the viability of the confidentiality in terms of trade secret for no use. Looking at the trade secret and patent, it greatly overlaps to various extents since different aspect of the patent might require different protection. If a particular invention has already been patented, the patentee cannot protect the same "invention" i.e. the information which is already disclosed by the patent as a "trade secret"/ "confidential information" through a know-how agreement. To the extent that the invention is already disclosed, after the expiry of the patent, third parties are free to make and use the information disclosed in the patent.

This decision was interesting in purview of deciding the double protection being relied by the pharmaceuticals companies in terms of patents and trade secret. But the court did not delve into the basic fundamental proposition dealing with the trade secret. The patent discloses the invention to the world at large which is in the public domain after the patent expires, a fundamental principle that is known. But what about those inventions which are treated under the purview of know-how between parties where it is not patented. The fact that the patent license agreement and know-how agreement are not same does constitute a presumption of protecting the know-how as well. The court did not delve into the know-how which might not be covered by the patent. The court could have examined the patent and determine that whether the technology in question was disclosed by the patent or not.

ARTICLE TAGS
India Intellectual Property Patent Trade Secrets
POPULAR ARTICLES ON: Intellectual Property from India
Patent Law in India
Anand & Anand
The Patents Act 1970, along with the Patents Rules 1972, came into force on 20th April 1972, replacing the Indian Patents and Designs Act 1911. The Patents Act was largely based on the recommendations of the Ayyangar Committee Report headed by Justice N. Rajagopala Ayyangar. One of the recommendations was the allowance of only process patents with regard to inventions relating to drugs, medicines, food and chemicals.
Patents Law In India - Everything You Must Know
Vaish Associates Advocates
The presentPatents Act, 1970 came into force in the year 1972, amending and consolidating the existing law relating to Patents in India
Assignment And Licensing Of Copyright
Singh & Associates
Copyright is a protection given to the creators of certain types of works as an acknowledgment to their intellectual input
Deceptive Similarity And Judicial View
Khurana and Khurana
Trademarks play a vital role in creating a brand name and goodwill of any business. Not only does it helps in creating a brand value but also, aids in revenue generation.
All You Need To Know About "Well-Known Trademarks"
Khurana and Khurana
With coming up of the new Trade Mark Rules 2017, a new procedure has been created that allows the Registrar to proclaim a particular trademark as "well known".
Concept Of Fair Use And Fair Dealing In Copyright
Singh & Associates
Fair use supports "socially laudable purposes," typically, if not exclusively, involving the use of the copyrighted work by a second author
FREE News Alerts
Sign Up for our free News Alerts - All the latest articles on your chosen topics condensed into a free bi-weekly email.
Register For News Alerts
Article Tags
India Intellectual Property Patent Trade Secrets
Related Articles
Copyright (Amendment) Rules, 2021: Key Takeaways Singh & Associates
Appellate Board/Tribunal No More Krishna & Saurastri Associates
IPAB Ceases To Exist In India Khaitan & Co
Colossal Win For Google As SCOTUS Affirms ‘Fair Use' Kochhar & Co.
Copyright (Amendment) Rules 2021 Come Into Force And An Ordinance Abolishes The Intellectual Property Appellate Board Khaitan & Co
Mondaq Webinars
The Impact of COVID-19 on the Energy Industry and the Resolution of the Attendant Disputes
Dorothy Ufot & Co
Webinar Lagos Nigeria
World IP Day – Top Patent Cases of the year 2020 in Turkey and UK Perspective
Gun + Partners
Webinar Istanbul Turkey
More Webinars
Comparative Guides
Alternative Investment Funds
Blockchain
Cartels
Cybersecurity
Data Privacy
Mondaq Advice Centres
India
Trademarks
India
Arbitration, Litigation and Conciliation
India
Insolvency
Global
Trademarks in SAARC Countries
Global
Investment Immigration
More MACs
Upcoming Events
Mondaq Social Media