India: Types Of Patents Granted And Basis For Rejection

by Tushar Kohli
S&A Law Offices
Your LinkedIn Connections
with the authors
To print this article, all you need is to be registered or login on Mondaq.com.

A PCT Application is an international application to streamline patent application process in many countries at one go. It is governed by the Patent Corporation Treaty and can be validated in up to 142 countries.

The applicant can file a patent of addition if there is a modification of the invention which has already been applied for or patented. A patent of addition can only be granted after the grant of the parent patent; hence, no separate renewal fee is to be remitted during the term of the main patent.

Criteria for a patent to be granted

Basis for rejection of patents in India1

Further, as illustrated in the table above, section 3 was used in 65% of cases either singly or in combination with other sections to reject the patent applications. Out of the total number of 1723 applications, 1113 applications were rejected by citing section 3 as an objection.

REJECTION OVERVIEW: PHARMA VS OTHERS2 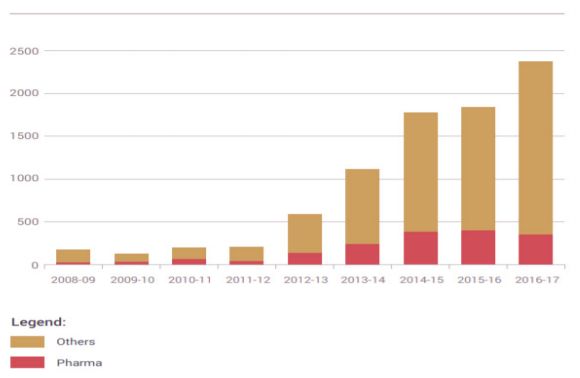 It is evident from the graph below that rejection of pharma were reduced as compared to the non-pharma patents, wherein the rejections were increased.

ARTICLE TAGS
India Intellectual Property Patent
POPULAR ARTICLES ON: Intellectual Property from India
Assignment And Licensing Of Copyright
S&A Law Offices
Copyright is a protection given to the creators of certain types of works as an acknowledgment to their intellectual input
Delhi High Court Defines Criminal Liability Against Online Marketplaces In India
JSA
One of the most scariest and intimidating situations for any person and more so for employees is being charged in criminal prosecutions in their official capacities on behalf of company/firm...
Trade Marks And The Metaverse: Recent Trends In India
Sujata Chaudhri IP Attorneys
In the post covid era, the ‘Metaverse' has become one of the most hotly discussed technological advancements globally. More and more brands are choosing to launch their products and advertise...
Is Your Startup Investable?
Photon legal
An investable strategy focuses on the allocation of capital resources towards a business goal. It has been around for a while and is effective in mitigating risk and guiding capital...
A Study On: Novartis AG v. Union Of India
Khurana and Khurana
Intellectual property is an intangible form of property while a ‘Patent' is a subset of intellectual property.
[IP ASIA] Gems Bond Vs James Bond: Cadbury Wins In India
HFG Law & Intellectual Property
In a case that goes back as 2005, between Mondelez India Foods Pvt Ltd, better known as Cadbury, and Neeraj Food Products, the Delhi High Court has finally made its judgement, ruling in favor of the plaintiff.
FREE News Alerts
Sign Up for our free News Alerts - All the latest articles on your chosen topics condensed into a free bi-weekly email.
Register For News Alerts
Article Tags
India Intellectual Property Patent
Related Articles
The Positive Trend Towards Settlement Of Trademark Disputes Through Mediation Clasis Law
Scepticism Revolving Around ‘Pre-Litigation Mediation' In IP Matters Khurana and Khurana
Getting To Grant: Patent Prosecution In India Obhan & Associates
Un-Reasoned Order May Invoke Writ Jurisdiction Of Indian Court In A Patent Opposition L. S. Davar & Co.
Delhi High Court Reiterates The Liabilities Of Intermediaries S.S. Rana & Co. Advocates
Mondaq Webinars
Recent Global Private Capital Developments Seen from a Channel Islands Perspective
Mourant
Litigation Funding in Canada
Nomos Capital Corp.
More Webinars
Comparative Guides
Alternative Investment Funds
Artificial Intelligence
Aviation Finance
Aviation Regulation
Blockchain
More Guides
Mondaq Advice Centres
India
Trademarks
India
Arbitration, Litigation and Conciliation
India
Insolvency
Global
Trademarks in SAARC Countries
More MACs
Curated Content
Fast Tracking Through The Patent Prosecution Highway In India
Obhan & Associates
Divisional Applications And Plurality Of Invention In India
Obhan & Associates
Do Scientific Publications Exempt Patent Applications From Anticipation?: The Indian Position
Obhan & Associates
Preparing For Invention Disclosure Meetings: A Guide For Inventors
Obhan & Associates
Patenting 3d Bioprinting In India
Obhan & Associates