by Heena Lamba
Singh & Associates
Your LinkedIn Connections
with the authors

Intellectual property rights (IPR) is now a well-accepted concept rightly utilized by creators to protect their intangible creations and enjoy an array of benefits ranging from exclusive rights to gaining royalties from licensees. IPRs usually bring monetary benefits to its creators and consequently also to the nation. Revenue generated from IPRs in the year 2016-17 was estimated to be ₹ 60831.51 lakh as per the Annual Report 2016-17 of the Office of the Controller General of Patents, Designs, Trade Marks and Geographical Indications. Looking at its potential to generate revenues and foster further research and innovativeness, IPRs have now become important indicator for the economic growth of the country.

Major stakeholders in generating IPRs include public and private universities, multinational companies, R&D organizations, scientific institutions, industry, business organizations, SMEs, MSMEs, startups and individuals1. Among these, Universities are considered to be the prime sites of knowledge creation. It has been shown that academic research carried out by scientists and researchers especially in collaboration with multinational companies and funding

agencies have broader scope, wider field of application across different disciplinary fields and value as compared to non-academic research2. This creation of basic research should get commercialized by transferring the technology through various means such as movement of the inventor with knowledge and skills to different institute or sector, publication of invention, inter-institute or institute-industry collaborations, consultation, entrepreneurial activities and licensing3.

Sadly, the reality is different from what is usually expected from a research outcome. While carrying out research in an Institute or University, being novel and inventive is the first criterion that the researchers need to demonstrate over the prior art. Valuable IPs can be generated easily from such research by further modelling it to have industrial applicability. But even after funding and hardships of the researcher, the invention or the conclusion of their work goes in vain. The reason being lack of an ecosystem, which can direct minds of the researchers perpetually toward creating as much IPs from their work as possible4. It is well quoted by renowned scientist Prof Roddam Narasimha that 'We don't lack talent or entrepreneurship but we lack the ecosystem'. Because of the present ecosystem, researchers do not seem to be aware of the benefits they could achieve, both

in their career and financially, by disclosing their invention legally rather than putting it directly in public domain through research papers.

The basic outcome of research comes in the public domain as a publication or as a commercial product. In 2016, India held 5th rank among all the countries in terms of the number of publications as per Scimago Journal & Country Rank5, but its ranking in commercialization especially in terms of generating IPRs was still lagging at 45th rank6. This difference in the rankings clearly reflects the unwillingness of Indian researchers to convert their innovation into technologies/products/patents. The same is also evident from the figure shown below, which clearly shows difference in the number of publications and number of patents owned by a University or a research Institute in India7. 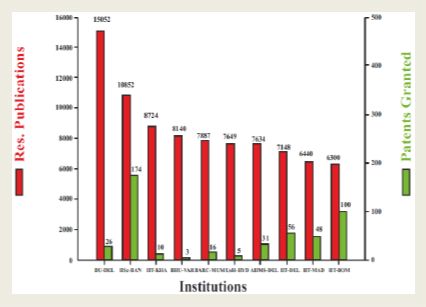 In order to bridge this gap between knowledge creation and lack of awareness to get it protected or commercialized, many awareness programs are being conducted pan India by government organizations, R&D institutions, universities and NRDC in association with Intellectual Property Offices and in collaborations with industry associations like FICCI, CII and ASSOCHAM. Funds have been allocated for this purpose through special projects like Cell for IPR Promotion and Management (CIPAM). But despite fund allocations for awareness creation, a research conducted by Einfolge, an international patent analytics and market research company in 203 educational institutions in Karnataka, Tamil Nadu, Kerala and Telangana revealed the following facts8:

The study clearly shows that a lot more needs to be done than just creating awareness. Need of the hour is 'Change in Research Ecosystem'. Given below are some criteria that can be adopted to bring in some change9:

IPR to be a part of curriculum in schools, universities and Institutes to give sufficient time and exposure to the coming generation to imbibe the IPR culture

1 Annual Report 2016-17 of the Office of the Controller General of Patents, Designs, Trade Marks and Geographical Indications. Available at http://ipindia.nic.in/writereaddata/Portal/IPOAnnualReport/1_94_1_1_79_1_Annual_Report-2016-17_English.pdf .

2 The Ownership of Academic Patents and Their Impact. Available at https://www.cairn.info/revue-economique-2015-1-page-143.htm

3 The University and the Transfer of Technology: Principal Findings and Recommendations. Available at https://www.nap.edu/read/13001/chapter/2#2

4 One US firm files 135% more patents in India than all top labs together. Available at https://timesofindia.indiatimes.com/business/india-business/us-firm-filed-100-more-patents-in-india-than-all-top-labs-together/articleshow/65110947.cms

9 Academic Patenting: How universities and public research organizations are using their intellectual property to boost research and spur innovative start-ups. Available at www.wipo.int/sme/en/documents/academic_patenting.htm

ARTICLE TAGS
India Consumer Protection Education Intellectual Property Patent
POPULAR ARTICLES ON: Intellectual Property from India
Patent Law in India
Anand & Anand
The Patents Act 1970, along with the Patents Rules 1972, came into force on 20th April 1972, replacing the Indian Patents and Designs Act 1911. The Patents Act was largely based on the recommendations of the Ayyangar Committee Report headed by Justice N. Rajagopala Ayyangar. One of the recommendations was the allowance of only process patents with regard to inventions relating to drugs, medicines, food and chemicals.
Assignment And Licensing Of Copyright
Singh & Associates
Copyright is a protection given to the creators of certain types of works as an acknowledgment to their intellectual input
Compulsory Licensing In India
Khurana and Khurana
WIPO defines patent as an exclusive right granted for an invention, which is a product or a process that provides, in general, a new way of doing something, or offers a new technical solution to a problem
Patent Specification - Where The Rubber Meets The Road
Singh & Associates
In order to obtain a patent, an applicant must fully and particularly describe the invention therein claimed in a complete specification.
What Can Be Patented In India?
Intepat IP Services Pvt Ltd
Sections 3 and 4 of the Indian Patents Act, 1970 specifically state exclusions to what can be patented in India.
What Is Patent Claim And Types Of Patent Claims
Intepat IP Services Pvt Ltd
A patent claim is indisputably the most important part of a patent specification. It defines the boundary of the patent.
FREE News Alerts
Sign Up for our free News Alerts - All the latest articles on your chosen topics condensed into a free bi-weekly email.
Register For News Alerts
Article Tags
India Consumer Protection Education Intellectual Property Patent
Related Articles
Cognizance Of Offences Under Section 63 Of Copyright Act S.S. Rana & Co. Advocates
Why Incubation Centres Should Promote IP Education Photon legal
Combating COVID-19 Or Generating Profits: What's More Crucial? Photon legal
How To Choose The Best Brand Name For Your Business Verum Legal
Shamoil Ahmad Khan v. Falguni Shah: Scrutinizing The Idea-Expression Dichotomy Khurana and Khurana
Mondaq Webinars
Reshaping Strategies for Wealth Management in the Post-Pandemic Economy [REPLAY]
Wedlake Bell
Webinar London UK
Hot Topics in Fund Finance [REPLAY]
Cadwalader, Wickersham & Taft LLP
Webinar New York United States
More Webinars
Comparative Guides
Alternative Investment Funds
Artificial Intelligence
Aviation Finance
Aviation Regulation
Blockchain
More Guides
Mondaq Advice Centres
India
Trademarks
India
Arbitration, Litigation and Conciliation
India
Insolvency
Global
Trademarks in SAARC Countries
More MACs