The imposition of cancellation charges or fees by various e-commerce entities on consumers has been a contested issue - was it justified? Or was it a method to gather unfair revenue? The Consumer Protection (E-Commerce) Rules, 2020 ("E-commerce Rules") issued under the aegis of the Consumer Protection Act of 2019 ("Act") wades into this debate, attempts to clarify the issue and succeeds in muddying the waters.

THE LEGAL FRAMEWORK ON CANCELLATION CHARGES

The Act appears to recognise that the imposition of a penalty on a consumer for cancellation that is wholly disproportionate to the loss incurred by the entity is an 'unfair contract'. The E- commerce Rules explicitly prohibit e-commerce entities from imposing cancellation charges on consumers who unilaterally, for any reason, cancel a confirmed purchase order, unless similar charges are borne by these entities.

In brief, Indian law permits the imposition of cancellation charges by e-commerce entities provided that:

Further, the law has not provided any quantum of fee that can be charged by the entities or any criteria to determine whether a cancellation fee is disproportionate or unreasonable. It appears that such an assessment would have to be undertaken on a case-to-case basis. CE- commerce entities (particularly, marketplace entities) that impose cancellation charges on its consumers for the unilateral cancellation of a purchase order would be required to pass on a portion of the cancellation charge onto them.

The consumers aggrieved by the imposition of cancellation charges have a right to seek redress before consumer protection authorities constituted under the Act, and an order may be passed by such authorities upon adjudication. Failure to comply with such order shall be punishable with imprisonment for a period that may extend to three years, or with fine that may extend up to INR 100,000, or with both.

While the intent is laudable, much ambiguity persists. Is cancellation fee only permissible to the extent of costs incurred? Can e-commerce companies impose fines / fees on persons who are constantly cancelling? These aspects require careful deliberation and the regulations would need to be tested by the judiciary for guidance.

(Collected from publicly available information. Do reach out – if we have not completely captured the practice). 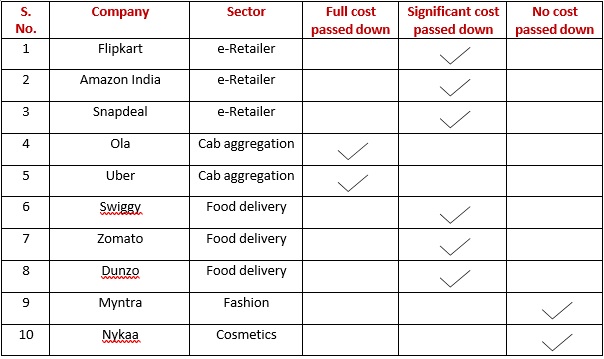