by Moonmoon Nanda and Palash Taing
Singh & Associates
Your LinkedIn Connections
with the authors
To print this article, all you need is to be registered or login on Mondaq.com.

PROVISIONS OF EA UNDER RULES AMONG DIFFERENT SETS OF ARBITRATION INSTITUTIONS

EAP UNDER ICC RULES OF ARBITRATION

Article 29 of the ICC Rules of Arbitration provides for EA and states that a party that needs urgent interim or conservatory measures that cannot await the constitution of an arbitral tribunal may make an application for such measures. However, Article 29 of the ICC Rules does not apply to agreements entered into before the commencement of the said rules i.e. prior to January 1, 2012. For agreements that provide for ICC arbitration, entered into after January 1, 2012, Article 29 is applicable, unless expressly opted out in the agreement.

It is to be noted that Article 29 only allows interim and conservatory relief that cannot await the constitution of the Tribunal and does not contemplate or allow any kind of fast-track or summary proceedings on the merits. The EAP would precede the arbitral proceedings but will not substitute the said proceedings. The application has to be made prior to the transmission of the file to the arbitral tribunal and irrespective of whether the party making the application has already submitted its Request for Arbitration.

The EA's decision would take the form of an order and the parties have to undertake to comply with any order made by the EA. However, such order would not bind the arbitral tribunal with respect to any question, issue or dispute determined in the order. The Arbitral Tribunal once appointed subsequently, may modify, terminate or annul the order. The EAP uses the term 'arbitrator' to designate the EA who is called upon to adjudicate a request for interim measures. The EA does not act as a mediator or a settlement facilitator and although his mandate is similar. He is neither an adjudicator nor a referee but an arbitrator with a very specific and limited mandate. Further, unlike a normal arbitrator, the EA can only provide temporary relief but not decide the merits of the dispute.

PROVISIONAL MEASURES TO PRESERVE THE SUBJECT MATTER OF THE DISPUTE

Article 28 of the ICC Rules of Arbitration discusses the provisional measures to preserve the subject matter of the dispute. While the state courts are generally equipped to grant provisional relief to parties, parties to international business transactions may be reluctant to refer matters to state courts to obtain such relief. There may exist a real or perceived lack of neutrality of state courts in some countries and/or the judicial functioning of these courts may not be guaranteed. There may also be an apprehension for reasons of confidentiality, and many other reasons that may deter a party in a given case from seeking interim relief before the state courts. Thus, where parties have agreed to arbitration, it was considered appropriate to provide them also with the possibility of provisional relief under the rules prior to the constitution of the Tribunal.

By not giving the EA the possibility to grant provisional relief in the form of an interim Award, a marked difference exists with the provisional relief a Tribunal can grant pursuant to Article 28(2) of the ICC Rules of Arbitration; it can either be in the form of an Award or of an Order. However, unlike the ICC, other arbitral institutionshave given the EA the power to issue either an award or an order

TIMELINES FOR EAP UNDER ICC RULES OF ARBITRATION

The EAP provides for a timeline of 18 days from the day of filing the application with the Secretariat until the notification of the order by the EA. 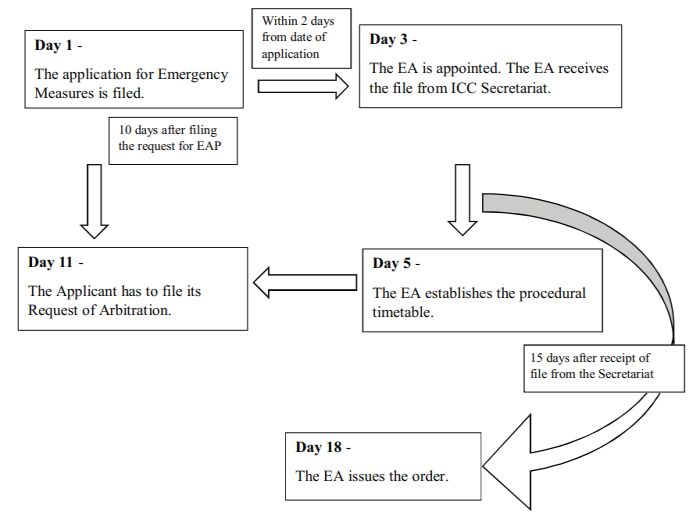 PROVISION OF EA IN INDIA

"Section 2(d): 'Arbitral tribunal' means a sole arbitrator or a panel of arbitrators and, in the case of an arbitration conducted under the rules of an institution providing for appointment of arbitrator, includes such emergency arbitrator."

However, while the provisions of EAP are similar to Section 9 of the Arbitration and Conciliation Act, 1996, they provisions are generally not related. Except the difference in the timeline for obtaining an interim order, EAP and proceedings under Section 9 of the Arbitration and Conciliation Act, 1996 are similar in substance. In either, parties cannot seek final determination of the dispute in merits and can only obtain a preliminary order protecting the subject matter of the dispute, which can be modified, altered or upheld by the Arbitral Tribunal. Judicial decisions pertaining to EA are rare in India. In the few cases regarding the EA Order, the courts have recognized and honored its validity.

In HSBC PI Holdings (Mauritius) Limited v. Avitel Post Studioz Limited and Ors.3 , the Claimant had sought for and obtained emergency orders from the EA under the SIAC Rules of Arbitration. The EA had granted emergency relief and ordered for freezing of bank accounts of the Respondent. The Claimant subsequently filed a petition under Section 9 of the Arbitration and Conciliation Act, 1996 in view of the order of the EA and the Bombay High Court upheld the order of the EA and directed to freeze the bank accounts. In Raffles Design International India Private

In Raffles Design International India Private Limited & Ors. v. Educomp Professional Education Limited & Ors4 , the Claimant resorted to EA seated in Singapore under the SIAC, wherein an interim order was passed by the EA. The Claimant enforced the EA order in the High Court of Singapore. The Claimant once again filed an application under the amended Section 9 of the Arbitration and Conciliation Act, 1996 seeking interim reliefs alleging that the other party is acting in contravention to the orders passed in the EA award. The Court held that in such circumstances, the emergency award passed by the Arbitral Tribunal cannot be enforced under the Act and the only method for enforcing the same would be for the petitioner to file a suit. However, the Court further observed that a party seeking interim measures cannot be precluded from doing so only for the reason that it had obtained a similar order from an arbitral tribunal. Needless to state that the question whether the interim orders should be granted under section 9 of the Act or not would have to be considered by the Courts independent of the orders passed by the arbitral tribunal.

Therefore, in the event that a party fails to comply with the EA order, it may be enforceable in nature under the provisions of various national laws depending upon the discretion of national courts and national laws which may or may not include Emergency Arbitration provisions. Although, EA has been globally accepted by several Arbitration Institutions, India is yet to give a formal statutory recognition to EA awards.

ARTICLE TAGS
India Litigation, Mediation & Arbitration Arbitration & Dispute Resolution
POPULAR ARTICLES ON: Litigation, Mediation & Arbitration from Worldwide
The Arbitration And Conciliation (Amendment) Act, 2021
Obhan & Associates
On March 10, 2021, the Arbitration and Conciliation (Amendment) Act, 2021 ("Amendment Act") gained Parliamentary assent and is deemed to have come into force on November 04, 2020...
Articles 226 And 227 Of The Constitution Of India – Their Scope, Powers And Differences
Singh & Associates
The jurisdiction of 226 and 227 is vast and has to be exercised sparingly.
Powerplay Between The Courts And Arbitral Tribunals: Scope Of Section 9 And 17 Of The Arbitration & Conciliation Act
Singh & Associates
Disputes arising out of a contract containing an arbitration clause, unless specified otherwise, are referred to arbitration.
Significant Judgments On Arbitration And Conciliation Act, 1996 - May, 2020 To July, 2020
Argus Partners
This compilation seeks to identify the significant developments in arbitration law by the courts of India after the advent of the COVID-19 pandemic.
The Seat v/s.Venue Debate – A Continuing Saga
The Law Point
The concepts of ‘Seat' and ‘Venue' are of utmost significance in any arbitration proceeding as they not only determine where the arbitration...
Dispute Resolution And Arbitration Monthly Update | March 2021
HSA Advocates
The Arbitration and Conciliation (Amendment) Bill, 2021 (Bill) was introduced in Lok Sabha on February 04, 2021.
FREE News Alerts
Sign Up for our free News Alerts - All the latest articles on your chosen topics condensed into a free bi-weekly email.
Register For News Alerts
Article Tags
India Litigation, Mediation & Arbitration Arbitration & Dispute Resolution
Related Articles
Dispute Resolution: Legal Milestones Financial Year 2020-21 And A Look Ahead Trilegal
Arbitration Agreements Outside The Scope Of A Signed Document: An Unconventional Mechanism To Submit A Dispute To Arbitration AKS Partners
Supreme Court Ends Extension Of Limitation Period Krishna & Saurastri Associates
Indian Arbitration Quarterly Roundup 2021 (January 2021 To March 2021) Phoenix Legal
Is An Arbitral Tribunal Permitted To Lift The Corporate Veil In An Arbitration Proceeding? AKS Partners
Mondaq Webinars
Visas, Work Visas/ Residence Permits and Nigeria's New Visa Policy
Famsville Solicitors
Webinar Lagos Nigeria
Competition Law Compliance Programs and Trainings: Client Experiences and Notes for the Future
ELIG Gürkaynak Attorneys-at-Law
Webinar Istanbul Turkey
More Webinars
Comparative Guides
Alternative Investment Funds
Artificial Intelligence
Blockchain
Cartels
Cybersecurity
Mondaq Advice Centres
India
Arbitration, Litigation and Conciliation
India
Trademarks
India
Insolvency
Global
Trademarks in SAARC Countries
Global
Investment Immigration
More MACs
Upcoming Events
Mondaq Social Media