The latest amendments to the Arbitration Rules of the London Court of International Arbitration ("LCIA Rules, 2020") were released on 11 August 2020. The 2020 Rules have sought to further streamline the arbitration process by expressly delineating the powers of tribunals and the LCIA Court under various circumstances. Examples include the possibility of early dismissal, a wider power of consolidation, concurrent proceedings and express powers to expedite proceedings. Notably, the LCIA Schedule of Costs has also been revised.

Applicability of the Rules

The LCIA Rules, 2020 were unveiled on 11 August 2020. They took effect on 1 October 20201 and apply to arbitrations commenced from that date onwards.

The provision relating to Emergency Arbitration, however, will not apply to arbitration agreements concluded before 1 October 2014.

Article 14.4 read with 14.5 of the 2014 Rules accorded the Tribunal "the widest discretion" aimed towards "......avoiding unnecessary delay and expense, so as to provide a fair, efficient and expeditious means for the final resolution of the parties' dispute." Thus, the Tribunal's power of early dismissal of a claim was often regarded as implicit.

Article 22(viii)2 of the 2020 Rules makes the above power explicit. It allows arbitrators to expedite proceedings by making an "Early Determination" order when they decide that a particular application is either manifestly outside the jurisdiction of the Arbitral Tribunal, inadmissible or manifestly without merit.

This brings the LCIA Rules at par with the SIAC Rules, 20163 and the HKIAC Rules, 20184 that also provide for early dismissal of claims.

The newly introduced Article 22A5 in the 2020 Rules contemplates a third situation in which consolidation may be ordered. Consolidation is now possible in case of arbitrations commenced under the same arbitration agreement or any compatible arbitration agreement(s) and arising out of the same transaction or series of related transactions - even if the disputing parties are not the same. Tribunals also have the power to order that such arbitrations shall be conducted concurrently where the same arbitral tribunal is constituted in respect of each arbitration.

Increased use of technology

A new section dealing with Data Protection has been introduced under Article 30A. Any processing of personal data by the LCIA is subject to the applicable data protection legislation. The LCIA and the Arbitral Tribunal may issue directions addressing information security or data protection, which shall be binding on the parties, and in the case of those issued by the LCIA, also on the members of the Arbitral Tribunal. This makes the LCIA the first arbitral institution to explicitly provide for such safeguards in its rules.

Under Article 30.113 of the 2020 Rules, the parties are now also obliged to seek the same undertaking of confidentiality from all those that are involved in the arbitration, including but not limited to any authorised representative, witness of fact, expert or service provider. This obligation also extends to the Tribunal, Tribunal secretary and any expert to the Tribunal.

The LCIA is the first arbitral institution to provide for a specific governing law clause to apply to its Rules. Article 16.5 of the 2020 Rules provides that notwithstanding the law applicable at the seat, the LCIA Rules shall be interpreted in accordance with the laws of England. Further, the 2020 Rules have also introduced Article 31.3 which gives exclusive jurisdiction to the courts of England and Wales to hear and decide any action, suit or proceedings arising between the parties and the LCIA, the LCIA Court, the LCIA Board, the Registrar, any arbitrator, tribunal secretary or expert for matters arising out of or in connection with an LCIA arbitration.

The LCIA's Schedule of Costs has been updated and reflects a 10-12 % increase when compared to the 2014 Schedule of Costs. Notable changes include an increase in the registration fee and Secretariat costs. More importantly, the maximum hourly rate to be charged by arbitrators has been increased to £500 from the earlier £450 amount. A detailed breakdown of changes in costs is set out at Schedule A, hereunder.

While the 2020 Rules cover a wide range of issues, improving overall efficiency appears to be the main focus of the amendments. This is evidenced by a move towards greater use of technology in arbitration proceedings as seen in the express recognition of virtual hearings and electronically-signed awards. Considering the "new normal" brought about by the Covid-19 pandemic, the above changes are a welcome step. 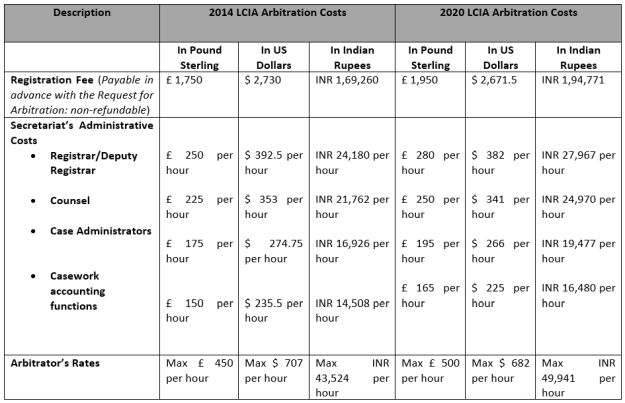 1 Updates to the LCIA Arbitration Rules and LCIA Mediation Rules (2020) available at https://www.lcia.org/lcia-rules-update-2020.aspx.

2 Article 22.1(viii) states "The Arbitral Tribunal shall have the power, upon the application of any party or (save for sub- paragraph (x) below) upon its own initiative, but in either case only after giving the parties a reasonable opportunity to state their views and upon such terms (as to costs and otherwise) as the Arbitral Tribunal may decide to determine that any claim, defence, counterclaim, cross-claim, defence to counterclaim or defence to cross-claim is manifestly outside the jurisdiction of the Arbitral Tribunal, or is inadmissible or manifestly without merit; and where appropriate to issue an order or award to that effect."

5 Article 22.7(iii) states "The Arbitral Tribunal shall have the power to order with the approval of the LCIA Court, upon the application of any party, after giving all affected parties a reasonable opportunity to state their views and upon such terms (as to costs and otherwise) as the Arbitral Tribunal may decide: that two or more arbitrations, subject to the LCIA Rules and commenced under the same arbitration agreement or any compatible arbitration agreement(s) and either between the same disputing parties or arising out of the same transaction or series of related transactions, shall be conducted concurrently where the same arbitral tribunal is constituted in respect of each arbitration."

8 Article 26.2 states ".Unless the parties agree otherwise, or the Arbitral Tribunal or LCIA Court directs otherwise, any award may be signed electronically and/or in counterparts and assembled into a single instrument."

9 Article 1.2 states "A Claimant wishing to commence more than one arbitration under the LCIA Rules (whether against one or more Respondents and under one or more Arbitration Agreements) may serve a composite Request in respect of all such arbitrations, provided that the requirements of Article 1.1 are complied with to the satisfaction of the LCIA Court in respect of each arbitration. In particular, in any composite Request the Claimant must identify separately the estimated monetary amount or value in dispute, the transaction(s) at issue and the claim advanced by the Claimant against any other party in each arbitration. Each arbitration so commenced shall proceed separately and in accordance with the LCIA Rules, subject to the LCIA Court or the Arbitral Tribunal determining otherwise."

10 Article 5.6 states "The LCIA Court shall appoint the Arbitral Tribunal promptly following delivery to the Registrar of the Response or, if no Response is received, promptly after 28 days from the Commencement Date (or such other lesser or greater period to be determined by the LCIA Court pursuant to Article 22.5)."

11 Article 14.3 states "The parties and the Arbitral Tribunal shall make contact (whether by a hearing in person or virtually by conference call, videoconference or using other communications technology or exchange of correspondence) as soon as practicable but no later than 21 days from receipt of the Registrar's written notification of the formation of the Arbitral Tribunal."

12 Article 15.10 states "In any event, the Arbitral Tribunal shall seek to make its final award as soon as reasonably possible and shall endeavour to do so no later than three months following the last submission from the parties (whether made orally or in writing), in accordance with a timetable notified to the parties and the Registrar as soon as practicable (if necessary, as revised and re-notified from time to time). When the Arbitral Tribunal (not being a sole arbitrator) establishes a time for what it contemplates shall be the last submission from the parties (whether written or oral), it shall set aside adequate time for deliberations (whether in person or otherwise) as soon as possible after that last submission and notify the parties of the time it has set aside."

13 Article 30.1 states "The parties undertake as a general principle to keep confidential all awards in the arbitration, together with all materials in the arbitration created for the purpose of the arbitration and all other documents produced by another party in the proceedings not otherwise in the public domain, save and to the extent that disclosure may be required of a party by legal duty, to protect or pursue a legal right, or to enforce or challenge an award in legal proceedings before a state court or other legal authority. The parties shall seek the same undertaking of confidentiality from all those that it involves in the arbitration, including but not limited to any authorised representative, witness of fact, expert or service provider."