It's time to talk about mental health and well-being in the legal profession. The overwhelming majority of lawyers working at firms in Spain and Portugal believe the profession is not doing enough to tackle this issue, according to a new survey conducted by Iberian Lawyer. It's certainly not an issue that should be ignored – participants in our study spoke of colleagues they have known who, plagued by depression, ended up taking their own lives. Mental health is, of course, an incredibly complex subject and any problems suffered by lawyers may not necessarily be caused by the work they do. However, the vast majority of respondents to our survey said they believed "a large workload" was the most common cause of the mental health problems they, or their colleagues, had suffered. The impact of a large workload can mean demands being placed on lawyers to be "permanently connected" and unable to switch off. One respondent said: "Permanent connectivity (for example, email, whatsapp, mobile phone) could be a factor which increases the already difficult work-life balance – large law firms will probably end up setting up internal policies to tackle the problem, but the question is whether mid-sized firms will be able to follow suit due to the ever-existing pressure which they face." 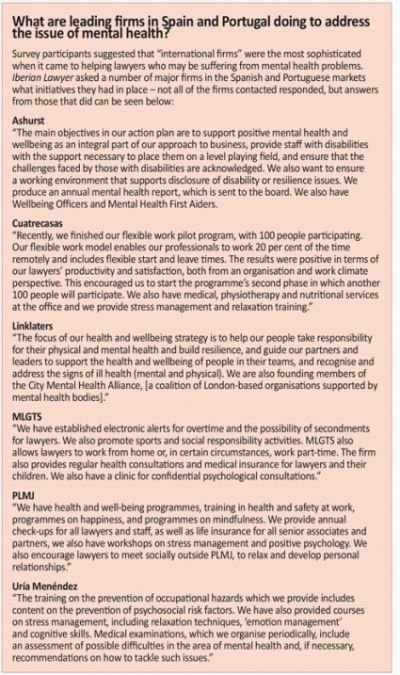 Regarding suicide among lawyers, it seems unclear whether there are work-related factors involved. One respondent talked of a colleague who had committed suicide, but said they believed the cause was the fact they were "schizophrenic", and prone to "obsessive behaviour". However, another participant in the study told the story of a colleague who made "several suicide attempts that finally resulted in death – he was admitted to a psychiatric hospital for some time which was a really tough experience, he never recovered, he was brilliant at his work and could literally work for 24-hours". When the study participant was asked what they believed was the cause of their colleague's mental health problems, they attributed it to two factors: "relationship problems" and "a large workload".

Indeed, large workloads and relationship issues are the main causes of mental health problems among lawyers, according to the study.  A total of 79 per cent said "a large workload" had caused them, or a colleague, to suffer mental health problems, while 48 per cent said "relationship problems" had been the cause. However, interestingly, while on the surface relationship problems may not appear to be a work-related issue, it was suggested that lawyers are particularly at risk of suffering difficulties in their family life. "Myself and many others face the obvious challenge of balancing work (large workload/long hours/travel) with family life or marriage," said one study participant. "Clients often get priority and 'win' the battle to the detriment of their family or personal life – even the toughest of lawyers have difficulty facing this, and indeed suffer from it. This can sometimes result in stress in the workplace or difficult behaviour with peers and colleagues." Other causes of mental health problems among lawyers include financial problems (cited by 14 per cent of participants with experience of such problems) and bullying or harassment (13 per cent).

Mental health problems are not only impacting on members of the legal profession in Iberia, as recent research has shown. Charity LawCare – which "promotes good mental health and well-being in the UK legal community" – recently reported that it had received an 11 per cent increase in calls in 2017, with "nearly half of the solicitors and barristers who called citing depression (17 per cent) and workplace stress (27 per cent) as the reasons they were in need of help".

The good news is that it seems a significant proportion of lawyers in Iberia who are suffering from mental health problems are seeking help. The study showed that 50 per cent of respondents with experience of mental health problems said they, or the colleague in question, had sought "professional help". However, 45 per cent said they did not know whether the colleague affected had sought professional help, while 5 per cent said they, or the colleague in question, had not sought help. Despite some respondents saying that there was still a stigma surrounding mental health, respondents were unanimous in their belief that any lawyer who is suffering from mental health problems and who has not sought professional help, should do so. A number of leading law firms in Spain and Portugal have initiatives in place that aim to address the issue of mental health and well-being. One such firm is Garrigues, which said it offers its lawyers an occupational medicine and occupational risk prevention service, which consists of "occupational health physicians, company nurses and senior technicians in occupational risk prevention". A Garrigues statement said the service's objective is to "achieve the greatest possible level of welfare of Garrigues personnel by integral management of their health". The firm also said the service runs "awareness-raising campaigns" with the aim of preventing illnesses. It added that it also organised sporting events and the firm's cafeteria encouraged "healthy eating".

It's true that there is a view among some in the profession that a heavy workload and "permanent connectivity" are an unavoidable part of life as a lawyer – some would suggest that if you're not comfortable with this scenario, this is not the career for you. However, it is worth noting that survey participants suggested that mental health problems do not only impact on the sufferer themselves, but also on their colleagues. "One partner of a firm I worked with used to harass junior lawyers, just to see if they could stand the pressure," said one survey respondent. "Some of them could not and ended up needing medical help – what that partner did not realise was that he was suffering from acute mental problems. When I told him (we were supposed to be friends and nobody else dared do it), the world went mad."

So, it's clear that it is not only in the interests of lawyers' well-being that law firms address the issue of mental health, but it is also in firms' commercial interests as those suffering mental health problems may have a negative effect on the productivity of their colleagues. And the vast majority of lawyers believe the legal profession is not doing enough to tackle this problem – 80 per cent of respondents said they thought the legal profession "should do more to address the issue of mental health". Some respondents noted that "international law firms are becoming quite sophisticated" in the way they help lawyers suffering with mental health issues (see box).

However, while any action to improve mental health and well-being is to be applauded, study participants also indicated that, while there could be many lawyers in need of such help, there are doubts that all of them will seek it, given their large workloads. "There is a world of possibilities for therapists [in the legal profession]," said one participant. "The problem is that lawyers 'will not have time' to go to a therapist, but they should make time for their own sake and that of peers, colleagues and family members."