In this case, the appellant had a hard time arguing why the differences over the prior art provided a beneficial technical effect, because the description as filed was rather scarce in this respect. This decision is a good reminder of how important it is to explain the technical effects of the invention in detail in the application as filed.

The identification of an effect produced by novel features is essential in the problem and solution approach, because such an effect provides basis for the formulation of the objective technical problem.

This European patent application concerns a method for editing a chart presented in a host application. Users may request updates to the displayed chart with keystrokes or mouse clicks. The update processing varies depending on the nature of the requested updates: 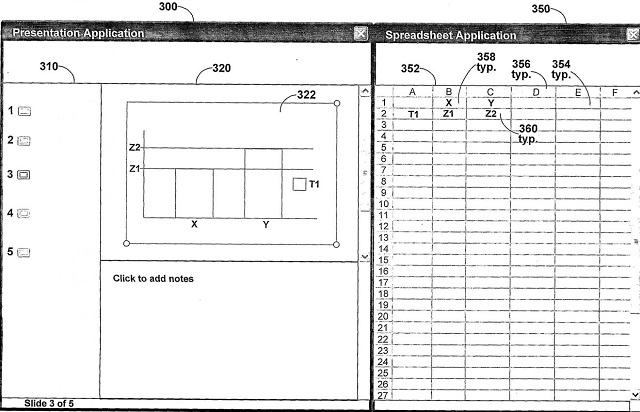 receiving (602) a user action associated with the chart;

if it is determined that a spreadsheet is not needed, handling (606) the user action without accessing the chart data provided by the spreadsheet document;

if it is determined that a spreadsheet is needed,

generating (612, 614) a link between the host application and the spreadsheet application;

sending (616) the user action to the spreadsheet application;

determining (618) whether chart data changes; and

determining (622) whether an update to the chart is required based on the changes, and if so, requesting (624) an update of the chart data from the spreadsheet application.

The first-instance examining division had refused the application for lack of inventive step and added subject-matter.

On appeal, the board based its patentability assessment on prior art document D5. According to the board, one difference over D3 was the following:

It was common ground that the application did not explicitly explain the nature and purpose of this difference. So the appellant tried to infer why the difference was particularly beneficial compared to the prior art:

Concerning the main distinguishing feature A, the appellant agreed that the application did not explicitly discuss operations performed in the invisible mode. However, he argued that the skilled person would infer from description page 10, lines 28 to 31 that actions performed in the invisible mode were "uni-directional" actions which did not require the user to change the chart data or to interact therewith. It would be clear to the skilled person that straightforward examples of such actions were changing color themes of the chart or the chart's font size. The skilled person would also infer from the description that these uni-directional actions were triggered by predefined keyword shortcuts. Furthermore, performing the actions in the invisible mode contributed to saving computer and memory resources, as less information was displayed. Hence, in the appellant's opinion the objective technical problem was "how to save computer and memory resources"

The appellant argued further that recognising that certain actions could be performed in an invisible mode in order to save computer resources was not obvious over D5, as D5 did not provide any hint in this direction. In the absence of such a hint, the skilled person starting at D5 would perform all chart-related spreadsheet actions in the visible mode shown in Figure 4.

But the board was not persuaded by these inference arguments:

The Board considers that the problem of saving resources is in this case too general and speculative. The amount of consumed resources depends, in both visible and invisible mode, on the actions' nature and the manner in which they are processed rather than merely on the decision to perform actions visibly or invisibly for the user.

The fact that neither the claim nor the description discuss actions performed invisibly to the users in positive terms poses a difficulty in formulating the objective technical problem. As long as it is not clear what these actions are and what processing ensues, their effect cannot be determined. However, the identification of an effect produced by novel features is essential in the problem and solution approach, because such an effect provides basis for the formulation of the objective technical problem.

Furthermore, the problem cannot be based on the negatively formulated effect of enabling actions whose handling does not require the user to interact with the chart data. The reason is that such a problem comprises a pointer to the offered solution. And it is even less appropriate to include in the problem that certain spreadsheet actions should be performed invisibly for the user.

The board then went on and formulated the objective technical problem itself, but found the claimed solution to this problem to be obvious:

In the Board's view, one credible problem follows from the appellant's inferred feature that the actions that result in invisible processes must be triggered by predefined keyword shortcuts. Providing such shortcuts that then enable triggering spreadsheet actions increases user friendliness. Thus the Board bases the objective technical problem on this effect along the lines of "how to increase user friendliness of the system of D5". The skilled person confronted with this problem and referring to his common general knowledge would consider enhancing the host application by exposing required actions, also chart-related actions, by means of predefined shortcuts. The Board judges that using keyword shortcuts invoking applications in order to perform preprogrammed actions was commonplace in the field of human-computer interaction and formed part of the common general knowledge at the priority date. The shortcuts were employed to expedite operations by reducing input sequences to a keystroke; hence the term "shortcut".

The skilled person would immediately recognise that shortcuts would be most useful for actions that do not require any user input. For such actions, it is also not necessary to notify the user that the spreadsheet application instance is running, as the user is only interested in the result. Since user-friendliness implies avoiding presenting the user with unnecessary information, refraining from providing visual indication of the performed spreadsheet operations results naturally from the objective technical problem.

The appellant argued that the claimed solution went against the OLE framework of D5 and therefore would not have been considered by the skilled person. However, the Board cannot see why using the OLE facilities should hinder the skilled person from adapting the general teaching of D5 in the above manner (cf. remarks concerning the OLE in point 2.1.1 above)

The Board therefore judges that feature A is obvious.

In the end, the board dismissed the appeal.