European Union: Displaying A Correct Letter Even If User Input Is Imprecise: Technical

Improvements in the user interface of electronic devices are oftentimes right on the borderline of what is technical. This case is interesting because the technical character of the input method was not even questioned by the board of appeal.

Displaying a correct letter even if user input is imprecise is a technical effect.

This European patent application concerns techniques for entering multi-language letters on a portable device. The user may use a touch gesture to input a letter and a symbol, e.g. an accent. The letter and the symbol, e.g. á, é ,í ,ó ,ú, ñ or ü, are then displayed together.

In the prior art mentioned in the patent application, conventional portable devices require the user to generate a long press input for an English letter as shown in the left part of FIG. 1 and then has to generate an input for selecting an accent symbol in a pop-up window that is generated in response to the long press: 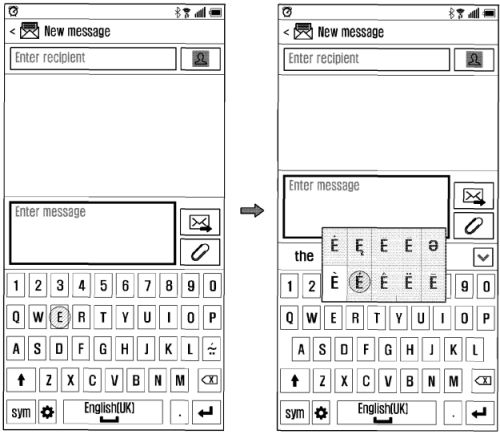 Accordingly, a keypad included in a conventional portable terminal includes only the alphabet, and additional keys for letters including symbols are not assigned to the keypad. Therefore, a user has to generate inputs twice in order to enter a letter including an accent symbol.

The invention sets out to overcome this inconvenience with a multi-language input method for displaying a letter including a symbol in response to one touch and a touch gesture consecutive to the touch.

The first-instance examining division had refused the application for lack of inventive step.

On appeal, the board based its patentability assessment on prior art document D3, just in the first instance. According to both the board and the appellant, one difference over D3 was the step of:

(m2) determining whether a letter corresponding to the touch input is combined with a symbol; if not, no symbol is identified or displayed.

The board acknowledged not only one, but two technical effects achieved by this feature:

Feature (m2) leads to the technical effects of displaying a correct letter even if user input is imprecise and reducing the computational load.

The objective technical problem is thus how to modify D3's device to achieve these effects.

The person skilled in the art of multi-language input methods (description, page 1, lines 7 to 9; D3, column 5, lines 38 to 40) is aware that not all letters of an alphabet can be combined with an "umlaut" or "accent" symbol. To reduce the computational load, it is clear that if the specific mark (e.g. a slash) is drawn on a character (D3, column 5, lines 45 to 47) which cannot be combined with a symbol, there is no need to identify the symbol. Hence, the skilled person would be motivated to avoid the identification, and consequently the displaying, of a symbol.

Hence, feature (m2) does not contribute towards any inventive step.