Germany: Method Of Providing A User Interface For Controlling A System: Technical

Providing an improved and more flexible user input interface for controlling a system is a technical problem.

The European patent application concerns a method and a system for providing a user interface for controlling the system relative to the responsiveness of the user action. In particular, the invention provides a sensor for observing a body and a perceptible user interface. Based on the rate of displacement of the body, the underlying system is controlled.

Therefore, the rate of displacement determines the user interface of the functionality of the system. 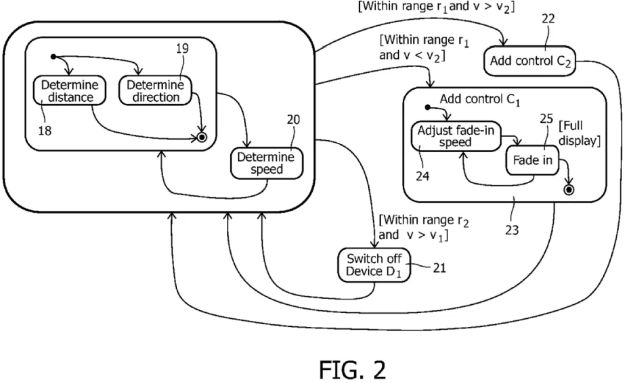 Method of providing a user interface for controlling a system (1;27), including the steps of:

observing a presence of a body or body part of a user in a certain environment of a sensor device (6,14-17;30);

and being characterized by further comprising:

The first-instance Examining division had refused the application for lack of novelty. The cited prior art document disclosed a video game where the user could control the character by moving the body.

On appeal, the Board agreed with the appellant that the cited document only disclosed using the displacement of the body to interact with the user interface (i.e., the character on-screen) and not to provide a part of the user interface associated with the functionality of controlling the system. Therefore, the claim was considered novel.

When deciding whether the distinguishing feature was technical, the Board provided the following reasoning:

The technical effect of the essential differences detailed above between the subject-matter of claim 1 and the disclosure of D1 is that a part of the user interface provides different functionalities for controlling the system depending on the rate of displacement of a user's body part towards the user interface.

The objective technical problem can thus be formulated, as proposed by the appellant, as how to provide an improved and more flexible user input interface for controlling a system.