Cyprus: Tax Incentives For Expatriate And High Net Worth Individuals Relocating To Cyprus

In light of the shifting international tax landscape, businesses are focusing on establishing economic substance, cautiously considering the jurisdictions they operate from in order to safeguard their interests.

In addition to the above, Cyprus offers a number of personal tax incentives that aim to attract multinational companies to relocate key personnel to perform their duties from Cyprus. The tax incentives also appeal to high-net-worth individuals who are willing to relocate to Cyprus.

Below, we present an overview of Cyprus' personal tax regime as well as the key tax benefits provided to expatriate individuals relocating to Cyprus.

The main types of direct taxes applicable to an individual in Cyprus are:

An individual working in Cyprus is also subject to social insurance and other contributions.

An individual is subject to income tax and/ or special defence contribution depending on his/her tax residency and domicile status, a concept introduced in the Cyprus tax law in July 2015.

An individual who spends more than 183 days in Cyprus is a tax resident of Cyprus. As from 1 January 2017 an individual can be a tax resident of Cyprus even if he/she spends less than or equal to 183 days in Cyprus provided that he/she satisfies all of the following conditions within the same tax year (1 January – 31 December):

If the employment/business or holding of an office is terminated during the year, then the individual would cease to be considered a Cyprus tax resident for that tax year.

A tax resident individual who is non-domiciled in Cyprus is exempt from tax on dividend and interest income.

A non-Cypriot tax resident individual is subject to income tax on income accruing or arising only from sources within Cyprus and is exempt from tax on dividend and interest income.

Income tax exemptions for taking up employment in Cyprus

An expatriate individual relocating to Cyprus (irrespective of his/her tax residency or domicile status) is eligible to one of the following income tax exemptions on employment income:

Remuneration from rendering services outside Cyprus to a non-resident employer or to an overseas permanent establishment of a resident employer for more than 90 days in a tax year is exempt from income tax.

No tax on dividend and interest income

A non-domiciled individual, irrespective of his/her tax residency status is exempt from tax on dividend and interest income.

No tax on gains arising from the disposal of investments

Any gains arising from the disposal of shares, bonds and other similar financial instruments (including options and rights thereon) are exempt from tax.

Cyprus is a party to more than 55 tax treaties that provide for nil or reduced withholding tax rates on dividends, interest, royalties and pensions received from abroad.

Any lump sum received as a retirement gratuity is exempt from tax.

Furthermore, a Cypriot tax resident individual receiving pension income from services rendered abroad may choose to be taxed at a flat rate of 5%, on amounts exceeding €3.420 per annum.

Gains arising from the disposal of non- Cypriot real estate are exempt from CGT.

There is no estate duty, wealth tax, gift tax or inheritance tax in Cyprus.

To numerically demonstrate the tax benefits available to qualifying expatriate individuals relocating to Cyprus, we calculate below the Cypriot tax liability of a Cypriot tax resident non-domiciled individual who takes up employment in Cyprus, earns income from investment sources and realizes a capital gain on the sale of real estate situated overseas. 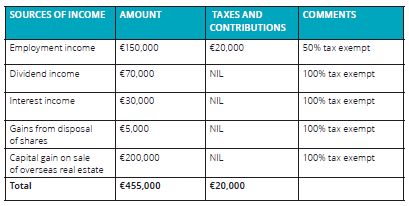 An individual with the above profile would be liable to total Cypriot taxes and contributions of approximately €20,000 arising on his/her employment income. His/her investment income would be fully exempt from tax in Cyprus.

Where an individual is considering relocating to Cyprus, bespoke advice should be obtained on both the Cypriot as well as the cross border tax implications of such relocation.