Cyprus: The Russian "Deoffshorisation" Law – The Cyprus Perspective Analysis Of The Possible Actions To Be Taken.

by Charalambos Meivatzis
Kinanis LLC
Your LinkedIn Connections
with the authors

As of 1st January 2015, the new amendments to the Russian Federation Tax Code will take effect. The new rules introduced can be broken down to four main pillars: 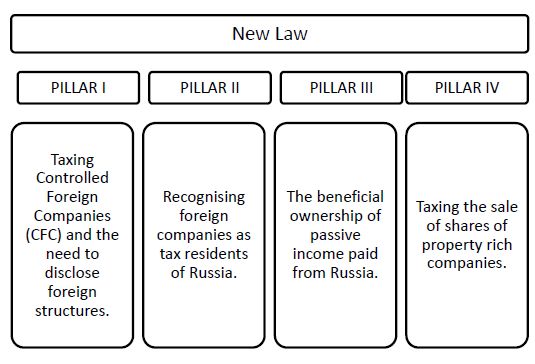 The purpose of this report is not to provide an in-depth analysis of the new Law in Russia as we believe that the law has been adequately analysed already by Russian law and accounting firms.

What we try to provide is a more practical approach by analysing also the options available to investors doing business through Cyprus and indicate the actions we believe are necessary to be taken for each possible option.

B. The Four Pillars – Brief Analysis of the Law

I. Taxing Controlled Foreign Companies (CFC) and the need to disclose foreign structures.

The new law places an obligation to Russian tax residents to disclose by notifying the Tax Authorities, of any direct or indirect holding in foreign entities that exceeds 25% or 10% if such foreign entity is by more than 50% controlled collectively by Russian Tax residents. For 2015 there is a relaxation in the law and the percentage of control is set at 50% during this one year transition period.

Further the new law, generally considers a foreign entity as a CFC if:

The law provides for some exemptions, however, once a company will be considered as a CFC, the controlling person in Russia will be liable for taxation on the undistributed profits of the CFC at a rate of 20% for corporations and 13% for individuals (instead of 9% which is the normal taxation rate of dividends).

Please refer to the table below for the possible options available to investors doing business through Cyprus and the actions necessary in order to implement the chosen strategy. 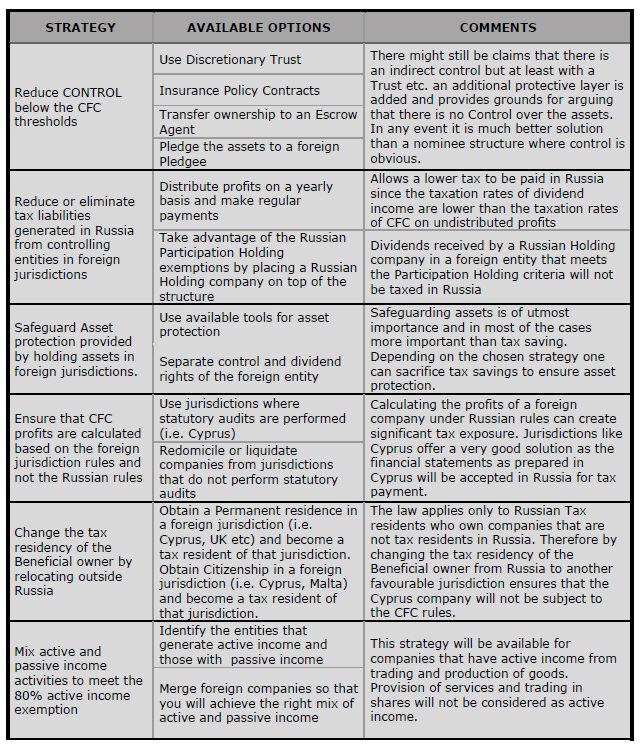 A foreign company may be recognised as a Tax Resident of Russia if the effective place of management of the company is considered to be in Russia.

If a foreign company will be considered as a tax resident of Russia, then it will need to pay taxes on its worldwide income, in Russia. Therefore, if the effective management and control of a Cyprus company will regarded as being performed in Russia, then this Cyprus Company will be taxed in Russia for the whole of its income. The law has specific and strict provisions on how this will be decided. Factors that will shift the effective management and control of a foreign company to Russia include:

Please refer to the table below for the possible options available to investors doing business through Cyprus and the actions necessary in order to implement the chosen strategy. 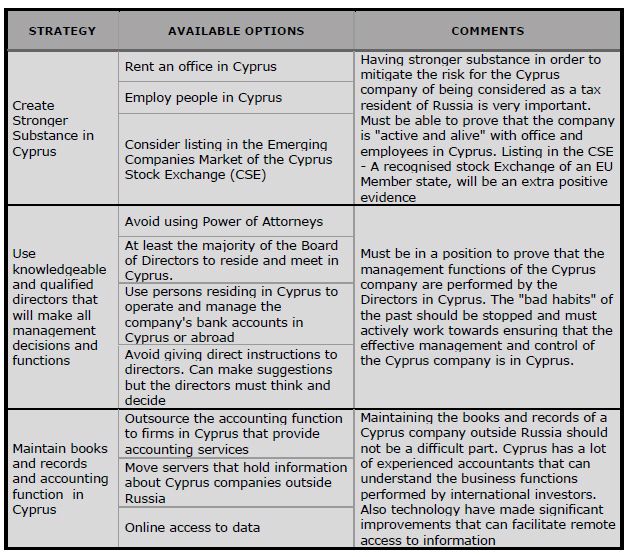 III. The beneficial ownership of passive income paid from Russia.

The new law introduces the concept of beneficial ownership of the passive income paid from Russia to foreign entities in conjunction with the applicability of the double tax treaties in such situations.

If the direct recipient of the income, i.e. the Cyprus Company, has limited powers regarding its disposal and basically acts as an intermediary which will directly or indirectly transfer substantially all of this income to another person, i.e. a BVI company, then there is a risk that the double tax treaty between Cyprus and Russia will not apply.

In effect the new legislation tries to tackle what are commonly known as backto- back financing, royalties and dividend structures that were very popular in the past. Please refer to the table below for the possible options available to investors doing business in Cyprus and the actions necessary in order to implement the chosen strategy. 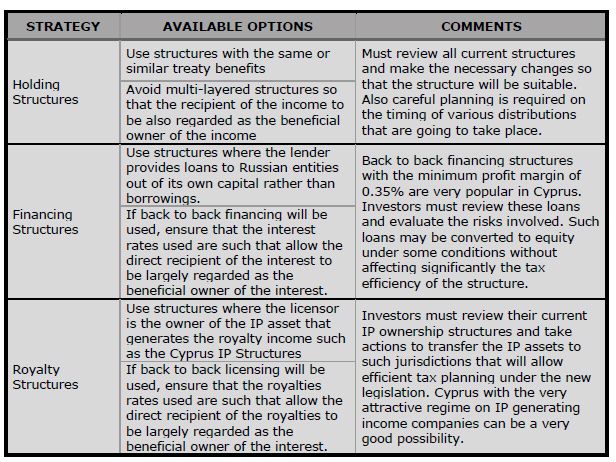 IV. Taxing the profit from sale of shares of property-rich companies in Russia.

Up to now, the shares of companies that owned immovable property in Russia regarded as "movable property" and therefore taxed at the jurisdiction of the seller.

For example, if a Cyprus company sold the shares of a Russian Company that held a significant number of immovable property in Russia, then under the treaty the right to tax this transaction was with Cyprus which was the jurisdiction of the seller. The new protocol of the Double Tax Treaty signed between Cyprus and Russia addressed this issue and from 2017, under the new treaty, such disposals would be taxed in Russia, i.e. the jurisdiction where the immovable property is situated.

In effect the new legislation incorporates this provision, introduced recently to various double tax treaties, into the local legislation.

It is worth mentioning that both the local legislation as well as the double tax treaty between Cyprus and Russia exempts the sale of shares of listed property-rich companies in a recognised stock exchange from the above provisions.

The Cyprus Stock Exchange, and in particular the Emerging Companies Market (ECM) can be a good Market for listing Russian or other foreign companies that own property in Russia. The flexible legal system, the manageable administrative burden and the low costs involved in listing in the ECM synthesise the right environment for such listings.

Taking into consideration the provisions of the new legislation it is evident that there is no single golden solution to all structures. Each situation should be assessed separately in order to decide the optimum strategy to be followed by each investor. As it is evident from the above tables there are various possible strategies and solutions that can be followed, each one with its own risks, advantages and disadvantages. Investors must calmly consider the options available and conclude to the right strategy to be followed.

D. HOW KINANIS LLC CAN ASSIST YOU