by Graham B.R. Collis , Marcello Ausenda and Niel Jones
Conyers
Your LinkedIn Connections
with the authors

This edition of the Bermuda Public Companies Update summarises significant transactions involving Bermuda companies on the New York Stock Exchange and Nasdaq in the second half of 2020.

2020 was characterised by the Covid-19 pandemic and yet, despite its continuing impact, global capital markets surged to all-time highs in the second half of the year. Growth in the tech sector led the way to a record US$1.1 trillion of activity for the year, while the retail and consumer sectors suffered the biggest losses. Predictably, global debt markets were busy as well. During the first nine months of 2020, issuances passed a record US$8 trillion.

M&A activity came roaring back from the lows of March. There were US$496 billion in mega transactions (over US$5 billion) recorded in Q3 – double the value recorded in Q2 – according to Refinitiv. In fact, eight of the 10 biggest deals in terms of value were announced in the second half of the year, including S&P Global Inc.'s US$44 billion proposed acquisition of Bermuda company IHS Markit Ltd.

The most significant event in a busy half year for Bermuda public companies was the announcement of IHS Markit Ltd.'s merger agreement with S&P Global Inc., which we discuss in more detail on page 2.

Other activity included a number of take-privates and share/notes offerings, as the impact of Covid-19 sent many companies to the markets to raise funds. Over US$16.5 billion was raised by Bermuda companies on the NYSE and Nasdaq in a variety of transactions. Sizeable equity and bond offerings included:

The total number of Bermuda companies listed on the major US exchanges dropped slightly, as a result of several take-privates, including: 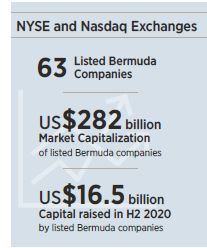 There was one Bermuda company IPO in the period – IBEX Limited, a provider of outsourced customer service products and services, raised US$90.48 million in its IPO on the Nasdaq Global Market in August, trading under the ticker IBEX.

On 29 November, 2020 IHS Markit Ltd. (NYSE: INFO) and S&P Global Inc. (NYSE: SPGI) entered into an agreement to merge in an all-stock transaction which was the biggest M&A deal announced in 2020.

IHS Markit, which tracks financial market data, is the largest listed Bermuda company by some margin. Worth about US$39.5 billion, the group has 14,900 employees and generated almost US$4.3 billion in revenue for the 2020 financial year. Its story is one of impressive growth that demonstrates the benefits of Bermuda as an ideal jurisdiction from which to take a company public and then foster its development. 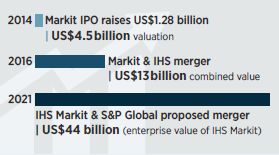 Since 2014 Conyers has advised IHS Markit on the Bermuda law aspects of its IPO, secondary offerings, debt offerings, credit facilities, accelerated share repurchases, corporate governance and its mergers with IHS and now with S&P Global.

SPACs on the Rise

Special Purpose Acquisition Companies (SPACs) have risen to new heights in the past year as an alternative to traditional IPOs. More than US$80 billion worth of SPAC IPOs were recorded in 2020, up from US$13 billion in 2019. July saw a record-setting US$4 billion SPAC IPO by Pershing Square Capital Management's Bill Ackman.

Amidst all the market disruption caused by Covid-19, investors and businesses alike were drawn to the relative safety of these so called "blank-check companies," which offer significant amounts of ready capital, a clear timeframe and confidence in experienced management teams.

SPACs are unique in that they are incorporated with no underlying business. They raise capital through an IPO for a yet-unknown acquisition target. The capital is typically placed in trust and deployed once the target is identified, usually through a merger acquisition in the following one to three years. Given the inherent risk associated with investing in a company with no operations of its own, a number of investor protections are provided for in the structure.

Bermuda is the ideal place in which to domicile a SPAC. It offers tax neutrality, stability, and a regulatory regime that is based largely on English common law. Bermuda has both flexibility and agility when it comes to the establishment, structuring and operation of SPACs.