Most Popular:  Article Bermuda, August 2019
To print this article, all you need is to be registered or login on Mondaq.com.

In the latest edition of our Bermuda Public Companies Update we recap significant transactions involving Bermuda public companies over the period H1 2019.

The first half of 2019 saw a notable slow-down in global market activity from the same period last year. Capital raised in the global IPO market fell by 37%, with volume down 34% on last year. A total of US$69.8 billion was raised across 514 IPO deals. In contrast, North America was the only region to show an increase in capital raised, up 13%. The US domestic IPO market rebounded in early 2019 after a slow end to last year. H1 2019 saw a parade of high-value tech companies go public in the US, and despite the Uber and Lyft IPOs, investor demand remains generally robust, though trading has been volatile.

Similarly, while global M&A volume has been underwhelming in H1 2019, US M&A activity has remained high with seven of the top ten deals of the year being domestic US deals.

Market activity for Bermuda public companies listed on the NYSE and Nasdaq has generally followed the US trend, with several M&A transactions announced and/or completed, particularly in the finance and technology sectors. Although there have been no Bermuda company IPOs on US exchanges so far in 2019 (compared to two in H1 2018) there have been two direct listings of Bermuda companies, one on the NYSE and one on Nasdaq:

There have been a large number of fixed income and secondary offerings in the first half of this year, including two tranches of senior unsecured notes offered by IHS Markit in April for a total value of US$1 billion.

M&A activity over the period included the acquisition by Bermuda-based Invesco Ltd. of Oppenheimer Funds Inc. for US$5.7 billion. Conyers advised Massachusetts Mutual Life Insurance Company as seller on the deal.

We have included details of the market activity referenced above in this edition of our update, along with statistical information about the Bermuda public companies market, which we hope will be of interest to our legal colleagues, clients and Bermuda market followers. 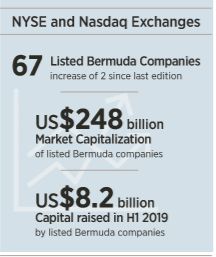 In June 2019 Nordic American Offshore Ltd. announced the change of its company name to Hermitage Offshore Services Ltd. It now trades on the NYSE under its new name and the ticker symbol "PSV".

IHS Markit Ltd., the largest US listed Bermuda company by market capitalization, transferred its common share listing from the Nasdaq Global Select Market to the NYSE on 2 July, 2019. IHS Markit retains its current "INFO" ticker symbol on the NYSE.

The listing of Bermuda shipping company Flex LNG Ltd. on the New York Stock Exchange in June may be a hint of better times to come for the maritime and offshore oil and gas industries. Flex LNG, controlled by Norwegian billionaire John Fredriksen, is an emerging player in the liquified natural gas shipping business.

Since 2014, the shipping sector has experienced considerable challenges accessing the equity capital markets. Lack of investor appetite means there has not been a US IPO by a shipping company since June 2015. Flex LNG used a direct listing – in which the shares begin trading but no new capital is raised – as an alternative way to improve liquidity. In fact, Flex LNG is the third shipping company to directly list on a major US exchange this year. Flex LNG's CEO Oystein Kalleklev told delegates at a recent Marine Money conference in New York that the direct listing process was relatively easy and offered speed and cost advantages.

Flex LNG Ltd. was already listed on the Oslo stock exchange and will now be dual-listed. The company is not the only Fredriksen-backed shipping entity to graduate from Oslo to New York to source deeper pools of capital – others that started on the Oslo Børs include Frontline (NYSE:FRO) and Golden Ocean (Nasdaq:GOGL). The last six years have seen several shipping and shipping-related companies incorporate in Bermuda and go on to list on the Oslo Stock Exchange, including Avance Gas, Borr Drilling, BW LPG, Odfjell Drilling and Team Tankers International. The Norwegian over-the-counter market (OTC) has also proved a popular way to access equity, used by both GoodBulk and 2020 Tankers. A New York listing may yet be in the future for some of these companies, should market conditions improve.

Other notable developments in the Bermuda shipping sector include moves by two companies to streamline and focus on core businesses. Bermuda headquartered Teekay Corporation (NYSE:TK) completed the sale of its interests in Teekay Offshore to Brookfield Business Partners in May. The corporation stated that the divestment of its remaining interests in Teekay Offshore was aligned with its strategy to simplify and focus on its core gas and tanker businesses: Teekay LNG Partners LP (NYSE:TGP) and Teekay Tankers (NYSE:TNK). Also in May, Golar LNG Limited (Nasdaq:GLNG) announced the decision to spin off its LNG carrier business and focus on infrastructure for floating liquefied natural gas and downstream assets. 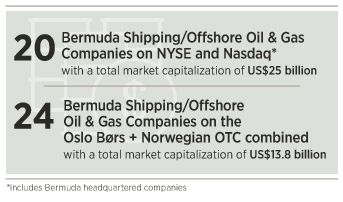