On June 2nd, 2014, President Michelle Bachelet introduced to Congress a bill that modified Law No. 19,496 Consumer Protection Act – Bulletin No. 9369-03 – (the "Bill"). This Bill is known as "Bill of Strengthening of the National Consumers Bureau ("SERNAC")" due to the main modifications that would be implemented to the current Law No. 19,496 Consumer Protection Act ("CPA"); which tends to strengthen SERNAC's institutionality, granting it more abilities.

On October 17th, 2017, the Bill was endorsed by Congress. After been approved by the Senate House, the Bill was referred to the House of Representatives for its third constitutional stage.

Hereunder, an outline on the Bill's principal guidelines and its main changes to the current law:

I.- NEW ABILITIES OF SERNAC

The Bill aims to significantly increase SERNAC's abilities regarding supervision, sanctioning, interpretation of the law, regulation and propositive abilities which will be regulated by different agencies of SERNAC which will work independently from one another:

II.- INCREASE ON FINES AND DETERMINATION OF FINES

The Bill proposes to significantly increase the fines established by the CPA. Some of the most relevant modifications are: 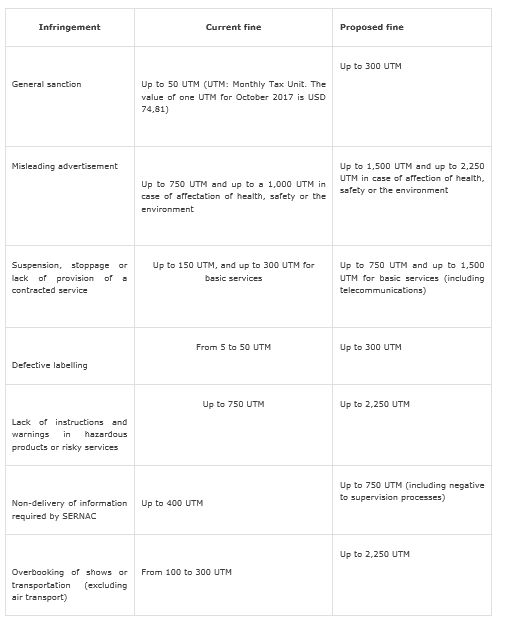 Additionally, the Bill establishes a system to determine the amount of the fines, which binds both judge and SERNAC. The new determination of fines includes several mitigating and aggravating circumstances which, after being weighted by the judge, must be indicated as a ground in the judicial ruling at the moment of determining the applicable fine:

a) Mitigating circumstances (decrease on the maximum amount of the fine):

b) Aggravating circumstances (increase on the minimum amount of the fine):

The Bill contemplates a series of measures which aim to benefit SSBs1 against potential braches of the CPA.

(i) Determination of fines: In the proceedings carried before SERNAC, the first imposed fine will be reduced in a 70%. Also, in collective trials, in case the fine is applied considering each consumer affected, the limit of 30% of the products or services' sales, which are the subject of infraction, is reduced to a 10%.

(ii) Alternative sanction in procedures before SERNAC: The fine will be replaced by the obligation to attend courses on the rights and duties of consumers, instructed by SERNAC.

IV.- INCREASE ON THE STATUTES OF LIMITATIONS

Also, regarding the statute of limitations of civil actions (damage compensation), the Bill expressly establishes that the general rules of the Civil Code will apply (5 years for a contractual obligation and 4 years if there is no contract).

In other words, the Bill comes to clarify that only the infringement action, regulated by the CPA, prescribes in 2 years and not the civil action (as sometimes was interpreted by the Courts). Thus, even when the infringement action has prescribed, a claim, in consumer protection regulation, can still be filed through the pursuing of a civil damage compensation action, instead of exercising both actions jointly, as it is the general rule.

V.- DIRECT AND AUTOMATIC COMPENSATION FOR THE SUSPENSION OF BASIC SERVICES

In case the suspension, stoppage or unjustified lack of provision of a contracted service (such as water service, gas, sewage, electric energy, telecommunications, phone service or removal of garbage, residues or toxic elements) the Bill contemplates the obligation of the supplier to compensate the affected consumer for each day without provision of the contracted service. The compensation amount will be equal to 10 times the average daily value billed the month previous to the suspension. This compensation will be materialized by discounting the respective amount on the next billing.

To calculate the appropriate compensation, every time the service's provision stops for 4 continuous hours or more within a 24 hours period, it will be understood there was an entire day without provision. In other cases (basic services supplied periodically, such as the removal of garbage) the calculation will be performed proportionally to the period of time in which the services were not provided.

This direct and automatic reparation will only proceed when special regulations do not contemplate a compensation such as this, notwithstanding the consumer's right to a timely and suitable compensation of all material and non-material damages.

VI.- MODIFICATIONS TO THE PROCEEDINGS OF THE CPA

Local Courthouses maintain their jurisdiction to judge cases in which consumers, individually, file an infractional and/or damage claim against the supplier.  Nevertheless, the Bill modifies the criteria in which these Local Courthouses will be competent.

This proceeding could be initiated directly by SERNAC, or through a claim filed by a consumer. SERNAC will inform the supplier of the alleged infringement, for it to propose solutions. In case the consumer or SERNAC do not accept the supplier's proposal, there will be a conciliation hearing before SERNAC, which may be waived by the consumer, confirming his/her claim. Accordingly, the minute that declares the conciliation as failed or that confirms the claim, may originate a sanctioning proceeding.

The sanctioning proceeding is substantiated by the corresponding Regional Director of SERNAC, and will be in charge of an attorney of SERNAC (instructor).

This proceeding will be initiated by a resolution providing the supplier with a term of 10 days in order to present its evidence and formulate its defenses (any evidentiary mean is accepted).

It will be possible to file an illegality claim against such resolution before the competent Local Courthouse placed in the domicile of the consumer, within a term of 10 days counted from the notification of the resolution. The resolution that solves the claim will be appealable before the Court of Appeals only in cases of an amount over 25 UTM (app. USD 1,872).

The Bill contemplates, on a precautionary measures subject, that in a certain case and only once the claim has been admitted to pendency, the judge may order that the supplier provisionally stops charging the amounts which are been questioned on trial.

On the other hand, concerning an indemnifying subject, one of the main modifications this Bill incorporates, is the possibility that consumers request compensation for non-material damages in collective trials, which is currently prohibited by the CPA. Non-material damages reparations will be judicially determined in a minimum common amount, which will correspond to the minimum affectation suffered by all consumers for the same infraction. To facilitate the judicial determination of this amount SERNAC will be in charge of making available to consumers a fast and expeditious registration which will allow them to invoke this determination mechanism.

In case consumers consider their affection exceeds the minimum common amount, they can pursue the amount's difference in a latter trial before the same Court that ruled in the class action or, before the competent Local Courthouse, according to the general rules, to the consumer choice. Notwithstanding the above, the supplier has the ability to propose, during the entire prior procedure, a non-material damage reparation to the consumer or SERNAC. In order to make such proposal the supplier can divide consumers into groups and sub-groups.

The Bill also contemplates the judge's ability to raise the reparation amount in a 25% in case one of the aggravating circumstances concurs.

Finally, regarding the imposition of fines, the Bill contemplates the ability to apply a fine for each consumer affected in case the nature of the infraction allows it, with the following limitations: The fine cannot exceed 30% of the products and services' sales that are object of the infraction, during the time period in which the infraction took place (this percentage is reduced to a 10% in case the supplier is a SSBS), or the double of the economic profit obtained as a result of the infraction.

Nonetheless, the Bill also contemplates, as an absolute limit to fines applicable on collective trials, an amount that can never go over 45,000 UTA

This is a new procedure incorporated in the reform of the law, characterized for being an administrative special procedure regulated by an independent and specialized sub-direction of SERNAC, which comes to be the legal consecration of what is currently known as "collective mediation". This procedure can only begin while no class actions has been filed based on to the same facts. Once the proceeding began no class actions can be filed concerning the same facts until the voluntary procedure fails. Also, this procedure can be initiated by SERNAC or through an individual complaint by a Consumer Association.

The duration of this voluntary procedure cannot take longer than 3 months, renewable once for the same time. If within this term no agreement is reached, the voluntary procedure will be understood as failed. Additionally, both parties, at any moment of the procedure, can manifest their intention to no longer continue participating.

In case the procedure fails SERNAC will not be able to present, in a later collective trial, the documents that were given by the supplier, unless they could be accessed through different means. Also, there is a general duty of reserve from SERNAC's public officials that participated in this procedure which, when breached, criminal penalties may apply.

Currently, the CPA is understood as a law of general application and supplementary to the rest of the protective sectorial norms.

Notwithstanding the above, SERNAC can additionally sanction the same supplier when the first infraction did not consider the infringement of the rights of the consumers.