Chile: News On The Bill Regarding The Strengthening Of SERNAC

Currently, this bill is in its second constitutional stage of processing before the Senate, pending the publication of the second report of the Constitution, Legislation, Justice and Regulation Commission.

The president of the aforementioned commission has stated that there is an agreement with the Executive branch in order to finish the processing of certain bills which are high priority for the Government, before the end of the legislative year (January 2017). The bill for the modification of the CPA is among these bills. According to said agreement, on December 14, 2016, the Government instructed sum urgency for this bill1.

Please find a summary of the main lines and modifications contained in the bill herein:

I. NEW AUTHORITIES OF SERNAC

The bill aims to significantly increase the authority of the National Consumers Bureau ("SERNAC" for its Spanish acronym) regarding supervision, sanctioning, regulation and interpretion of the law.

The bill sets forth the possibility of filing an illegality claim against said proposals before the Court of Appeals of Santiago.

The bill proposes a significant increase In the fines established by the CPA. Some of the most relevant modifications are: 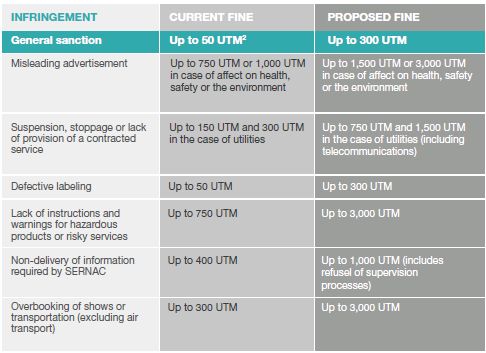 Additionally, the bill establishes a system for the determination of the amount of the fines, applicable both to judges and to SERNAC.

This new fine determination system includes several mitigating and aggravating circumstances in order to delimit the amount of the applicable fines.

In cases of an unjustified suspension of utility services (water, gas, sewer, electricity, telecommunications, telephone or garbage collection), the bill sets forth the obligation of the supplier to compensate the affected consumers for each day in which the service was unavailable. This compensation (punitive damage) is set on a daily basis and its amount shall be equivalent to the fee charged for the preceeding month, with a maximum of 12 days. According to the bill, it shall be understood that the service has been suspended for a day each time it is interrupted for four or more continuous hours.

The bill establishes a series of measures that aim to benefit SSBs in case of potential breaches to the CPA, lowering the standard of the law in these cases. This less stringent system consists of the following measures:

V. MODIFICATIONS TO THE PROCEEDINGS OF THE CPA

Local Courthouses maintain their jurisdiction to judge cases in which consumers, individually, file an infraction and/or damages claim against the supplier.

Nevertheless, there are some new aspects incorporated by the bill, among which it is possible to highlight: (i) consumers must always be represented by an attorney; and (ii) the criteria for determining the competence of the court is limited to the domicile of the consumer or the supplier, at the choice of the former

This proceeding may be initiated directly by SERNAC, or through a claim filed by a consumer. SERNAC will inform the supplier of the alleged infringement, and reguest that the supplier propose a solution. In case the consumer or SERNAC do not accept the supplier's proposal, or if the supplier does not make any proposal for solution, there will be a conciliation hearing before SERNAC, which may be waived by the consumer, confirming his claim. Accordingly, the minute that declares the conciliation as failed or that confirms the claim may originate a sanctioning proceeding.

The sanctioning proceeding is substantiated by the corresponding Regional Director of SERNAC, and will be overseen by an attorney from SERNAC (instructor). This proceeding will be initiated by a resolution providing the supplier with a term of ten days in order to present its evidence and formulate its defenses (any evidentiary means is accepted).

It will be possible to file an illegality claim against such resolutions before the Local Courthouse with jurisdiction in the domicile of the consumer, within a term of ten days. Also, the resolution that solves the claim will be appealable before the Court of Appeals only in cases of an amount over 25 UTM (app. USD 1,700).

One of the main modifications introduced by the bill is the possibility for consumers to request moral damages in this type of proceeding, which is currently excluded by the CPA.

Another important innovation of the bill is that, in qualified cases, and only once the claim has been declared admissible, the judge may order the supplier to provisionally cease collection of any charges questioned by the consumer, as a protective remedy.

The bill also establishes that the court shall have the ability to impose a fine for each affected consumer in case the nature of the infringement justifies it, within the limitations set forth in the law (the total amount of the fines may not exceed 30% of the sales of the line of products or the service subject to the sanction during the period in which it lasted, or double the economic benefit resulting from the infringement).

This new proceeding established in the bill, is a special administrative sanctioning proceeding in charge of a specialized and independent unit of SERNAC.

This proceeding may be initiated by SERNAC or through a claim filed by consumers. The duration of this mediation proceeding shall not exceed three months, extendable only once, for an additional three-month period. If an agreement is not reached within such term, the mediation will be considered as failed. Additionally, the parties may express their intention not to continue with this proceeding at any stage of the mediation.

The bill increases the statute of limitations for consumers or SERNAC to file an infractional claim against the supplier, from six months to two years. This new term is counted from the time in which the infringing conduct ceased.

On the other hand, regarding civil actions (damages), the bill provides that the statute of limitations set forth in the Civil Code will apply (five years for contractual liability and four years for torts).

1 Sum urgency means that the corresponding chamber of Congress, in this case the Senate, has 15 days to dispatch a bill.