China: Examining The Challenges Of Obtaining A Sound Trademark In China

There is little doubt that sound trademarks have proven to provide great commercial value in the era of rapid communication of information. As of 2021, China's trademark law has protected sound trademarks for nearly seven years, though the challenges of obtaining one continues to elicit wider discussion.

According to statistics, by the end of January 2021, 928 sound trademarks have been formally filed before the China Trademark Office. These sound trademark applications cover all 40 classes of goods and services under the Nice Classification system, except for classes 2, 6, 13, 19 and 22.

From Table 1, it can be noted that the top five classes with more than 60 applications are classes 9, 41, 35, 38 and 42 in turn. It is worth mentioning that at present, most sound trademarks (723, accounting for 77.9% of the total number of applications) are filed by Chinese domestic applicants.

Table 1: Statistical chart of sound trademark applications in China
(as of January 31 2021) 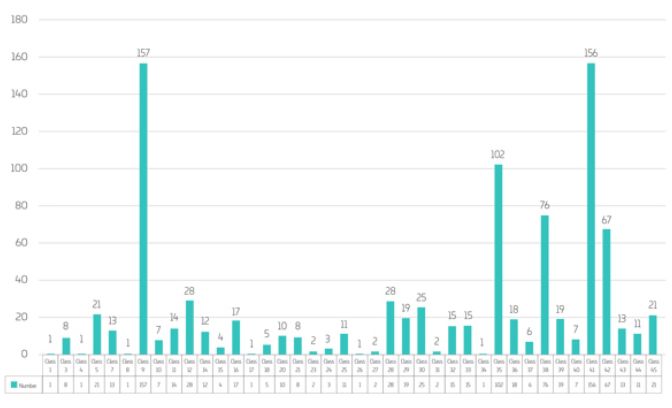 Part VI - Examination of sound trademarks of the Trademark Examination and Adjudication Standard (2016) issued by the China Trademark Office clearly specifies that sound trademarks should adopt the examination standards consistent with visually perceptible trademarks. In addition, it also specifies the form of generalisation and enumeration as "if the sound only directly indicates the content, target-consumer, quality, function, use and other characteristics of the specified goods or services, it should be considered that this sound is devoid of any distinctiveness." Moreover, it is also clearly stipulated that "generally speaking, sound trademarks need to be used for a long time in the market before they could acquire distinctiveness."

In addition, when sound trademark applications come to the substantive examination procedure, the examiner may issue a notification of examination opinion, requiring the applicant to submit requisite evidence of the use of the sound trademark, and to provide a detailed explanation of the circumstances in which the sound trademark has obtained distinctiveness through use. The evidence needs to prove that the primary function of the sound is not sound per se, but to indicate a source of designated goods or services, that is, when the relevant section of the public hears a sound, they can involuntary associate it with a specific source.

The question arises about how to understand sound that only directly represents the content, target-consumer, quality, function, use and other characteristics of the specified goods or services, and whether this should be devoid of any distinctiveness.

In this regard, the following two sound trademarks that have been rejected by the trademark office, are taken as examples:

As for sound trademark no.15482982 of "Li Lian GUI Bacon Pancake", it specifically showed that it sung the seven Chinese characters "李-连-贵-熏-肉-大-饼" in the C4/4 music beat with different tones. Therefore, its expression belonged to descriptive phrases that are sung and exhaled only in ordinary intonation or simple melody.

As for sound trademark no.34198632 of "Ding; Zeng; Ka", it played like a continuous single tone auditory effect produced by three different tones and intensities. It may be thought that the auditory effect reflects the mechanical sound of opening the cover, turning the flint wheel, and closing the cover when using a cigarette lighter. Therefore, the expression form of this sound trademark could be considered as a sound that is inevitable or unavoidable in the normal use of goods or the normal provision of services. As a result, the China Trademark Office holds that the two sound trademarks mentioned above are not distinctive enough in the sense of trademark law and thus cannot be registered.

A further query concerns the understanding that sound trademarks need to be used for a long time in the market in order to acquire requisite distinctiveness. First of all, if sound trademarks have just been put into commercial use or have not planned to enter the commercial field, it is difficult to claim that sound trademarks have formed a certain market influence and have a high popularity, so it is impossible to obtain registration. Secondly, with the continuous innovation of modern advertising modes and new media technology, it is not impossible for many sound trademarks to have a certain popularity through a large amount of advertising investment in a very short amount of time. However, the problem is that gaining a certain popularity does not necessarily mean that the sound trademark has the 'identification' and 'distinctiveness' in the sense of trademark law.

In December 2020, Li Jiaqi, a popular live-streaming commerce anchor in China, applied for the sound trademark no.45217353 of "Oh my god, 买它, 买它!", which was later rejected after being examined by the China Trademark Office. It brought back the discussion of the distinctiveness of sound trademark registration and it swiftly became one of the most searched hashtags on the Chinese internet.

This trademark belongs to the type of 'text-call' sound trademark. According to the existing practice of sound trademark examination in China, one should first pay attention to distinguishing whether the calling text or the sound itself plays a real recognition role in the process of use. If the sound trademark only belongs to the form of calling words with ordinary intonation or an extremely simple melody, the words are likely to be impressive and play a role of recognition in the process of use, while the sound is only regarded as the auxiliary background of words, or 'the voice of words'.

Although this kind of sound trademark may only prove to be well-known by the public after long-term or extensive use, it needs to be analysed and judged according to the actual situation whether it is 'voiced words' or sound itself as a trademark used to identify and distinguish the source of goods or services.

As for the sound trademark no.45217353, on the one hand, as stated in the text submitted at the time of filing, the sound "has a strong personal style", and has been widely used for a long time through the form of live-streaming commerce, which has been well known to a certain range of the relevant public. Therefore, as far as sound itself is concerned, it is possible to identify and distinguish the source of goods or services. This still needs to be proved by submitting sufficient evidence of use.

On the other hand, for the text it referring to "Oh my god, 买它, 买它!", the Chinese meaning of the word 'god' in the English part of the trademark is considered to be explicit. According to the existing practice of trademark examination in China, it will still be classified as "obviously a sign harmful to socialist morality or other adverse effects"", so it is forbidden to register and use as a trademark.

For the Chinese part "买它，买它!", which has the meaning of "buy it, buy it!", it only directly indicates the content and purpose of designated service items in class 35, so it has no inherent distinctive characters. In sum, this case suggests that even if the sound in the sound trademark is originally created or first used by the applicant, it cannot be taken for granted that it has distinctiveness as a trademark.

Table 2: Classification statistics of registered sound trademarks in China
(as of January 31 2021)

It can be said that with the development of modern science and technology, in addition to the traditional forms of broadcasting, sound trademarks are becoming more widely spread, more convenient and more impressive through television, mobile phones, mobile terminal devices, internet and other electronic media. By listening to the sound trademarks repeatedly as time goes on, and by continuously strengthening the memory of the voice of the relevant public, the sound generates association and establishes a unique corresponding association with the suppliers of goods or services, and can finally be successfully registered.

This also proves the great value and influence of using information media and its business model for the expansion of sound trademark publicity. This remains worthy of attention and serious treatment by Chinese and foreign applicants who want to obtain a sound trademark registration.

ARTICLE TAGS
China Intellectual Property Trademark
POPULAR ARTICLES ON: Intellectual Property from China
Patent Law in India
Anand & Anand
The Patents Act 1970, along with the Patents Rules 1972, came into force on 20th April 1972, replacing the Indian Patents and Designs Act 1911. The Patents Act was largely based on the recommendations of the Ayyangar Committee Report headed by Justice N. Rajagopala Ayyangar. One of the recommendations was the allowance of only process patents with regard to inventions relating to drugs, medicines, food and chemicals.
INSTA: The power of a prefix - Instagram successfully opposes registration of INSTADATE
Spruson & Ferguson
Businesses should be careful if adopting prefixes or suffixes in their branding which could indicate other trade marks.
Process: Trademark Registration In India
Intepat IP Services Pvt Ltd
Many entrepreneurs do not comprehend the importance of a TM search.
All You Need To Know About "Well-Known Trademarks"
Khurana and Khurana
With coming up of the new Trade Mark Rules 2017, a new procedure has been created that allows the Registrar to proclaim a particular trademark as "well known".
Difference Between Passing Off And Infringement Of The Trade Mark
Khurana and Khurana
A Trade mark may be defined as a lawfully protected abstract, word, symbol, color, mark, slogan or a mixture of those related to an organization or a selected product that differentiates it from the others accessible within the market.
Concept Of Fair Use And Fair Dealing In Copyright
S&A Law Offices
Fair use supports "socially laudable purposes," typically, if not exclusively, involving the use of the copyrighted work by a second author
FREE News Alerts
Sign Up for our free News Alerts - All the latest articles on your chosen topics condensed into a free bi-weekly email.
Register For News Alerts
Article Tags
China Intellectual Property Trademark
Related Articles
Fast Track For Trademarks In China CCPIT Patent & Trademark Law Office
Beijing Intellectual Property Court Targets Malicious Trademark Registration AFD China
China Releases Added Value Data Of Patent-intensive Industries AFD China
China Working To Make IPR Public Services More Convenient, Smarter AFD China
IP In China: Key Cases From 2021 And The Outlook For 2022 Gowling WLG
Mondaq Webinars
UK Construction Law Update: What happened in 2021? What can we expect in 2022?
Charles Russell Speechlys LLP
Webinar London UK
New Legislation Paves the Way for the Future of Aviation
HarleyJames Law
Webinar Nassau Bahamas
More Webinars
Comparative Guides
Cartels
Franchising
International Arbitration
Merger Control
Trademarks
More Guides
Mondaq Advice Centres
Global
Trademarks in SAARC Countries
More MACs