Minister for Financial Services, the Hon. Tara Rivers, spoke at a seminar at the Centre for European Policy Studies (CEPS) in Brussels with Pascal Saint-Amans, Director, OECD Centre for Tax Policy and Administration and Jeppe Kofod, Member of the European Parliament.

Moderated by CEPS' CEO Karel Lannoo, the seminar on Wednesday 23 May was titled 'Towards Fairer Taxation: Is Europe getting the policy mix right?'. CEPS is the leading think tank on European affairs in Brussels, specialising in economic and financial affairs.

Also on Wednesday 23 May, the Minister took part in a roundtable discussion at the European Business Summit entitled 'EU Taxation Policy: Which impact on the EU's attractiveness and competitiveness?'. The European Business Summit is an annual summit of political decision-makers, business leaders, members of academia and civil society. The summit represents the largest such annual gathering in Brussels.

On the topic of ongoing discussions related to the EU's list of non-cooperative jurisdictions for tax purposes, Minister Rivers commented on the issue of 'sufficient economic substance'.

'As evidenced by the variation of substance requirements that exists here among the EU Member States, it is important to note that there is no globally accepted definition of sufficient economic substance', she said.

'We therefore hope that the attempt to develop standards related to sufficient economic substance is truly global; common standards would be desirable. Of course, for these standards to be globally acceptable and applicable, they must take into account different business types and tax systems that exist'.

'Contrary to what some may wish to believe, Cayman's system is not designed for tax structuring purposes because there are no legal mechanisms, such as double tax treaties, free trade zones, or other preferential tax regimes, to encourage shifting of profits or the erosion of the EU tax base'.

'There are no shell companies, no bearer shares, and no numbered accounts. And given the high level of tax transparency which has existed for many years now, the notion that somehow Cayman is a place to hide money is incorrect', she said.

During her contribution, Minister Rivers also explained that:

'Cayman's primary function in the global financial services ecosystem is to provide the ability for investment flows to be efficiently and effectively deployed around the world. In addition, Cayman's adherence and ongoing support of international standards allows international competent authorities – including those relevant authorities in each EU Member State – to have access to the information they need from Cayman to determine and protect their own bases'.

Later that evening Minister Rivers attended the inaugural EBS Business Leaders' Dinner and Awards ceremony at the Egmont Palace in Brussels, where she dined with the Belgian Ambassador to Denmark, Leo Peeters, and the organiser of the Summit.

Minister Rivers will continue engaging with EU policymakers in Brussels during the week. 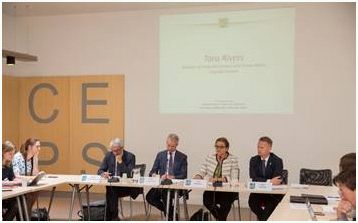 Minister for Financial Services the Hon. Tara Rivers (second from right) speaks during the European Business Summit roundtable "EU Taxation Policy: Which impact on EU's attractiveness and competitiveness?" in Brussels on 23 May. 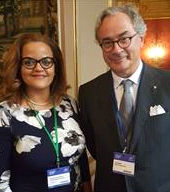 Minister for Financial Services the Hon. Tara Rivers, with the Belgian Ambassador to Denmark, Mr Leo Peeters, at the European Business Summit's Business Leaders Dinner and Awards Ceremony on 23 May.