Canada: CSA Reports Continuing Progress For Representation Of Women On Boards, But Not For Women In The C-Suite

The Canadian Securities Administrators (CSA) have published their Report on Sixth Staff Review of Disclosure Regarding Women on Boards and in Executive Officer Positions (Report), which tracks metrics between 2015 and 2020 for 610 TSX-listed companies whose fiscal years ended between December 31, 2019 and March 31, 2020.

Progress at the board level

Progress continues to be made toward increasing the representation of women on TSX-listed company boards in most industry sectors. 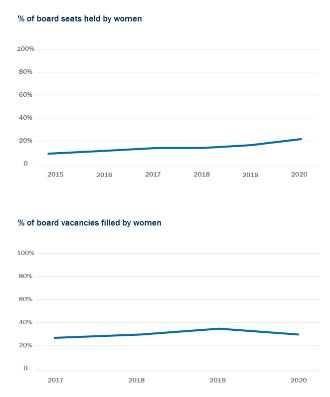 Targets and director term limits continue to be uncommon

Likewise, the percentage of issuers that have adopted director term limits (e.g., age limits and/or term limits) has increased only modestly in the past six years, from 19% in 2015 to 23% in 2020. An additional 34% of issuers reported that they have adopted other board renewal mechanisms, such as assessments of the board and individual directors. The Report does not indicate whether there is any correlation between: a) the adoption of term limits or other board renewal mechanisms and b) the percentage of board seats held by women and/or board vacancies filled by women. The inclusion of such data in the future could help issuers and investors evaluate the usefulness of such mechanisms.

The Report Indicates that only small gains have been made since 2015 in the representation of women in the C-suite.

What could drive more rapid change?

The CSA's disclosure-based framework has facilitated monitoring of issuers' gender diversity practices. The rate of progress on certain metrics, however, may not be sufficient for some stakeholders and policymakers. Outside Canada, some governments have introduced quotas for the representation of women on boards and/or in executive officer positions1. Earlier this year, the Capital Markets Modernization Taskforce established by the Ontario government recommended that Ontario securities legislation be amended to require all publicly listed issuers to set board and executive management diversity targets, implementation timelines for achievement of those targets, and tenure limits for directors2. Although requirements like these fall outside the traditional scope of securities regulation in Canada, they are consistent with initiatives being driven by proxy advisory firms and institutional investors3.

However, in its recently released 2021 budget, the Ontario Government was notably silent on the Taskforce's diversity target and term limit recommendations. Absent the express endorsement from the Ministry of Finance, it is unclear whether and when the OSC will pursue these proposals.

2 For more information on these and other governance-related recommendations by the Taskforce, see our recent bulletin "Ontario's Capital Markets Modernization Taskforce issues final recommendations".