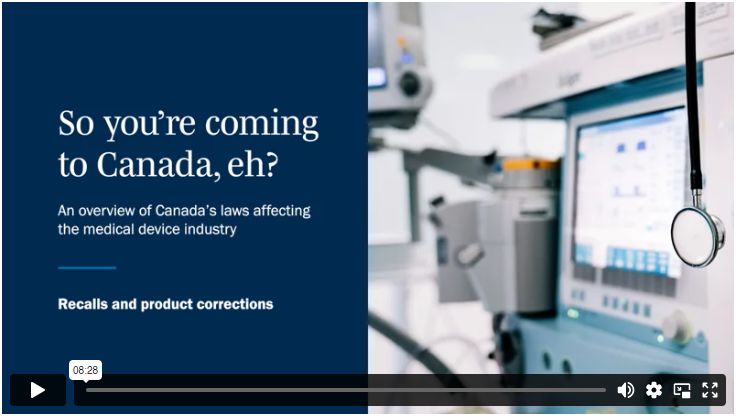 The steps involved in initiating the removal or correction of a medical device within the Canadian market can be nuanced and complex.

Grant Worden (00:07): Hello and welcome to the next installment in Torys' eight-part medical device series, "So you're coming to Canada, eh? An overview of Canada's laws affecting the medical device industry." I'm joined today by Eileen McMahon and Yolande Dufresne who will be speaking today about medical device recalls and product corrections. Yolande, let me start with you. What is a recall?

Yolande Dufresne (00:28): So a recall is really any action taken by a manufacturer or importer of a medical device to remove or correct product that's already out there in the marketplace. There are a couple of reasons why a recall might be initiated. Two of the big ones that we see being firstly, that there's some sort of defect in the product that causes a risk of harm to consumers or to end users. So for example, there might be an issue with manufacturing that introduces a contaminant or that causes the product to malfunction. And so we see that from time to time. And then the second reason that recalls might be initiated is due to a labelling issue. So for example, there may be insufficient warnings or improper instructions for use on the product labelling and so a recall is initiated to correct those issues.

Grant Worden (01:16): Eileen, broadly speaking, how do recall procedures and laws in Canada differ from those in the US?

Eileen McMahon (01:24): Well generally speaking, Yolande and I are contacted by companies who are instituting, or considering instituting, a recall in the United States, and some Canadian products are affected. So for the most part, the approach to a recall in the US is very similar to Canada, as I understand it. But one difference I would point out is that Yolande and I have experienced instances where some corrective action in the United States is not regarded as a recall under US law, as I understand it, but would be regarded as a recall under Canadian law. So there can be some nuances between the approaches taken in the different countries.

Grant Worden (02:06): And that's an important distinction because we often see in product liability actions, references and pleadings to recalls. And plaintiffs aren't always clear about whether they're referring to recalls that result in products being withdrawn from the marketplace or other kinds of corrective action. So it's important to educate the court on, first of all, the fact that there is a distinction between those two things, although not in the legal sense. And to make it clear to the court what we're talking about. Yolande, does a medical device manufacturer have to involve Health Canada in respect of a recall?

Yolande Dufresne (02:40): They do, yes. So a medical device manufacturer that's conducting a recall needs to notify Health Canada within 24 hours of their decision to commence a recall, and then within three business days of commencing the recall, they need to submit an initial recall report to Health Canada. And there's specific information that needs to go into that recall report. For example, an evaluation of risks and a discussion of the number of units that have been distributed, the scope of distribution, among other factors.

Grant Worden (03:11): And Eileen, what considerations go into a decision as to whether to effect a recall?

Eileen McMahon (03:17): Yes. Well first, a company will fact gather, so assess the situation, determine which countries are involved—usually Canada is involved if Yolande and I are contacted—the number of lots affected, where the lots are in the field, health hazard analysis, for example, root cause analysis. And the idea behind all of this is to assess what action do we take to ensure the safety of Canadians, for example.

Grant Worden (03:52): And Yolande, what steps are involved in a recall?

Yolande Dufresne (03:55): So the steps that are taken in a recall will of course vary based on the circumstances and the level of risk involved. One of the first steps that's typically taken is that there is a quarantining of the devices to stop further distribution of the products in the marketplace. Secondly, there's typically a notification to customers, and so this can take various forms. It could be a notice to retailers asking that retailers remove the product from the store shelves. It could be in a notice on the recalling company's website that's directed more broadly, for example, when there's quite a broad distribution of the products. And then Health Canada does also post a recall notice on its public database. And so it will work with the manufacturer to develop the content for that recall notice. An additional step that's typically taken is the accounting of products. So Health Canada will usually want to know what percentage of products are still out there on the marketplace versus what percentage have been destroyed or returned. And then the final step that's typically taken in a recall is the implementation of corrective actions. And so based on the cause of the recall, there may be changes to a manufacturing line. There may be new policies implemented at the company, directed at quality or directed at label reviews and revisions. And so that's also an important step in recalls.

Grant Worden (05:16): And Eileen, earlier on, we were talking about the fact that some recalls can lead to litigation. What are some of the litigation considerations a company should have in mind when they're effecting a recall?

Eileen McMahon (05:29): First, I would say timing is relevant. So if there is a severe safety risk, you want to ensure that time is of the essence, generally speaking, with what you're doing. Second, communications external to the company will be consistent with what Health Canada has said. You don't want to confuse the marketplace by communicating information that is at odds with what the regulator is saying. Internal communications, you want to be mindful of those communications because sometimes there can be comments that are damaging if litigation were to arise. The next thing you'd want to consider is experts. So do we have experts, internal and external, that have done the health hazard analysis, who have considered the root cause analysis to take appropriate action? And then I would say, Grant, you also want to consider the reasonableness of your position, right? Because sometimes companies will convince themselves that they don't need to take corrective action or they don't need to conduct a recall, but an external person with an objective lens might disagree. So you just want to be aware of those kinds of factors as you go through your proposed action.

Grant Worden (06:48): And those are all excellent risk mitigation steps. Of course, even if you take those steps, sometimes litigation is inevitable. And in those cases, we typically see plaintiff's counsel making arguments that the risk that led to the recall was foreseeable and the company didn't act quickly enough to address the risk. And failed to disclose it to the Canadian public. Those issues and how to respond to them are beyond the scope of today's discussion. So why don't we focus then on cross-border issues? Yolande, if you could please comment on how the Canadian recall impacts on the sale of products in other jurisdictions.

Yolande Dufresne (07:28): Sure. So I guess my general comment would be that companies typically like to align their recall actions among various countries, provided that the facts don't dictate otherwise. And so if a company is recalling in various jurisdictions, they'll want to ensure consistency among written correspondence and among actions taken. So often companies will have a global notice for the recall that they've drafted, and then they'll make certain changes that are country-specific on a minimal basis. And then companies will also try to ensure that their business units in the various countries are speaking to one another to make sure that there's a consistent communication and process that's being taken among the various countries.

Grant Worden (08:11): Thanks Yolande and thank you Eileen.

Grant Worden (08:13): And thank you for joining us here today. We hope you enjoyed our eight-part medical device series, "So you're coming to Canada, eh? An overview of Canada's laws affecting the medical device industry."