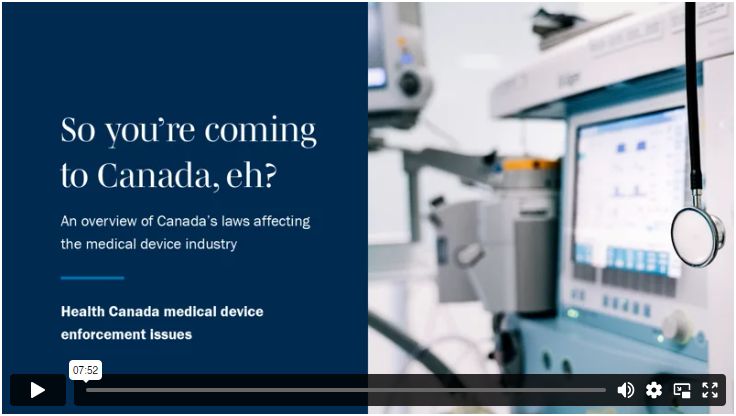 Canada applies a lifecycle approach to the regulation of medical devices, with Health Canada holding broad enforcement powers. So, how do manufacturers ensure they follow best practices for post-market surveillance?

Yael Bienenstock, Teresa Reguly and Grant Worden share how to navigate an ongoing relationship with regulators, including:

Grant Worden (00:04): Hello and welcome to the next installment in Torys' eight-part medical device series "So you're coming to Canada, eh? An overview of Canada's laws affecting the medical device industry." My name is Grant Worden. I'm joined today by Teresa Reguly and Yael Bienenstock who will be speaking about post-market surveillance and enforcement powers of Health Canada with respect to medical devices sold in Canada. Teresa, let me start with you. Once a medical device has been authorized for sale in Canada, how does Health Canada monitor for ongoing compliance?

Teresa Reguly (00:35): Yeah, that's a great question, Grant. So if you're a manufacturer of a medical device, your obligations don't stop the minute that license is issued to you. You are required to do a number of things to ensure that the products you're selling continue to be safe and effective. So, for example, there's a mandatory incident reporting framework under our legislation where if you as a manufacturer learn that there's been an incident that resulted in patient harm or even damage to property, you might have to report that to Health Canada. And Health Canada will look at those reports and assess, you know, what was the issue? Was it related to a defect in the device? Is it something that the manufacturer is going to have to correct going forward? Health Canada receives reports like that from hospitals, physicians, other health care professionals as well. So again, they're going to be reviewing that information and potentially following up with the manufacturer if there are any concerns. The other thing that Health Canada will do is, if you have a facility, where medical devices are made or imported, distributed from those facilities are going to be inspected on a regular basis. And so Health Canada is constantly looking for, you know, just often not big issues, but improvements that can be made to those facilities and the processes and will issue requirements on the owners of those sites to make updates to their processes.

Grant Worden (02:02): And if Health Canada feelsthat there's a serious issue that requires some kind of action, what can it do to enforce that action?

Teresa Reguly (02:09): So Health Canada has a wide variety of enforcement powers under our legislation. If they're really concerned that a device could be harmful if used, they can issue a stop sale order or stop import order, meaning that the manufacturer and everyone in the supply chain can no longer be selling the device in Canada. Most recalls in Canada are voluntary, meaning that the manufacturer actually approaches Health Canada, works collaboratively with Health Canada to manage the recall because they want the device removed from the market. But that's not always the case. Health Canada has the power to order a recall so that it is Health Canada who's instructing the manufacturer and everyone down the line on what to do to remove the product from the market as quickly as possible.

Grant Worden (03:00): And what are the best practices for dealing with Health Canada to avoid the implementation of those enforcement powers? I think with any regulator, relationships are important.

Teresa Reguly (03:09): You know, if you're a medical device manufacturer, you're going to be often dealing with the same persons within Health Canada over and over again. And you want to maintain, you know, as much collaboration and good working relationship as you can. Now that being said, if Health Canada is making demands for information that you feel are unreasonable or just seems to be getting stuck on an issue, it's not that you just have to roll over and do what they say. That's usually when I call one of my colleagues like Yael to, from a litigation point of view, to help assist the client on what's the best approach forward.

Yael Bienenstock (04:21): The main option is to go to a judicial review, meaning you bring an application for the court. For the court to review the decision. And before you decide whether to do that or not, the first thing you're going to want to do is look at the legislation that gives Health Canada its power. Teresa said a couple of times, Health Canada has broad enforcement powers. Well, they might be broad, but they're not unlimited. And so the question is what do they have the power to do and are they acting reasonably within the power? The other thing that you're goingto want to look for when you look at the legislation is, are there any internal appeal mechanisms? Are there any guidance documents that set out internal review mechanisms for decision making? Because if those are there, then that's the route you need to take in order to review the decision. And you won't be able to rush straight off to court if you haven't exhausted the internal appeal mechanisms.

Grant Worden (05:13): And if a manufacturer gets to the stage where it's considering pursuing a judicial review application, what factors should it consider?

Yael Bienenstock (05:21): So there's really five key things to keep in mind before you start a judicial review. One is timing. Judicial reviews have to be commenced fairly quickly, typically within 30 days. There are exceptions, but they're not unlimited. And so you need to act quickly. You need to assess quickly whether this is something you're going to want to do. The second thing is, as I alluded to before, typically, if you end up in a court, you don't get to put in additional evidence.The evidence that goes before the court is the evidence that was before the regulator. And so when you're doing that back and forth with the regulator as I said before, you want to make sure you arm yourself with self-serving evidence. Well, maybe not self-serving, but the things that you need to be able to win your judicial review. The third thing to keep in mind is that when courts do review administrative decision making, they are very cognizant of the fact that Parliament has made a deliberate decision to authorize these administrative decision makersto make decisions and don't want courts making these decisions. And so generally it's a pretty deferential approach. And as long as the decision is reasonable, as long as it's within the bounds of the authority, there is evidence to support it. Courts are going to be pretty deferential. So you want to keep that in mind in deciding, you know, what are your odds? Is this worth pursuing? The fourth thing to keep in mind is that you may have a procedural fairness issue. And so, you know how much in procedural fairness a manufacturer is entitled to is going to vary a lot depending on the circumstances. But typically, at a minimum, you're going to have the right to notice and the right to be heard. And depending on the specific situation, there may be other things. And if there's some sort of breach of a duty of procedural fairness, then courts will scrutinize that much more closely. Then they will scrutinize the decision on the merits. So that's the fourth thing to keep in mind. Fifth is remedy, because judicial reviews can be a little tricky in the sense that what courts really like to do on a judicial review is send the matter back to the regulator. They might say, you know, do it differently. Keep these principles in mind. This is where you went wrong the first time. Go back and do it again and hopefully you'll get it right. But regulators in many circumstances will make the same decision again. And then you might be in a situation where you have to bring another judicial review. It really depends on what the circumstances are. Those are the five key things to keep in mind.

Grant Worden (07:37): Thanks, Yael, and thanks, Teresa. And thank you for joining us here today. We hope you'll join us on the next installment of our eight-part video series. "So you're coming to Canada, eh? An overview of Canada's laws affecting the medical device industry."