Canada: Small Modular Reactors And The Future Of Nuclear Energy In Canada

Canada is positioned to be a global leader in the development of nuclear energy as a cost-effective, non-carbon emitting energy source on the road to net zero emissions.

In this video, Krista Hill, Josh van Deurzen and Michael Fortier explore the development of Small Modular Reactors (SMRs) in Canada and the positive trend of collaboration between a variety of stakeholders as we work together towards our national goal of net zero by 2050. 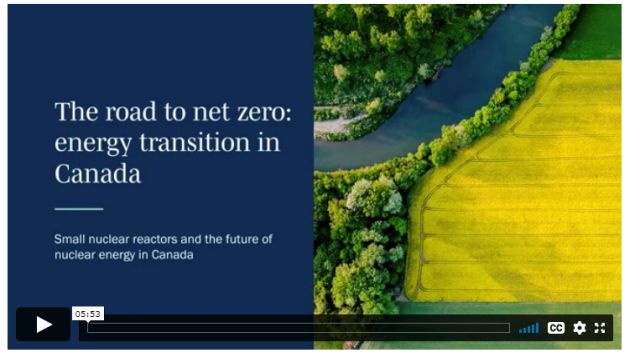 Krista Hill (00:25): Nuclear power can be an attractive option for governments, utilities and grid operators looking for ways to move away from carbon intensive generation, while maintaining the ability to serve customers reliably. As most people know, nuclear power generation offers reliable baseload power with no carbon emissions. We see countries around the world considering what role nuclear power can play in their supply mix. Even those countries that have not shown recent interest in nuclear power, like Germany and Japan. Small modular reactors or SMRs, have become an attractive option for grid reliability as multiple facilities instead of one large plant can provide greater optionality for system planning.

Josh Van Deurzen (01:16): In Canada, we've seen a lot of activity around innovative SMR technologies, with Ontario Power Generation leading the charge, partnering with General Electric Hitachi Nuclear Energy on a small modular reactor project for OPG's Darlington facility, and also with X-Energy for industrial applications. A trend that we see in this space that we think is very positive is a lot of collaboration around the development of this new technology, including among government authorities, owners and private industry. For instance, the inter-provincial collaboration MOU between the provinces of New Brunswick, Ontario, Saskatchewan and Alberta, continues to advance the development of SMR technologies, including by releasing a strategic plan for the development of SMR technology earlier this year. The strategic plan sets out a number of priority areas for focus, including positioning Canada as a global leader in nuclear innovation, developing a robust regulatory framework, securing federal government financing and policy support, participation by Indigenous communities, and nuclear waste management. Also the recently announced partnership between Tennessee Valley Authority and OPG is evidence of owners coming together to mitigate financial risks associated with developing this new technology. We're also seeing at the contracting level the private sector and owners using collaborative contracting models to mitigate delivery risk and ensure the success of delivery of SMR technology. On the whole, we see SMR projects becoming an important part of the transition to cost-effective, non-carbon emitting energy.

Michael Fortier (03:17): And a key part of that will be making sure that from a regulatory perspective that these projects can be reviewed in an efficient manner so as to meet the 2050 timing. And Canada is very fortunate in that it's got a rigorous regulatory regime already in place for nuclear projects and has experience licensing them in the past. There's also a growing recognition that for Canada to meet the 2050 net zero timing, it's going to have to have its regulatory processes applied in an effective and efficient manner. And as part of that, I think one of the trends we're seeing on the ground definitely is that there is increased collaboration and constructive engagement between proponents, regulators, the public, Indigenous communities, as well as certain other participants. And I think that will lead to good SMR projects getting better as well as helping those projects get through in a timely manner, which keeps coming back to being a key theme from a regulatory perspective. And at first blush, 2050 seems like it's a long way off. But given the number of steps that need to occur and the number of projects that need to occur, it's actually quite an urgent timeframe. And certainly my day to day work on regulatory aspects that comes up frequently about this urgency. And Krista and Josh, I don't know if you've seen it in your work as well, this urgency kind of coming to the fore and really helping to form how nuclear projects are being conducted in Canada.

Krista Hill (05:02): I think so, I think that's right that there's such a long lead time in planning any sort of infrastructure power project. You add on the complex technology that's involved in a nuclear power project, and it makes that timeline of development, construction, commissioning even longer. So I agree although 2050 does seem like a long way away, when you start planning out how certain provinces and certain areas of Canada, what they need to do to meet their carbon commitments, it does start seeming like a much shorter timeline. Thank you for watching.