Canada: Copyright In The Subject Matter Of A Photograph

A recent decision of the United States Court of Appeals for the Ninth Circuit raises some interesting issues concerning the copyright in a photograph.

The case involved a famous photograph that the plaintiff took in 1984 of Michael Jordan, who at the time was a student at the University of North Carolina.  The photo originally appeared in Life magazine as part of a photo essay featuring American athletes competing in the 1984 Summer Olympic Games. The photograph looks like this: 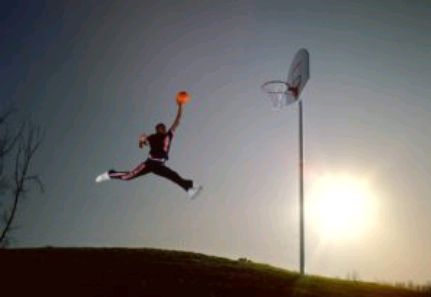 The photograph of Jordan is highly original. It depicts Jordan leaping toward a basketball hoop with a basketball raised above his head in his left hand, as though he is attempting to dunk the ball.  The plaintiff instructed Jordan on the precise pose to be assumed.  It was an unusual pose for a basketball player to adopt, one inspired by ballet's grand jeté, in which a dancer leaps with legs extended, one foot forward and the other back. The setting for the photo is not a basketball court, but an isolated grassy knoll on the University of North Carolina campus. The basketball hoop appears to tower above Jordan, beyond his reach.

In late 1984 or early 1985, Nike hired a photographer to produce its own photograph of Jordan, one obviously inspired by the plaintiff's. In the Nike photo, Jordan is again shown leaping toward a basketball hoop with a basketball held in his left hand above his head, as though he is about to dunk the ball. The photo was taken outdoors and from a similar angle as in the plaintiff's photo, so that the viewer looks up at Jordan's figure silhouetted against the sky. In the Nike photo the Chicago's skyline appears in the background, as Jordan was playing professionally for the Chicago Bulls. The Nike photograph is set out below: 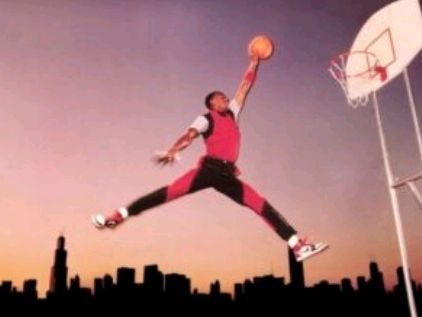 Jordan is wearing apparel reflecting the colors of his new team, and a pair of Nike shoes. Nike used this photo on posters and billboards as part of its marketing campaign for the new Air Jordan brand.

When the plaintiff saw the Nike photo, he threatened to sue Nike for breach of the limited license governing use of the color transparencies.  To avoid litigation, Nike entered into a new agreement with the plaintiff in March 1985, under which Nike agreed to pay $15,000 for the right to continue using the Nike photo on posters and billboards in North America for a period of two years.

In 1987, Nike created its iconic "Jumpman" logo, a solid black silhouette that tracks the outline of Jordan's figure as it appeared in the Nike photo. Over the past three decades, Nike has used the Jumpman logo in connection with the sale and marketing of billions of dollars of merchandise.  It has become one of Nike's most recognizable trademarks. The trademark is set out below: 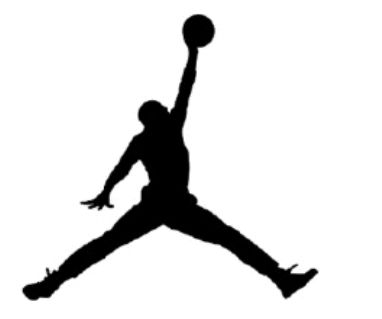 The plaintiff brought an action for copyright infringement in January 2015. The claim for damages was limited to the three year period prior to issuing the statement of claim. The District Court concluded that neither the Nike photo nor the Jumpman logo infringed the plaintiff's copyright. The plaintiff appealed.

On appeal it appears that the primary issue was whether the Nike photo and logo were substantially similar to the plaintiff's photo.

The court said that no photographer can claim a monopoly on the right to photograph a particular subject just because they were the first to capture it on film.  A subsequent photographer is free to take their own photo of the same subject, so long as the resulting image is not substantially similar to the earlier photograph. The plaintiff was entitled to protection only for the way the pose was expressed in the photograph, a product of not just the pose but also the camera angle, timing, and shutter speed chosen.

What is protected by copyright is the photographer's selection and arrangement of the photo's otherwise unprotected elements.  If sufficiently original, the combination of subject matter, pose, camera angle, etc. receives protection, not any of the individual elements standing alone.

The court concluded that the works at issue were not substantially similar.  Just as the plaintiff made a series of creative choices in the selection and arrangement of the elements in his photograph, so too Nike's photographer made his own distinct choices.  Those choices produced an image that differs from the plaintiff's photo in more than just minor details. Nike's photographer did not copy the details of the pose expressed in the plaintiff's photo; he borrowed only the general idea or concept embodied in the photo.

The differences in selection and arrangement of elements, as reflected in the photos' objective details, precluded a finding of infringement. Nike's photographer made choices regarding selection and arrangement that produced an image unmistakably different from the plaintiff's photo in material details—disparities that no ordinary observer of the two works would be disposed to overlook.  What the plaintiff's photo and the Nike photo share are similarities in general ideas or concepts. Permitting the plaintiff to claim such a right would withdraw those ideas or concepts from the stock of materials available to other artists. Copyright promotes the progress of science and the useful arts by encouraging others to build freely upon the ideas and information conveyed by a work.

In Canada photographs are protected as artistic works under the Copyright Act. The Act requires originality which can be satisfied by the expression of the image contained in the photograph so long as skill and judgment originating from the author has been exercised. Skill and judgment may arise from the choice of subject matter, the creation of the scene to be photographed, the angle of the photograph, lighting or other matters.

As in the U.S. unless a substantial part of a work is reproduced there can be no infringement. What amounts to a substantial reproduction cannot be defined in precise terms but is a matter of fact and degree. It depends not merely on the physical amount of the reproduction but on the significance of that which is taken. The test applied is purely visual.

In one case the defendant photographer positioned members of the dance troupe in the same way as they were depicted in the plaintiff's photograph. Since the camera angles and props were the same this was found to be a deliberate intentional copy and an infringement.

As a result of this approach it seems relatively unlikely that a Canadian court would automatically exclude from protection the depiction of Jordan leaping toward a basketball hoop with a basketball raised above his head in his left hand, as though he is attempting to dunk the ball, particularly when the plaintiff instructed Jordan on the precise pose to be assumed.

This case illustrates the differences in the law of copyright in the U.S. and Canada notwithstanding that both countries adhere to the Berne Convention.