Australia: Businesses should think twice before using a shape mark

A recent Federal Court case illustrates why businesses should ensure that they are using their trademarks correctly when they are taking action against a third-party for trademark infringement.

In this case, the defendant was successful in their counterclaim alleging that the plaintiff had failed to use their shape mark properly.

The Plaintiff, RB, owned two trademarks in Australia that are associated with the dishwashing brand, FINISH. These products prominently feature a red power ball in the centre. Please see below for your reference.


The defendant, Henkel, is part of the global Henkel Group that sells a range of products including dishwashing goods. In or about April 2011, Henkel launched a new product line called the SE Gelcaps in Europe. Henkel sought to launch their new product line in Australia in August 2021, however RB obtained an interlocutory injunction stopping Henkel from selling the SE Gelcaps in Australia.

RB commenced proceedings against Henkel alleging trademark infringement, passing off and misleading and deceptive conduct. Henkel filed a counterclaimed that RB had not properly used the 914 mark and it should be removed from the Trademark Register. 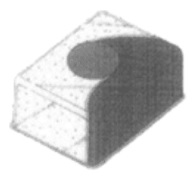 
Rofe J referred to Kitto J's decision in Shell Company of Australia Ltd v Esso Standard Oil (Australia) Ltd (1963) 109 CLR 407 of whether there has been use of a trademark. In that case, the test used was whether the use of the mark showed a connection between the product and the owner.

In applying this test, it became increasingly clear that the main image that was used to link the Finish product and RB (The Owner) was the use of the Finish logo prominently seen on top of all Finish products. The 914 mark merely played a secondary role in illustrating what the product looked like. It failed the test.

Businesses should take note of the following: