The soccer World Cup is the largest and arguably most prestigious sporting tournament in the world. The 2018 World Cup in Russia attracted a combined 3.57 billion viewers, accounting for more than half of the global population aged four and over. The final between France and Croatia was watched live by a combined 1.12 billion viewers worldwide. That's quite the marketplace!

The 2022 World Cup is set to kick off in Qatar on 20 November. With these viewership statistics, brands will be clamouring to be at the forefront of consumer consciousness - even more so if they are afforded exclusivity in doing so. Mention "exclusivity" and you can't escape intellectual property. In the lead up to this most celebrated event, we explore some of the IP soon to be on display in Qatar.

A patent is a type of intellectual property that grants its owner exclusive rights for a limited time in exchange for a disclosure of the invention.

Hailed as a "World Cup of Innovations", we are no doubt going to see a lot of amazing technological advancement - camerawork, graphics and analysis, boots and kits made of recycled materials, air conditioned stadia, etc. We've read-up on some of the more interesting new technologies and their related patents or patent applications.

The VAR system is possibly the most innovative (and controversial) technology introduced to football. Depending on who you support, you very likely love it one week and hate it the next. In short, the VAR system involves, with assistance from advanced video technology, "off-field" referees working together to aid the "on-field" referee in reviewing important decisions, for example, goals, penalties, red cards, and player identities. In the World Cup 2022, the VAR system will include, for the first time, a new feature - Semi-automated Offside Technology, which assists in offside decisions.

Hawk-Eye Innovations, a Sony Group company, is the provider of the VAR system for the World Cup 2022. An example of this technology is found in pending European Patent Application No. 20210667.0. Claim 1 defines a data processing method, comprising

obtaining information identifying a position of an object in a scene at a time during a sporting event;

obtaining an image of the scene captured at the time during the sporting event;

projecting the position of the object in the scene onto an image plane of the image; and

outputting information based on the projection.

In an embodiment of the invention, a plurality of static and rotatable cameras (see the figure below adapted from Figure 1B of the specification) around the football pitch are used to capture the 3D position of an object (for example, a player or a football). These 3D positions are then processed to produce a full or a portion of pitch image comprising players and/or football positions, supposedly enabling accurate real-time analysis of a given player's on-side or off-side status. 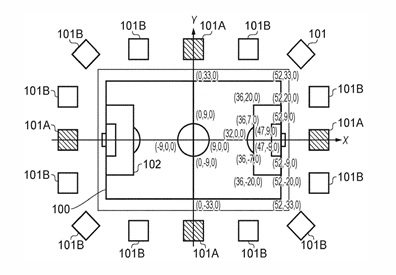 The official match ball for the 2022 World Cup, Adidas' Al Rihla, features, for the first time, a connected ball technology which will relay real-time data to VAR officials, collaborating with the Semi-automated Offside Technology.

This new technology was developed in collaboration with KINEXON. An example of KINEXON's technology is disclosed in U.S. Patent No. 11,150,321, as a system for estimating the orientation of an object from radio measurements. Claim 1 recites:

a first transceiver configured for being attached to an object;

a plurality of second transceivers defining a localization grid with reference positions,

The invention provides pure radiolocation measurements without additional sensors to determine the orientation of an objection, which saves cost and space and is significantly less complex than the conventional system.

Entertainment for the Visually Impaired

Visually impaired football fans will be able to access and enjoy the 2022 World Cup, thanks to products that converts digital content into braille.

One such product is the Feelix Palm, which is a palm communicator with tactile features. Using electrical impulses, the Feelix will offer braille-like messages to the visually impaired. An example of this technology is disclosed in U.S. Patent No. 9,304,588. Claim 1 defines:

a signal receiver configured to receive data received from a wireless signal;

In one embodiment of the invention (see the figure below adapted from Figure 1A of the specification), the public event data includes information describing a status of a sports game. The status of the sports game may include at least of a game score, a time status of the game, and a number of time-outs remaining. The data is transmitted wirelessly from a data source (such as a scorekeeper's computer) to occupants within a particular venue, such as a stadium. 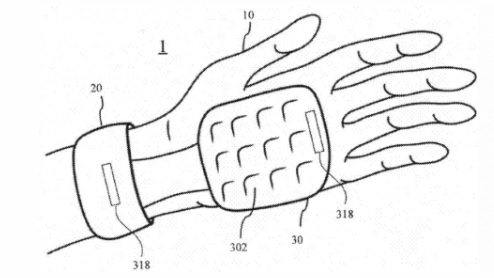 Another product was developed by Bonocle. An example of this technology is disclosed in U.S. Patent Publication No. 2020/0168121. Claim 1 defines:

A handheld device for translation of digital content on a display into tactile feedback, the device comprising:

a body shaped to be substantially grasped by a user;

a microcontroller located on the handheld device;

a motion sensor for detecting movement of the handheld device relative to a surface;

In some embodiments, the device is to be used with a smartphone, tablet, or other computing device without requiring an indicator or other display such as is commonly used with a mouse or other input device.

The Predator series boots are arguably the most successful and popular boots in the history of the game. Invented by Australian footballer Craig Johnston, the original Predator boots were released in 1994 and are disclosed in Australian Patent No. 650081. Claim 1 recites:

A sports shoe for activities which involve kicking a boll, in particular a football boot, having an upper (50, 52) and a sole (54), wherein at least one preferred ball contact surface region (66, 68) of the outer surface of said upper is provided with resiliently deformable rib-like formations (70,70', 70") which extend substantially transversely over said ball contact surface region

characterized in that at least a plurality of the rib-like formations (70, 70', 70") are each formed with one or more slits (72) which divide the crest of each formation into separately deformable parts.

In an embodiment of the invention (see the figure below taken from Figure 7(a) of the specification), the boots are particularly advantageous for effecting a lateral kick which is ordinarily executed using the inner side of the boot. In a lateral kick, the ball travels along the inner side region of the boot and its line of travel is interrupted by the elastomeric strips 70 which deform at successive locations along the line, thereby enhancing contact surface area between ball and boot.

One need only compare these boots (and other lightweight, impressively coloured boots competing against them on the shelf) with the heavyweight, square-toed ankle boots worn as recently as the 1960s to appreciate just how much of a part technology and innovation has played in the end product - the football itself.

A design right protects the overall visual appearance of new and distinctive products.

Each World Cup features new kits, boots, accessories and the highly-anticipated official match ball (we all remember the Fevernova!).

The 2022 World Cup will feature Adidas' official match ball Al Rihla, meaning "the journey" in Arabic. The U.S. Design Patent No. D936766, filed by Adidas, captures an ornamental design for a ball. 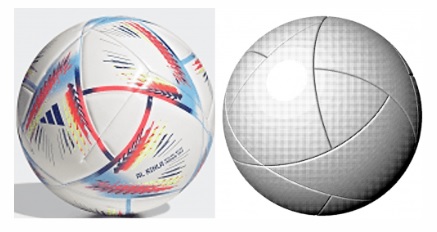 Plant breeder's rights (or plant patents as referred to in the United States) are a form of intellectual property in relation to exclusive commercial rights for a registered variety of plant. It protects plant breeders and gives them a commercial monopoly for a period of time, encouraging plant breeding and innovation, and means that a large and growing pool of new plant varieties is freely available to anybody when the protection periods lapse.

The turfgrass on a football pitch is an important aspect of the game. For the 2022 World Cup, the grass needs to be selected in accordance with Qatar's weather to exhibit wear tolerance, consistent colour, and the ability to grow in the low light conditions of semi-enclosed stadiums. The exclusive turfgrass for the 2022 World Cup is the Platinum TE Paspalum. This plant variety is registered as the U.S. Plant Patent No. PP19,224, which relates to:

With that said, the organisers aren't taking any chances. There is a farm outside of Doha at which approximately 70 pitches-worth of "reserve" TE-13 is being cultivated in case of unexpected wear and tear within the stadia. Compared with the muddy bogs games would occasionally be played on in the past, this is another clear example of the positive impact of technology on the end product.

Notably, as the tournament will be broadcast all over the world, each country would have at least one broadcasting rights holder. For example, the rights are held by SBS in Australia and by Sky in New Zealand.

We hope that you enjoy the Qatar World Cup 2022! Late nights, early mornings - it's a quadrennial rite of passage. Let's hope that come the tournament's end, the new technologies (even those as polarising as VAR) are only remembered only in a positive light.