The number of Indigenous deaths in NSW Police custody in 2021 doubled the previous record set 25 years ago.

In 2021, 16 Aboriginal people died while in police custody, doubling the previous record of eight in 1997.

The NSW State Coroner is responsible for investigating any death that occurred within police custody under the Coroners Act 2009 (NSW).

Under that Act, the Coroner must provide a report on these deaths annually.

According to the most recent report, of the 43 deaths in this category in 2021, 16 were First Nations people. That represents 37.2% of all those deaths. 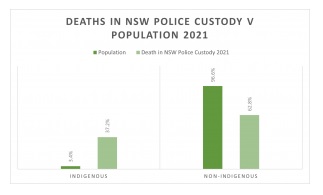 Indigenous Deaths in NSW Police Custody at all time high

None of the deaths from 2021 have gone to a hearing by the NSW Coroner as of yet. There is an accumulation leading to a backlog of inquests into police deaths.

For example, the death of Barkindji man Anzac Sullivan falls into the statistics above. It will become the subject of an inquest in the near future.

Sullivan died after a pursuit by police in Broken Hill in March last year.

Anzac was the fourth Indigenous death in custody in less than a month, and the third in the state of NSW alone.

Anzac's sister, Donna, said he was a "loved brother, nephew, son and uncle."

In a statement, NSW Police said officers on the day attended an address in the town over an outstanding warrant.

"It is alleged the 37-year-old man ran from police. A short time later patrolling officers were alerted to a male suffering a medical episode nearby," it read.

"Police commenced CPR on the man before he was taken to Broken Hill Hospital and declared deceased."

"We are calling for Anzac's death to be investigated urgently by an independent body, and for this investigation to be transparent and accountable to Anzac's family and the Broken Hill Aboriginal community," Crellin stated. 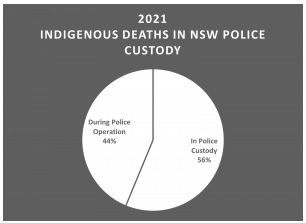 What constitutes a death in police custody?

A death which occurs 'as a result of or in the course of a police operation' has no definition in the Coroner's Act 2009 (NSW).

However, after the commencement of the 1993 amendments to the Coroners Act 1980, New South Wales State Coroner's Circular No. 24 sought to describe potential scenarios that are likely deaths 'as a result of, or in the course of, a police operation'.

This direction described potential scenarios as including:

"[H]aving effected the arrest and incarceration of persons who have seriously breached its laws, owes a duty to those persons, of ensuring that their punishment is restricted to this loss of liberty, and it is not exacerbated by ill treatment or privation while awaiting trial or serving their sentences. The rationale is that by making mandatory a full and public inquiry into deaths in prisons and police cells the government provides a positive incentive to custodians to treat their prisoners in a humane fashion and satisfies the community that deaths in such places are properly investigated.

In the public mind, a death in custody differs from other deaths in a number of significant ways. The first major difference is that when somebody dies in custody, the shift in responsibility moves away from the individual towards the institution. When the death is by deliberate self-harm, the responsibility is seen to rest largely with the institution. By contrast, a civilian death or even a suicide is largely viewed as an event pertaining to an individual. The focus there is far more upon the individual and that individual's pre-morbid state. It is entirely proper that any death in custody, from whatever cause, must be meticulously examined."