A car carrying four Sikh men was attacked by a group of unidentified men with bats in Sydney's Harris Park at around 10 pm on 28 February. The perpetrators are suspected to be supporters of India's ruling party: the Hindu nationalist BJP (Bharatiya Janata Party).

While the Glenwood Gurudwara was placed on high alert on 14 February, after NSW police notified the Sikh temple that a large car convoy of BJP supporters was driving towards it. Although, officers subsequently brought the mobile protest to a halt.

Tensions have been rising between BJP supporters and the Sikh community of late, as the latter has been mobilising in solidarity with ongoing farmer demonstrations in New Delhi, which are protesting against government-implemented neoliberal reforms that are set to harm small-scale farmers. 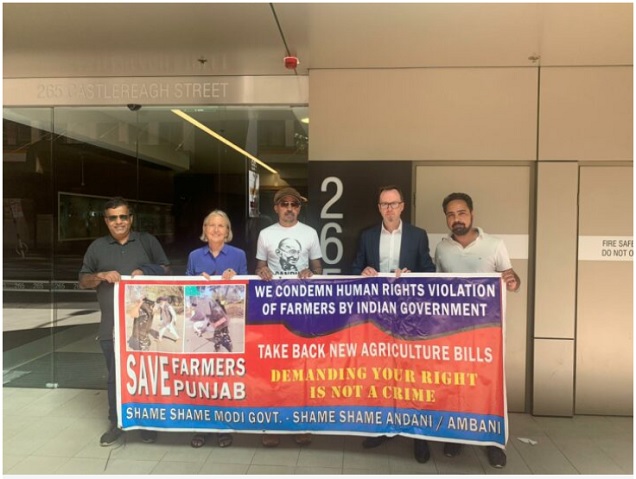 Indian prime minister Narendra Modi and the BJP came to power in 2014. And the authoritarian government has long been criticised for promoting a form of extreme Hindu nationalism within the diverse multicultural and multireligious Indian community.

The BJP passed the Citizenship (Amendment) Act (CAA) in late 2019. It provides a citizenship pathway for unregistered migrants from all religious groups who've fled persecution in neighbouring countries, except for Muslims. Camps in Assam are now operating to detain unregistered Muslims.

After winning a second election in 2019, Modi cracked down on the disputed region of Kashmir. The BJP revoked the Muslim-majority state's special governing status and implemented a six month military lockdown. It then took advantage of the pandemic to increase repressions.

While, last month, 22-year-old climate activist Disha Ravi was arrested on charges of sedition for producing an online document to help those supporting the farmers protesting the new agricultural laws. She has since released on bail after being detained for 10 days.

Established in March last year, the Australia-based Humanism Project is a transnational, multifaith group rallying against the hateful and divisive BJP agenda, which is now spilling out to sections of the Indian diaspora.

The Humanism Project is promoting the culture of tolerance and inclusion that has long formed the basis of Indian society. And it stresses that those causing division are extremist BJP supporters, not the wider Hindu community.

Sydney Criminal Lawyers spoke with Humanism Project co-founder Haroon Kasim about the recent incidents directed against Sydney's Sikh community, how these elements had been operating prior to the farmers' protests, and the approach his group would like to see local authorities take. 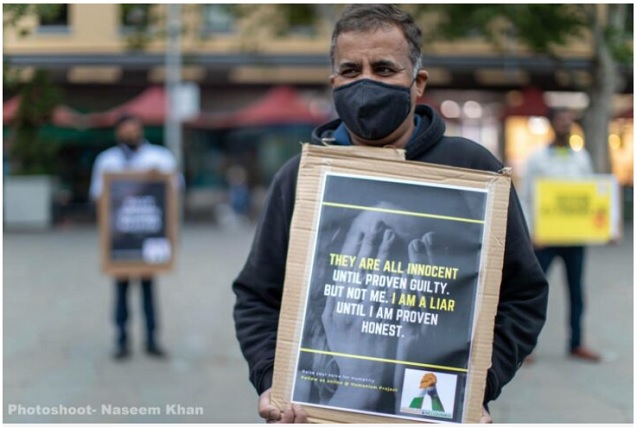 Over the past month, there have been at least four incidents. They were widely reported in various newspapers. And there's also been a lot of messaging on WhatsApp.

The gentleman leading the Sikh community in Sydney, Amar Singh, has received a death threat.

In response, we've created the Australian Alliance Against Hate (AAAH). We released our first press statement, along with David Shoebridge, asking the government to consider the concerns of the alliance, which includes Hindus, Christians, Muslims and Sikhs, as well as people of no faith.

The AAAH is saying there is a real problem that's been growing exponentially over the past four years. And we're asking for the opportunity to engage law enforcement agencies, where we'll present our evidence.

A huge amount of online messaging. It's not only towards Sikhs, but Muslims too. During the COVID pandemic, there was a lot of messaging saying that Muslims were spreading COVID and they were calling this COVID jihad.

There has been a lot of hate messaging against the Muslim community, the Christian community and now, the Sikh community by these right-wing extremists.

The reason it's blown out over the last four years is that we think they're being supported by the Indian government: the BJP.

We've been asking for the Australian government to investigate the funding these people are receiving.

We don't think this is unreasonable. In the US, the BJP has been forced to register as a foreign organisation.

We rejected the Hindu Council's claims that these incidents are not being carried out by right-wing extremists, as there's extensive evidence online.

An Australian solidarity protest with farmers in India

I take a slightly different view on that, as the tensions proceeded the farmers' protests.

The BJP government is based on an ideology called Hindutva, which has very strong congruences with Nazi ideology.

The hate actually started after this government came up. It initially started with the Muslims. Then there was a Dalit woman who was raped. And those standing up for the Dalit woman were targeted. And now it's the Sikh community.

The Sikh community is just a continuation of the hate narrative that has been significantly amplified with the coming of the current government.

But in terms of the farmers' protests, it's about the passing of federal farming laws.

Like in Australia, India has a central government and various state governments. Farming is a state subject. So, the passing of a federal law on a state subject was wrong. There are constitutional problems with it.

Also, the laws were passed without debate. The farmers' concerns were not considered. And in a democratic country, the only time you pass a law by ordinance, which doesn't require voting, is during an emergency.

This wasn't an emergency, but they passed the laws by ordinance.

The issues around the farm laws are around the minimum support price. Being small-scale farmers, they have always been protected by a support price, which helps with sustainability.

The government was going to take that away. The farmers were obviously concerned if there was no minimum price and the corporates take over, that the corporates will dictate the price the farmers will get and that will impact on the viability of their farming livelihoods.

Those are the concerns at the high level. It was not constitutionally passed. The minimum price is an issue, which is something that the federal government was trying to do in violation of its powers.

It is like the Australian federal government trying to do things on state subjects.

We are deeply concerned about two things. Firstly, there's a lack of awareness. One of the questions David raised is about an organisation called the Vishwa Hindu Parishad.

That's really disturbing, as it highlights the lack of awareness of the nature of these organisations. And hence David's question on how this was allowed to happen. The answer is that it's not an extreme organisation in NSW.

But it's like allowing ISIS to teach our children. It's like saying that we chose not to recognise ISIS as an extreme organisation in Australia. It doesn't make sense.

We're concerned about this lack of awareness, and the lack of willingness to recognise the nature of these far-right organisations.

Then there's the issue of the tendency of the government to deal with this as an issue between communities.

The problem is you malign entire communities. It's like saying in terms of Islamic extremism, every Muslim in the community is an extremist.

We're saying please don't look at this as a problem of communities, as the vast majority of Hindus are law-abiding, peaceful citizens.

So, if you don't take a tailored approach to these far-right extremists, you're never going to solve the problem.

How are they going to take a tailored approach? Well, engage with us. We'll tell them about the far-right extremists and why the CIA classes them as such.

Our concern is the government has been closing its eyes. And one example of that is allowing an extremist organisation to teach our children.

It's clear. The resemblance is disturbing. If you go back to Nazi Germany, they talked about disenfranchising Jews from citizenship.

The CAA law in India is going to result in a lot of Muslims losing their citizenship. Amnesty International called it the largest statelessness exercise in the history of the world.

Detention camps have already been built in Assam. These are very strong similarities with Nazi Germany.

The other thing, recently, was the "love jihad" law, which banned interreligious marriages. Again, this is similar to the ban on Jewish intermarriages with others in Nazi Germany.

There is state-sponsored authoritarianism. There are so many civil rights activists, who are languishing in gaol right now in India, just for speaking out.

One month ago, a 22-year-old woman said Indians should be raising awareness of laws that are being passed by the government.

There was a huge campaign against her, just for saying that, and she was arrested. These are really strong authoritarian tendencies.

There are strong authoritarian tendencies involved in the disenfranchising. The whole campaign against minorities has a strong resemblance to the Nazi campaign.

We had a parliamentary briefing last year in NSW, in which we had politicians from all over the world and from this state attend.

The title of that was We Have Become a Fascist State. And one of the speakers laid out 12 features of a fascist state and showed that Modi scores 12 out of 12 on that scale.

One more point is that Assam and Kashmir are already on the genocide watch list.

Classing these as Nazi narratives is not something that's said lightly. As you know, Arundhati Roy does not say things lightly.

Two things. We want to fight hate and divisiveness in India.

We're getting together people of all faiths, all religions, to say that this is not who we are and we don't thrive on hate and divisiveness. We actually celebrate diversity.

And we're reclaiming the diversity of India. In doing that, we're fighting against the narratives of hate.

One of our members, Suniti Sanghavi, in Los Angeles is organising it. They have been fasting for over a year.

Today, it's over 390 days. This is in protest of the fascist government. Fasting is a very Indian, Gandhian, nonviolent way of making concerns known and protesting.

Clearly. It's no different from saying if we knew there was ISIS extremism, and we turned away from it.

The only way that we've been successful in preserving Australia's social cohesion and multicultural ethos is to deal with those people who are causing trouble.

On the morning of the day when the second Harris Park attack occurred, David Shoebridge and our group the Australian Alliance Against Hate met to call on politicians to recognise the problem and engage with us. Then later that night, the incident happened.

So, what do we need to do? All we have to do is recognise there's extremism here. Then we have the resources and the experts already in place to deal with extremists.

What we are doing right now is we're choosing not to recognise it, and that's problematic. ISIS and Islamic extremism were recognised, but that's not happening with Hindu extremism.

We have the resources. All we have to do is recognise the Hindu extremism.