1 The Legislative Framework of the Cartel Prohibition

1.1 What is the legal basis and general nature of the cartel prohibition, e.g. is it civil and/or criminal?

The legal bases of the cartel prohibition are Article 4(1) and Article 5 of the Federal Act on Cartels and other Restraints of Competition (CA) of 6 October 1995, the equivalent to Article 101 TFEU. The basis for fines is Article 49a CA. The Ordinance on Sanctions imposed for Unlawful Restraints of Competition (CASO) of 12 March 2004 regulates details regarding the imposition of fines. The legal nature of the Swiss cartel prohibition is civil.

1.2 What are the specific substantive provisions for the cartel prohibition?

agreements and concerted practices between undertakings operating at the same or at different levels of trade which have a restraint of competition as their object or effect. The Competition Commission (ComCo) has recently increasingly resorted to the notion of an "overall arrangement" to capture several infringements in one overall infringement. This notion resembles the notion of the single and continuous infringement of the European Commission; its contours are, however, less clear.

Article 5(3) CA presumes that arrangements between actual or potential competitors (a) to directly or indirectly fix prices, (b) to limit the quantities of goods or services to be produced, purchased or supplied, and/or (c) to allocate markets geographically or according to trading partners, eliminate effective competition.

The presumption of elimination of effective competition can be rebutted. However, according to the practice of the Federal Supreme Court, arrangements within the meaning of Article 5(3) or (4) CA are generally significant restrictions of competition. To be lawful, such arrangements need to be justified on grounds of economic efficiency. Arrangements are justified on grounds of economic efficiency if: (a) they are necessary to reduce production or distribution costs, improve products or production processes, promote research into or dissemination of technical or professional know-how, or exploit resources more rationally; and (b) they will, under no circumstances, enable the parties involved to eliminate effective competition.

1.3 Who enforces the cartel prohibition?

1.4 What are the basic procedural steps between the opening of an investigation and the imposition of sanctions?

Investigations can be triggered as a result of leniency applications, whistleblowers (individuals), complaints of customers or competitors, press reports, through the Secretariat's own market intelligence or through a chance find of ComCo in another investigation.

Many cartel investigations start with unannounced inspections and interrogations of the representatives of the undertakings subject to the investigation. Often, undertakings file for leniency as immunity is generally also available after an investigation has been opened.

Following the opening of the investigation, the Secretariat will review the evidence gathered, send out requests for information and/or interrogate further persons.

After having concluded the gathering and review of the evidence, the Secretariat drafts the so-called "motion" (which corresponds to the SO of the European Commission). With the motion, the Secretariat requests ComCo to discontinue the investigation, or to impose a fine or to approve a settlement with the parties, etc.

The parties can also negotiate a settlement with the Secretariat (see the answer to question 6.1).

Once drafted, the motion is circulated to the parties to the investigation for comments.

1.5 Are there any sector-specific offences or exemptions?

No. To the extent that the regulatory framework does not permit competition, that sector is exempted from the cartel prohibition.

1.6 Is cartel conduct outside your jurisdiction covered by the prohibition?

To fall under the jurisdiction of the CA, it is sufficient that the alleged conduct has potential effects in Switzerland. It is not necessary that such effects are direct, substantial or reasonably foreseeable. 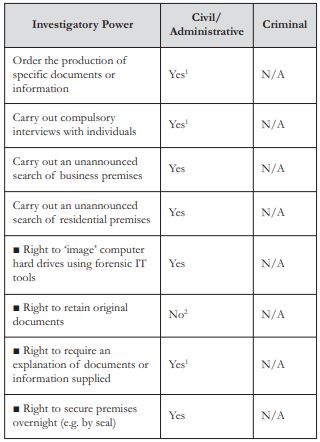 2.2 Please list specific or unusual features of the investigatory powers referred to in the summary table.

Unannounced inspections of the Secretariat require the approval of the president of ComCo and not of a court.

No, there are none.

2.4 Are there any other significant powers of investigation?

There is a cooperation agreement in place between Switzerland and the European Commission which allows for the exchange of confidential information.

2.5 Who will carry out searches of business and/or residential premises and will they wait for legal advisors to arrive?

The Secretariat carries out unannounced searches. It is typically accompanied by the police and a neutral person (notary). The Secretariat does not wait for legal advisors to arrive.

2.6 Is in-house legal advice protected by the rules of privilege?

2.7 Please list other material limitations of the investigatory powers to safeguard the rights of defence of companies and/or individuals under investigation.

Undertakings enjoy the privilege against self-incrimination (Article 6 ECHR). They may refuse to produce documents, to explain documents and to provide information relating to the alleged conduct. Arguably this privilege goes farther that the privilege against selfincrimination as interpreted by the European Court of Justice which considers that "purely factual" questions have to be answered. However, the Federal Administrative Court has held that undertakings would have a duty to provide turnover data that are the basis to calculate the fines.

2.8 Are there sanctions for the obstruction of investigations? If so, have these ever been used? Has the authorities' approach to this changed, e.g. become stricter, recently?

Yes. Obstruction of an investigation (beyond the privilege against self-incrimination) has been taken into account as an aggravating circumstance when calculating the fine. For example, the fines of undertakings that deleted or moved aside documents during an unannounced inspection, were increased by 10%. The authorities' approach has not changed in the last years.