The Board granted a petition for cancellation of a registration for the mark CAPTAIN CANNABIS for comic books, on the ground of likelihood of confusion with Petitioner Laverne J. Andrusiek's identical mark, for which he claimed prior use for comic books. The parties agreed that the marks are confusingly similar. Andrusiek's "actual" trademark use on comic books did not begin until 2017, but from 2006 he used the term as the name of a character, which the Board accepted as use analogous to trademark use, leading to the award of priority to Andrusiek. Laverne J. Andrusiek v. Cosmic Crusaders LLC and Lewis J. Davidson, Cancellation No. 92064830 (September 6, 2022) [not precedential] (Opinion by Judge Frances S. Wolfson). 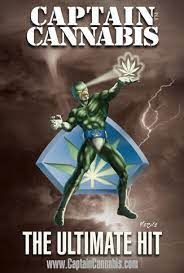 "The analogous use doctrine allows a party to claim priority as of when it is established that the mark is associated in the mind of the consumer with a source for the goods." Cent. Garden & Pet Co. v. Doskocil Mfg. Co., 108 USPQ2d 1134, 1145 (TTAB 2013). However, "actual trademark use must follow the analogous use within a commercially reasonable period of time."

Respondent Davidson was entitled to rely on the April 2, 2014 filing date of his underlying application as his date of constructive first use. For what it's worth, Davidson tried but failed to prove a first use date in 2013.

Beginning in 1999, Andrusiek promoted "Captain Cannabis" as the name of a character in an adult animated series that was "in development." In that year he also registered the domain name "captaincannabis.com." He sold copies of comic books featuring the character and displayed the comic books at a comic convention. He also received some media attention. The evidence suggested that by 2013-2014, Andrusiek's CAPTAIN CANNABIS mark was "reasonably well-known within these [niche] communities, even if the numbers are not large in absolute terms, and was reasonably well-known prior to Respondent's priority date."

Petitioner's mark had received regional and national attention in niche publications and media, and Petitioner had promoted its mark on a national level, including through trade shows, social media, and the Internet. We find that the evidence considered in its entirety establishes that Petitioner garnered sufficient notoriety from his pre-sales activities to support a finding that his analogous use "is of such a nature and extent as to create public identification of the target term with the [petitioner's] product."

Petitioner's testimony and documentary evidence demonstrate that he has been selling the "420" comic book that included the CAPTAIN CANNABIS character continuously since 2006 to the present, including during 2013-14, and that by 2017, Petitioner sold comic books under the mark CAPTAIN CANNABIS. We find Petitioner's actual trademark use in 2017 to be within a commercially reasonable period of time following his analogous use in 2013-14 so as to create a "continuing association of the mark" with Petitioner's goods.

Viewing the evidence as a whole, "as if each piece of evidence were part of a puzzle," the Board found that "when fitted together," the puzzle pieces established prior use by Andrusiek. And so the Board granted the petition for cancellation.