Most Popular:  Article South Africa, May 2021
To print this article, all you need is to be registered or login on Mondaq.com.

The month of April was a watershed moment for the broader East African region as reports confirmed that Uganda had signed off on the Final Investment Decision with oil companies Total and CNOOC. This investment will see billions in foreign investments flood into the country's promising oil and gas sector. Most importantly, it will finally allow for the construction of the long awaited East African Crude Oil Pipeline, a 1440km construction that will stretch from Western Uganda to Tanzania's Indian Ocean Port of Tanga. The development of the pipeline will allow Uganda to begin unlocking its vast energy potential and exporting to international markets. Once complete, the pipeline will provide opportunity to develop supporting sectors, particularly the transport, infrastructure and logistics sectors, where inefficiencies have long hampered export growth. 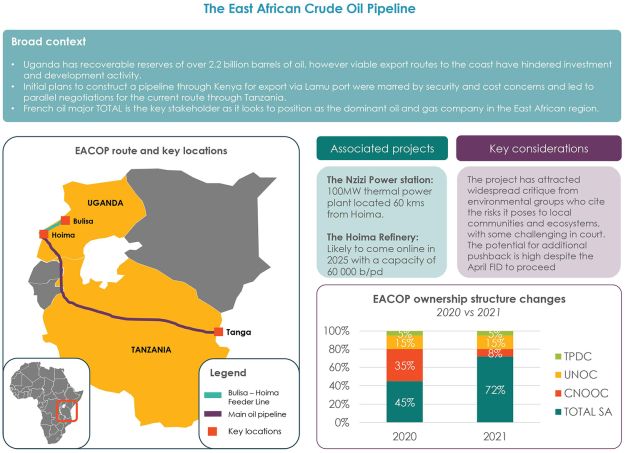 4. African Oil and Gas in upswing as operations and investment flow restart

The prolonged down period that started in 2020 led foreign investors to withdraw or delay final investment decisions on oil and gas projects. However, a number of developments in March point to a gradual return to activity. The Nigerian government announced that it would be spending US$1.5 billion on the rehabilitation of the Port Harcourt refinery, while also signing 5 MOU's with Morocco to collaborate on initiatives in the hydrocarbon, agriculture, and chemicals sectors. Looking east, though the construction of the new US$3.5 billion East African Oil Pipeline is set to commence, over 260 civil society groups worldwide have petitioned against the project, leading France's Total and South Africa's Standard Bank to the discussion table in easing local and international concerns. Further south in Mozambique, global logistics company Grindrod noted in March that it hopes to soon complete construction of a key logistics hub in serving the needs of planned oil and gas facilities in the region.

The world's most dynamic geothermal market will soon witness the entry of a new player. The government of Djibouti announced in March the establishment of its own national geothermal energy engineering company, the Red Sea Drilling Company. The state-owned entity will not work to exploit the country's own geothermal power reserves initially but will rather seek to cultivate the training of local technicians and engineers. According to spokespeople the company will work to first develop its skills in water drilling before moving on to large-scale geothermal projects. The government hopes for the company to eventually become a regional player involved in drilling operations in Kenya, Ethiopia and even Somalia. The east African region's unique geological makeup places it as a world leader in the global renewables industry, with the potential to meet the energy needs of countries in the region, aspiring to increase the installed capacity of geothermal energy to over 2,500MW by 2030.

The so-called Risk Mitigation Independent Power Producer Procurement Plan closed in late December last year and attracted a total of 20 bid responses, eight of which were selected for a final generation total of 5,117MW to be introduced into the grid by August 2022. One successful bidder was Turkish company "Karpowership" which will supply South Africa with three floating facilities for adding emergency power into the grid. Other bids included more sustainable long-term projects such as the innovative Oya Energy Hybrid facility at Matjiesfontein. This one-of-a kind setup combines wind, solar and battery storage, and will produce 128MW of power, falling into one of three "renewables development zones" earmarked by the government toward reducing the country's dependence on coal power. According to research the country is one of the most suitable for a holistic renewable energy mix, with some estimates suggesting that offshore wind turbines alone could supply up to 800% of energy needs. 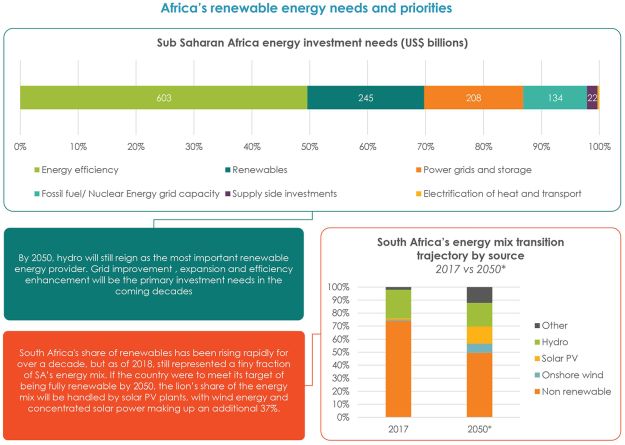 Two smart city developments made waves over the course of March as Egypt eyes a move to a new complex outside Cairo, and South Africa announced its long-term plan for three new cybertropolises. The Egyptian government is hoping to soon finalise construction for its new smart city simply dubbed the "New Administrative Capital". Designed to operate away from the cluttered cityscape of Cairo, it will feature universities, leisure facilities and a diplomatic quarter, and is projected to house 6 million people. The government will take occupancy in the coming months and once the current electric train and monorail constructions are complete, the city will be officially opened. South Africa for its part too has announced the construction of three new smart cities to take place in the coming years, with each set to be located close to important transport hubs such as Lanseria Airport, the Durban Airport and the Mooikloof region east of Pretoria. 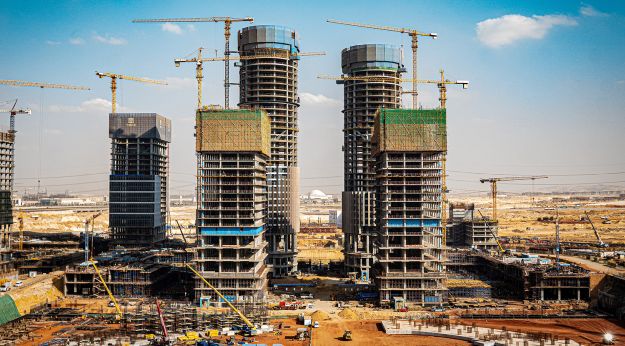 The CBD of Egypt's new administrative capital under construction in Oct 2020. Aside from key amenities the city will reportedly boast 90 square kilometers of solar energy farms, an electric railway link with Cairo and a new international airport. Image courtesy: Youssef Abdelwahab/UNSplash

Struggling air carrier South African Airways has gained a new lease on life after news surfaced that its business rescue process has successfully concluded with the company now being 'both solvent and liquid'. The practitioners' achievements are quite phenomenal, with negotiations with concurrent creditors having reduced the airline's liabilities from US$2.3 billion to US$153 million. This has however come at a heavy cost for the company's workforce who saw their numbers decline from 4 700 to 1 000 after voluntary severance packages were negotiated. There's still a long road ahead before the airline flies again with creditors still needing to elect a figurehead to lead the implementation of the rescue plan, which will cost around US$686 million. Thereafter, the company will need to find new investors which in itself will be a difficult feat in a precarious global environment for the aviation industry. 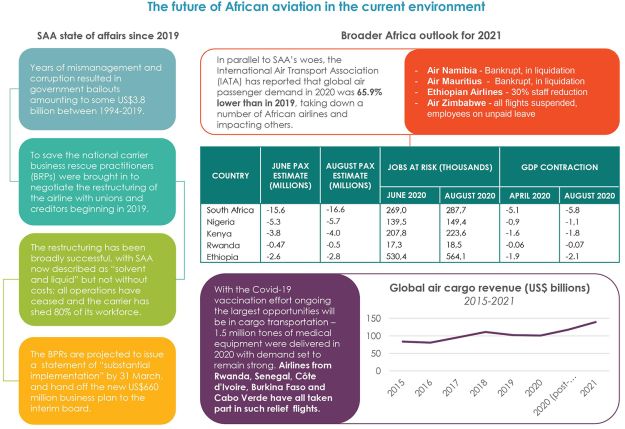 March saw a shakeup in the Nigerian tech space as some established players, including Farmcrowdy, moved to leave the crowdfunding space in the face of new regulations. Crowdfunding as a source of investment has become immensely popular in a country where bank loans are difficult to come by. Agricultural startups were particularly successful and platforms such as Farmcrowdy and ThriveAgric emerged to cater for their needs. However, these platforms suffered from a lack of regulation which made them easy to abuse by financial fraudsters. Proposed changes suggested by the Nigerian Securities and Exchange Commission in April 2020 are now coming into effect, placing strict new requirements for crowdfunding platforms to adhere to. Companies without transparent ownership will no longer qualify for crowdfunding and firms will have limits on how much they can raise. Crowdfunding platforms themselves will have to register as intermediaries and are now also obligated to perform due diligence around those that use their services.

10. IMF in talks with Zambia as court rejects state attempts to seize CEC

The International Monetary Fund (IMF) announced early in the month that some progress had been made regarding the negotiation of a debt relief programme for Zambia, though it cautioned that some obstacles remained. The country has served as a textbook case for the continent's debt crisis, even prior to the Covid-19 pandemic, with some US$6 billion owed to Eurobond holders and Chinese state entities. A standstill in negotiations between stakeholder groups made restructuring impossible until Zambia approached the IMF's Common Framework for Debt Treatment for debt and Covid relief in 2020. International concerns of potential nationalisation of local mines in curbing the growing debt levels have also been slightly abated by the Zambian High Court's decision not to allow the state to seize CEC, a local independent power producer, which had been expropriated from the mining industry during the peak of Zambia's financial woes last year.

Mahama admits defeat after Ghana court upholds president's election victory
A Ghanaian court has upheld President Nana Akufo-Addo's re-election victory after the results of the polls were questioned by runner-up John Mahama who claimed election irregularities. The court decision has fortunately been accepted, paving the way for a smooth transition of power. The occurrence comes as an ironic throwback to the 2012 election outcome and the resulting legal fallout which saw the two candidates' roles reversed.

Ethiopian prime minister admits atrocities, Eritrean involvement in Tigray conflict
The United Nations and United States delivered a stiff rebuke to the Ethiopian in March, requesting that it bring an immediate end to the conflict that has been raging in the Tigray region since the government led offensive against rebels from the Tigray People's Liberation Front (TPLF) began in November 2020. Allegations of gross human rights abuses and involvement by Eritrean troops from across the border have mounted, with two charges which Ethiopian prime Minister Abiy Ahmed has admitted to, albeit in a downplayed manner. Speaking at a conference earlier in the month he acknowledged that atrocities had taken place but emphasized that the TPLF were exaggerating claims of ethnic cleansing.

Zulu King Goodwill Zwelithini passes away
Mourners gathered to pay homage to King Goodwill Zwelithini, monarch of South Africa's largest ethnic group, the Zulu. King Zwelithini was the longest reigning in the monarchy's history, having served for the last 53 years. Though his role was largely ceremonial within South Africa's apartheid and post-apartheid political structures the king played was active in the country's politics, helping to establish the Inkhata Freedom Party which continues to dominate politics in the Zulu speaking parts of the country. He is succeeded by his third wife, Queen Mantfombi MaDlamini Zulu, as regent fuelling speculation that her son, Prince Misuzulu, will be the chosen successor.