by Jennifer L. Kovalcik
Stites & Harbison PLLC
Your LinkedIn Connections
with the authors

It seems everywhere I look, I see stores, gas stations, mall kiosks and even boutiques in Gatlinburg selling Fidget Spinners. Every kid I know has one (or probably more than one). So is FIDGET SPINNER a type of toy or a brand?

If you are not yet familiar with Fidget Spinners, then you must live in a retirement community or post land where kids are not allowed. Fidget Spinners are small, palm-sized devices with two or three weighted arms. You can pinch the center of the spinner with your thumb and index finger and then spin it. Because the arms are weighted, it will continue to spin for quite some time. Yep, that's it. It just spins. The purpose is to promote calm and focus. I have even seen adults with their own Fidget Spinners. I have to admit I pick up my kids' Fidget Spinners on occasion.

Fidget Spinners now come in a swath of colors and designs, with NFL and college team logos, super heroes, and other licensed characters. Here are some examples available at the NFL Shop [Go STEELERS®!]: 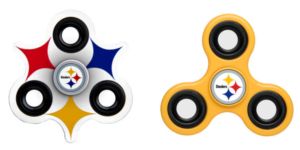 After kids started getting interested in these stress-relieving devices, stores couldn't keep them in stock fast enough. It's no surprise that a flurry of trademark applications were filed by different people trying to capitalize on the name FIDGET SPINNER. They didn't do it fast enough. The world was already calling all toys of this variety of spinning toy FIDGET SPINNERS.

In the last few months, nine different folks filed federal trademark applications to try to claim exclusive trademark rights to the name FIDGET SPINNER. The first was filed on March 1, 2017, Serial No. 87/353,729. The Trademark Office refused registration on the ground that the name FIDGET SPINNER was widely used by others to refer to the type of toy such that the words could not qualify as a trademark brand. The applicant has not yet responded, but it appears the application will spin out.

A simple Google® search reveals a lot of third party use of FIDGET SPINNER as a noun to identify the generic type of toy involved. There is even a Wikipedia page dedicated to the Fidget Spinner. If the first company to market a Fidget Spinner was thinking about trademarks, they should have marketed the toy name FIDGET SPINNER [adjective] along with the wording they wanted people to use for the type of toy [noun], perhaps "FIDGET SPINNER brand of hand spinners or spinning toy. It might not have saved them, but it would at least have given them a shot to try to develop rights in the words. Other examples of marks fighting against use of their brand names as generic nouns include BAND-AID® , with advertising focused on getting consumers to know they are the BAND-AID brand of bandages, and Coca-Cola, working to ensure that COKE® is not generically used for all types of soda, especially its rival PEPSI®.

In the meantime, embrace the craze and try a Fidget Spinner yourself. You might just like it. The STEELERS® Fidget Spinners above cost less than $10, but there are some crazy expensive Fidget Spinners out there for the serious connoisseurs.