In a 74-page opinion, the Board sustained oppositions to registration of the marks shown below, for "energy drinks containing caffeine; energy drinks not for medical purposes" and for "alcoholilc beverages" on the ground of likelihood of confusion the registered mark DUTCH BROS. for coffee and energy drinks. FWIW, the Board rejected opposer's claim of a family of "DUTCH" marks, and found that opposer's "conjoint use" claim (the mark DUTCH and a windmill design mark) was not pleaded, was not tried by implied consent, and was not proven. Dutch Bros., LLC v. Denco Horeca Beheer B.V., Oppositions Nos. 91253828 and 91264452 (November 14, 2022) [not precedential] (Opinion by Judge Martha B. Allard). 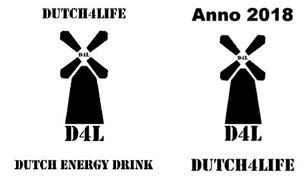 After the rejection of opposer's family of marks and conjoint use claims, the case boiled down to a likelihood of confusion analysis between the two proposed marks and the word mark DUTCH BROS.

The Board found the involved goods to be in part identical and otherwise related, as evidenced by third-party registrations and uses. The goods are sold in the same channels of trade to the same classes of consumers. The parties' goods are both relatively inexpensive products that may be purchased on impulse rather than selected with careful consideration.

The Board found the DUTCH BROS mark, registered under Section 2(f), to be conceptually weak but commercially strong. Opposer began using the mark in 1992 and has over 400 locations, "making it the largest, privately held, drive-through coffee company in the country at the time of trial." It has spent substantial sums on promotion of the mark and has received extensive media coverage.

Finally, as to the marks, the Board found that literal element DUTCH4LIFE to be the dominant element in each of applicant's marks. The term "Anno 2018," which means "in the year 2018," is merely descriptive and is disclaimed, and therefore carries less weight than DUTCH4LIFE.

[W]e find that the parties' marks are similar in sight and sound to the extent that they both share the DUTCH element. Although Applicant's mark includes the "4LIFE" component, this component reinforces the element DUTCH. Because the Applicant's marks are used with legally identical and related goods, there is no reason to conclude that the term DUTCH would have a different meaning or connotation and, indeed, neither party offers any evidence along this line. Accordingly, this factor weighs in favor of a likelihood of confusion.

And so, the Board sustained both oppositions.