by Kristina D'Angelo and Catherine M.C. Farrelly
Frankfurt Kurnit Klein & Selz
Your LinkedIn Connections
with the authors
To print this article, all you need is to be registered or login on Mondaq.com.

Since its creation in the 1980s, the Rubik's Cube puzzle has become one of the best-selling – and depending on who you ask, one of the most frustrating – toys in the United States. Rubik's Brand Limited ("Rubik's"), a London-based company, currently owns the trademark registration for the traditional design of the iconic Rubik's Cube. This federally-protected trade dress consists of a black cube base with nine cubes on each side; each side is a different solid color. In 2016, Flambeau, Inc. ("Flambeau"), a Wisconsin corporation, began selling its own 3x3 puzzle cube, the Quick Cube. The Quick Cube, however, has a white base and fluorescent color patches on its sides.

On August 28, 2017, Rubik's filed a complaint with the U.S. District Court for the Southern District of New York for several claims, including federal trademark infringement, false designation of origin, and trademark dilution. Rubik's sought injunctive relief and monetary damages. In response, Flambeau asserted an affirmative defense of non-infringement and also sought to cancel the Rubik's Cube trademark registration on the grounds of functionality and fraud. Importantly, Flambeau argued that the Rubik's Cube trade dress is both utilitarian and aesthetically functional. Flambeau moved for summary judgment, and Rubik's opposed the motion and requested the court grant summary judgment on its own claims.

On January 31, 2021, Magistrate Judge Katharine H. Parker issued a Report and Recommendation, agreeing with Rubik's that the trade dress is not functional. Judge Parker recommended that Flambeau's counterclaim and affirmative defenses claiming trademark invalidity should therefore be dismissed as a matter of law. On utilitarian functionality grounds, Judge Parker noted that while individual elements of the Rubik's Cube design are functional and would not be eligible for protection on their own, the unique combination and arrangement of these elements – their overall impression – were not functional. Flambeau did not prove that the Rubik's Cube's black grid and specific Pantone colors were essential to the purpose of solving the puzzle. Additionally, Flambeau also did not provide evidence that the Rubik's Cube design affects the cost or quality of puzzle cubes. On aesthetic functionality grounds, Judge Parker stated that protecting the Rubik's Cube trade dress would not put competitors at a disadvantage in the puzzle cube market. Judge Parker noted that the trade dress was limited to a black base with "specific Pantone color numbers highlighted in RBL's style guide," and that competitors could develop puzzle cubes with a different color plastic base and different colored sides.

While Judge Parker recommended summary judgment on the functionality issue, she did find that there was a genuine dispute of material fact as to whether Flambeau's Quick Cube actually infringed Rubik's trademark rights. Because Judge Parker's finding is a report and recommendation, the decision will not take effect until District Judge Paul G. Gardephe reviews the case and issues an order rejecting or adopting this report and recommendation. Whether you're a competitive speed cuber or a recreational puzzle cube fan, it will be interesting to see Judge Gardephe's decision and the effect that this will have on trade dress protection. 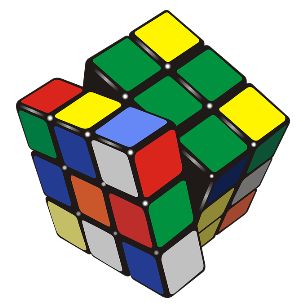