The Situation The legal uncertainty surrounding patent subject matter eligibility under Section 101 of the United States Code ("35 U.S.C. § 101") has been the subject of much attention, as it has become difficult for stakeholders to determine what subject matter is patent eligible, particularly in the area of computer software.

Looking Ahead The guidance will likely lead to more consistent results in patent prosecution.

The guidance clarifies how patent examiners determine whether a claim is patent eligible under the U.S. Supreme Court's Alice/Mayo test.

First, the guidance provides greater clarity as to what constitutes an "abstract idea." It identifies the abstract idea exception as subject matter included in the following three enumerated groupings:

Mental processes: Concepts performed in the human mind (including an observation, evaluation, judgment, or opinion).

The guidance makes it clear to examiners that a claim should not be treated as reciting an abstract idea unless it recites subject matter that falls under the enumerated groupings. However, an examiner "in rare circumstances" has the discretion to treat a claim as reciting an abstract idea even when it does not fall within the enumerated groupings.

Furthermore, the guidance provides several examples in which a judicial exception has not been integrated into a practical application:

The guidance emphasizes that in both prongs of the analysis at Step 2A, examiners should exclude consideration of whether the additional elements represent well-understood, routine, conventional activity. These factors only become relevant at Step 2B.

The procedure evaluates "integration" early on in Step 2A and specifically delays, until Step 2B, the analysis of well-understood, routine, conventional activity.

The following diagram illustrates the procedure that the examiners should employ: 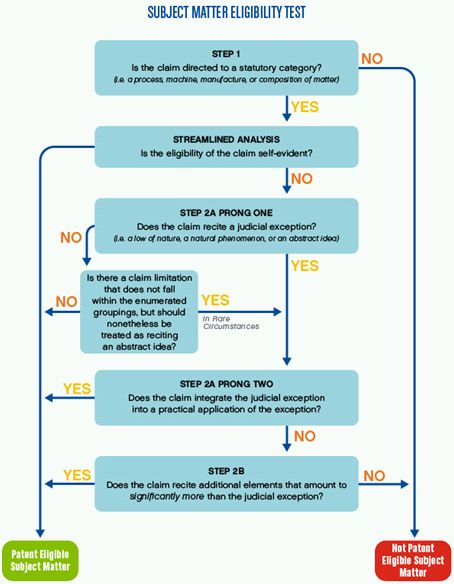