by Gourdin W. Sirles
Proskauer Rose LLP
Your LinkedIn Connections
with the authors

Last year, a jury awarded Brigham and Women's Hospital ("BWH") approximately $10 million after it found that defendant Perrigo Company's ("Perrigo") generic version of Pepcid® Complete® willfully infringed BWH's patent. After the verdict, Perrigo filed a renewed motion for judgment as a matter of law or a new trial under Fed. R. Civ. P. 50(d) and 59(d). Although the District Court initially denied the motion on timeliness grounds, the Federal Circuit reversed on that issue and "instructed the court to consider the pending post-judgment motions."

Recently, the District Court entered its order on the merits of Perrigo's post-trial motion, vacating the jury's finding of infringement as a matter of law and undoubtedly providing Perrigo with some "sustained," if not "immediate" relief from last year's verdict.

The asserted claims in BWH's patent required, among other things, the accused generic product to provide "immediate and sustained relief" from "pain, discomfort and/or symptoms associated with episodic heartburn which starts within about 5-10 minutes following ingestion . . . and continues for at least about 4-6 hours." BWH's infringement case (including as to this element), relied on "indirect evidence," including "bioequivalence data from Perrigo's [Abbreviated New Drug Application]" and studies related to Pepcid® Complete®. In essence, BWH relied on evidence relating to its own product to show that the generic product infringed, because the two products are bioequivalents. The Court expressed no concerns about BWH's method of proving infringement in general, but noted that BWH "could only prevail if it proved that its product [Pepcid®] meets all the claim limitations."

The Court determined that BWH failed to do so for the "immediate and sustained relief" claim limitation. BWH's evidence for this element was based on one figure in a study, which illustrated that pH levels in the esophagus "rose rapidly" in the first five minutes after the participants took the drug (see bold solid line below): 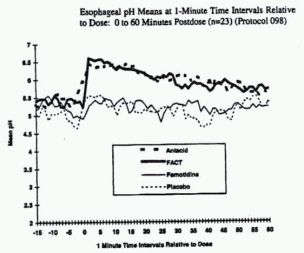 According to BWH, such increased pH levels demonstrated "immediate and sustained relief" because it indicated reduced acidity levels within 5-10 minutes of taking the drug. As it turns out, however, none of the subjects represented in the figure were experiencing heartburn symptoms at the time of the study. So, while the study may have provided evidence of an immediate result from the drug, it did not show immediate relief from heartburn. Because BWH had no other evidence on this claim element, the Court overturned the jury verdict of infringement. The Court noted that, in the event this determination is overruled on appeal, a new trial on infringement is warranted because "the jury's verdict is against the clear weight of the evidence."

Although it may be cold comfort to BWH, the Court also upheld the validity of the patent, affirming the jury's finding of no anticipation or obviousness.