by   Orrick and Scott Morrison
Orrick
Your LinkedIn Connections
with the authors
To print this article, all you need is to be registered or login on Mondaq.com.

The EC Regulations on Insolvency Proceedings (the "EIR") came into force throughout the European Union (the "EU") (except Denmark) on 31 May 2002 with the purpose of setting out the rules governing where in the EU insolvency proceedings should be opened, which law applies to the proceedings and to ensure that such proceedings are recognised across the EU.

EIR provided that a company should file in the jurisdiction where its center of main interest or "COMI" is located and that there was a rebuttable presumption that this is the jurisdiction of incorporation. This led to a number of EU groups filing in the jurisdiction of the head office – for example the Rover Group had many offices around the EU but its insolvency process was run out of the UK. In addition groups frequently file where it is apparent that an insolvency procedure in a particular jurisdiction may have some advantages, for example the Eurotunnel group which has English and French companies which operate the tunnel filed in France to take advantage of a French insolvency procedure. It is often the case that European groups avail themselves of English scheme and administration procedures.

In over 10 years of insolvency practice in the EU the benefits of this experience has led to a new Recast Regulation on Insolvency 2015/848 (the "Recast Regulation"), which was published by the European Parliament and Council on 20 May 2015. It came into force on 26 June 2015 and applies to relevant insolvency proceedings from 26 June 2017.

This client alert addresses the key features of the Recast Regulation:

Large corporate groups which operate across the world often work via divisional or product lines, not strictly under jurisdictional lines. The corporate form of each company within a group is often not seen as paramount in the minds of managers and employees. If a group which operates primarily in the EU goes insolvent, however, often it rapidly becomes apparent that the EU has no harmonised insolvency law. In life, groups may operate across borders but in death, the laws of the jurisdiction of incorporation govern the conduct of the insolvency proceedings.

Despite their voluntary nature, group coordination proceedings may be a useful tool in modern European insolvencies and we expect insolvency practitioners to make use of the procedure. The inception of group proceedings mirrors developments elsewhere in the world, where insolvency practitioners have been grappling with the problem of distributing the assets of large multi-national groups fairly since the 2008 crash.

The type of situation in which group coordination proceedings may be useful is illustrated by recent developments in the US, UK and Canada in connection with the Nortel group insolvency. Nortel was a multinational telecommunications company, with operations and employees across the globe. By far the most valuable group assets were its intellectual property rights, which were held almost entirely by its Canadian parent. In order to achieve the best value for the assets a coordinated approach for the disposal and in particular distribution of the proceeds was necessary. In consistent judgments delivered on 12 May, the Delaware Bankruptcy Court and Ontario Superior Court ordered a pro rata allocation of funds from the sale of the Nortel group's assets amongst the creditors of the group as a whole. This helped to achieve a fair result in circumstances where assets and liabilities were asymmetrically distributed across the group. The establishment of a European framework for dealing with similar situations is welcome.

The establishment of a procedure for agreeing to resolve intra-group claims at a group level is also welcome. The potential for costly and time-consuming intra-group claims is illustrated by the Lehman Brothers administration, which has generated a sobering volume of litigation which continues to be fought in the English courts and abroad. Agreeing a framework for timely resolution of intra-group claims has the potential to greatly benefit creditors.

The group coordination scheme is not binding and may lack teeth. It also has the potential to add additional delay and expense to proceedings, although this is mitigated by the opt-out provisions. Nevertheless, the new procedure may be helpful as a means of confronting the difficulties associated with multinational group insolvencies.

Alongside the new procedure, Articles 56 – 58 of the Recast Regulation impose requirements on all parties including courts and insolvency officeholders to cooperate and to consider whether possibilities exist for restructuring the group. Significantly, an insolvency officeholder over one group member may be heard in any proceedings in respect of another group member, and may request up to a six month stay of any realisation measure as regards its assets.

To combat this issue, the concept of "synthetic" secondary proceedings has been introduced. In order to avoid the opening of secondary proceedings, the insolvency officeholder may give an undertaking that he will distribute assets in accordance with local distribution and priority rules in the jurisdiction where those proceedings could be opened. This can only be done with the approval of local creditors in the jurisdictions other than the one where the debtor has its COMI.

This procedure reflects that used by English officeholders, for instance in the MG Rover insolvency, albeit creditors will be able to force through the opening of secondary proceedings if they wish.

A notable exception from the broadened scope of the Recast Regulation is the UK scheme of arrangement, which remains outside EIR. The status of the UK scheme was hotly debated during the course of negotiations, with the prevailing EU view being that it should be recognised as a pre-insolvency procedure.

The exclusion of schemes from the Recast Regulation is double-edged. Schemes retain their uncertain position on the continent. In particular, following the decision of the German Federal Court in the case of Equitable Life1, practitioners should be aware that a scheme of arrangement may not be capable of being recognised by the German courts. Equitable Life turns on its own facts, and the door to enforcement of a scheme in Germany has by no means been shut by the Federal Court's judgment, but the scheme will continue to give rise to debate on the continent by virtue of its position on the fringes of European insolvency proceedings.

On the positive side, the exclusion of the scheme will be welcome for corporates who wish to take advantage of the flexibility of a UK scheme and avoid the taint of insolvency proceedings. In particular, the English courts will continue to apply the increasingly flexible 'sufficient connection' test when considering whether to accept jurisdiction over a scheme, and will not be bound by the restrictions in the Recast Regulation, as confirmed in the recent judgment in Re Van Gansewinkel Group B.V2.

COMI is for the first time defined in the body of the Recast Regulation as "the place where the debtor conducts the administration of his interests on a regular basis and which is ascertainable to third parties"3. There is a presumption that COMI is situated in the jurisdiction of the company's registered office, although this is rebuttable if the company's central administration is located elsewhere or a comprehensive assessment of all relevant factors suggests a different COMI.

One aim of the Recast Regulation was to prevent abusive forum shopping, and to this end the presumption in favour of the jurisdiction of registration does not apply if the registered office was shifted within three months of insolvency. Whether this will have any impact is open for debate: practically, COMI shifts are generally effected by moving the company's central administration rather than its registered office (see Figure 1). 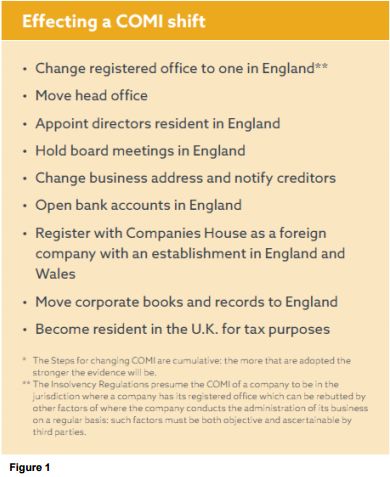 The Recast Regulation contains sensible procedures for achieving its aim of facilitating the efficient conduct of cross-border insolvencies. In the context of insolvency proceedings, the creation of powers to avoid the need for secondary proceedings and inception of group coordination measures are welcome. This will hopefully lead to increased cooperation between courts in different member states along the lines of that seen between the US and Canada in Nortel. Meanwhile, the exclusion of schemes from the ambit of the regulation maintains the status quo and UK schemes will remain a popular alternative to traditional insolvency proceedings.

3 The most significant decision on COMI to date is the judgment of the European Court of Justice (ECJ) in Re Eurofood IFSC Ltd (C- 341/04)[2006] Ch. 508; [2006] E.C.R. I-383; [2006] B.C.C. 397; [2006] All ER (EC) 1078. The ECJ acknowledged that there is a statutory presumption that the COMI is located in the place where the debtor has its registered office which " can be rebutted only if factors which are both objective and ascertainable by third parties enable it to be established that an actual situation exists which is different from that which locating it at the registered office is deemed to reflect".