Fiduciary relationships involve the delegation of authority to an agent who is charged with investing assets for the benefit of third-party beneficiaries. However, the beneficiaries rarely possess both the information and expertise to evaluate the integrity and effectiveness of the agent's management services in a timely way, even though the beneficiaries are forced to rely on them. Fiduciary duties are the legal principles that protect beneficiaries and society from being taken advantage of by these fiduciary agents. While local culture and legal structures influence how fiduciary principles are expressed, due care in managing the assets and dedication to serving beneficiaries' interests are key to this relationship of trust (Richardson, 2011).

The practices used to implement these fiduciary principles typically evolve over time in response to changing circumstances and knowledge. Given the changes that have occurred in the global economy over the past 40 years, including responsibility for greater amounts of assets being delegated to fiduciary agents, increased resource constraints from rising populations and growing prosperity and soaring costs from the effects of pollution and climate change, fiduciary standards are once again in flux. Because environmental issues and climate risk are global matters which cross national borders, have financial implications and involve fiduciary issues of intergenerational fairness, they have become a major focus of the current international evolution in fiduciary thinking.

This paper explores the importance of guiding legal principles in protecting beneficiaries and society from abuse of delegated investment powers by fiduciary agents. It argues that countries that can most effectively navigate the transition to modern and sustainable fiduciary investment practices will be able to allocate capital more efficiently, reduce the negative side effects of investment practices and have a long-term competitive advantage in the 21st century. Given the growing economic significance of China's pension funds, the National Social Security Fund and other assets managed by delegated agents on behalf of third-party beneficiaries, this could be an opportune time to establish culturally appropriate fiduciary principles for China. Pension funds in South Africa, the Netherlands, Norway and the United States offer models for the People's Republic of China (PRC) to consider in planning its transition to fiduciary standards and investment practices that support sustainable development.

1.0 The International and Historical Origins of Fiduciary Duties

While the proliferation and complexity of investment fiduciary relationships is a relatively recent phenomenon from the 20th century, the basic concepts of fiduciary duty are ancient. In fact, the English word "fiduciary" has its roots in the Latin word "fiducia," which means both "trust" and "confidence."1

Today's fiduciary duties have historical roots in China that can be traced back to Confucius (whose questions of self-examination included whether, when acting on behalf of others, one has always been loyal to their interests) and to the Great Qing Legal Code (where criminal punishment was provided for one who receives deposit of property of another and consumes it without authority) (Aikin & Fausti, 2010–2011). Outside of China, historians attribute the origins of fiduciary concepts to the Code of Hammurabi (~1790 BC) in Babylon on the role of agents entrusted with property, medieval English trust law, 5th century Islamic laws on family and charity and 4th century Roman efforts to avoid legal restrictions on inheritance (Aikin & Fausti, 2010–2011; Avini, 1996). Those early fiduciary arrangements typically involved transferring the ownership of assets to a third-party agent who would manage the assets to achieve specific wishes of the grantor, for example, to take care of family members, pursue charitable purposes or hold it for the benefit of someone else where necessary to avoid legal restrictions on the transfer of property (Avini, 1996).

Today, investment fiduciary relationships also involve delegation to an agent of discretionary management responsibility for particular assets in order to provide future benefits to one or more third-party beneficiaries or specified purposes. Such relationships are based on a high level of trust and confidence in the agent. Fiduciary duties supply rules which guide the agent's implementation of those delegated responsibilities, with the goal of ensuring that the fiduciary faithfully fulfills its obligations (Sarro & Waitzer, 2012). However, there is no universal definition of fiduciary duty. Concepts of fiduciary duty cross the boundaries of different fact situations, legal systems and cultures, making a single global definition impossible (Krikorian, 1989).

Despite the local distinctions that create nuances of fiduciary duty in each jurisdiction, there are common dynamics at play in investment fiduciary relationships, regardless of the culture or jurisdiction. These issues must be resolved in some manner, whether intentionally or by default. The primary challenge is that investment fiduciary relationships typically leave beneficiaries and society vulnerable to abuse at the hands of the fiduciary Sarro and Waitzer, 2012). For example:

Given these vulnerabilities, it is evident why fiduciary relationships are based on trust and confidence. Fiduciary duties are intended to supply the standards needed to protect beneficiaries and society from being taken advantage of in fiduciary relationships. However, fiduciary duties arise within the context of local culture, legal systems, authorizing statutes, regulations, practice codes and court decisions.

Even though fiduciary standards may vary in how they are applied between jurisdictions, there are consistent themes. Table 1 provides a representative list of common law fiduciary duties and civil law principles that guide the governance and investment practices of institutional investment fiduciaries across the globe (Freshfields Bruckhaus Deringer 2005; 2009). Fiduciary duties focus on process and behavior, rather than investment outcomes. Despite variations in wording, fiduciary principles in most jurisdictions address:

Within the context of these guiding fiduciary principles, there are differences between jurisdictions in institutional investor structures and how fiduciaries function. For example, common law jurisdictions tend to operationalize fiduciary relationships through trusts and provide greater interpretive discretion to judges, while civil law countries are likely to use a contractual arrangement with a financial institution or management company and focus more on specific regulatory guidance than principles (Stewart & Yermo, 2008).

However, there are a growing number of exceptions to this traditional divergence. In the United States, insurance companies sell annuities and other pension products under a contractual structure, without accepting trust law fiduciary responsibilities. Even in the UK, investment managers hired by pension boards to manage assets are treated as contractors and not considered fiduciaries, unless bound as such by contract (Freshfields Bruckhaus Deringer, 2005; Berry, 2011). Conversely, by one count, over 40 civil law jurisdictions (including the PRC) have explicitly adopted common law trust statutes and related fiduciary duties for some purposes (Honoré, 2008).

Table 2 illustrates how fiduciary duty flows through common law and civil law systems. While the structures and operational systems can be very similar, they can also be quite complex. As noted above, different entities even in the same jurisdiction can fall under different regulatory and legal systems. For instance, insurance companies and mutual funds might be seen as contractors while pension funds and sovereign wealth funds are trust fiduciaries. Regardless of the category (civil law, common law, contract or trust), governance and investment practices are available for implementation to protect beneficiaries and society from fiduciary misconduct or irresponsibility (Honoré, 2008; de Graaf & Johnson, 2009).

Indeed, governance and implementation practices of institutions that function as investment fiduciaries are essential aspects of fulfilling fiduciary duties. Fiduciary responsibility and fiduciary governance are opposite sides of the same coin. Fiduciary duties are of no avail if they are not understood and implemented appropriately (Weng, 2011). Transparency and enforcement are particularly essential for an effective fiduciary structure. 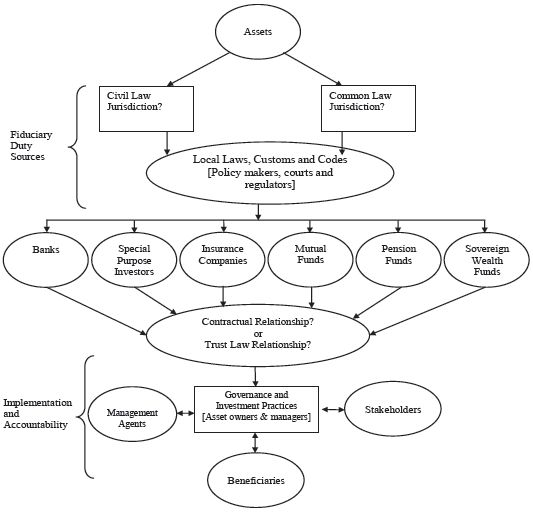 Fiduciary relationships have ancient roots, but understanding and implementation of fiduciary duties are dynamic. Fiduciary norms regularly evolve in response to changes in society, the economy and knowledge.

Following the collapse of the South Sea Bubble in the early 18th century, English courts required trustees to limit investments to government debt and securitized mortgages. As circumstances changed, American courts loosened investment restrictions and expanded allowable investments to those that would be purchased by a prudent man in managing his own affairs. The tables turned again in 1869, when American courts and legislatures excluded corporate stock and reverted to a more conservative legal list of allowable investments. In the 1970s and 1980s, common law jurisdictions transitioned to Modern Portfolio Theory (MPT) as the controlling concept for investment fiduciaries, looking at investment risk on a portfolio (rather than individual investment) basis. At the end of the 20th century, reference to practices of similar prudent expert investment fiduciaries and use of MPT were firmly established as the operative fiduciary standards (Hawley, Johnson, and Waitzer, 2011).

However, changes in the markets and risk environment have again brought many jurisdictions to a point where understanding of fiduciary duty has begun to change. A number of factors are driving this current fiduciary duty evolutionary cycle (Hawley, Johnson, and Waitzer, 2011). Among them are: